On September 27, NYK received approval in principle (AiP) from ClassNK for an ammonia bunkering vessel (ABV) that is currently being researched and developed. This is the first time in Japan that a shipping company has independently obtained AiP for an ABV from ClassNK.

The NYK Group has set a long-term goal of achieving net-zero emissions by 20501 to reduce GHG emissions in its oceangoing shipping business and is developing zero-emission ships that use ammonia, hydrogen, and other marine fuels having a low environmental impact. The ABV that received this AiP is scheduled to be used for ammonia bunkering, which is expected to become more common in the late 2020s.

NYK’s Project Engineering Team (PET)2 — newly established on October 1, 2021, within the Technical Group of NYK — was in charge of creating the various drawings necessary to obtain the AiP from ClassNK. PET created its own design drawings by themselves instead of those that had previously been made by shipyards and design companies and used an advanced method of creating 3D models3 linked to the drawings in the initial conceptual design stage. 3D modeling is usually done in the detailed design stage after the shipbuilding contract has been signed. The 3D models enabled for more in-depth discussions to take place about risk assessments of hazardous locations and escape routes during the HAZID (Hazard Identification Study)4 in the process of obtaining the AiP and allowed for specifications that incorporate sufficient safety measures against the toxicity and corrosiveness of ammonia to be devised.
The 3D model was used for the first time as a partial replacement of 2D drawings in ClassNK’s AiP drawing-approval process, significantly expanding the role of 3D models in future development projects. NYK will continue to maximize opportunities for the use of 3D data by further expanding its application to concept development, construction, and ship management. 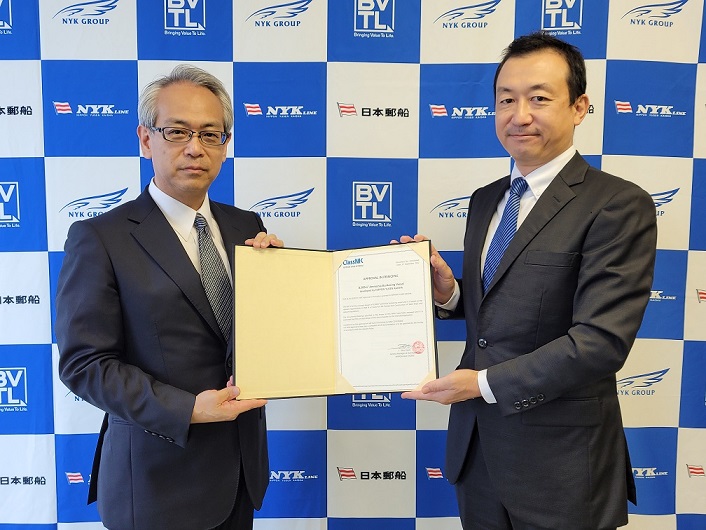 In devising the concept for the ABV, NYK has utilized knowledge gained from the liquefied natural gas (LNG) fuel supply system of Japan’s first LNG-fueled car carrier, which we have been operating since October 2020, and Japan’s first LNG bunkering vessel, which is operated by our affiliate Central LNG Marine Fuel Japan Corporation.

In addition, NYK has launched its new NYK GREEN EARTH brand to emphasize NYK’s ESG efforts to create new value initiatives for low carbon and decarbonization through green businesses such as the development of next-generation fuels, including ammonia and hydrogen. The NYK Group will encourage new value creation as a sustainable solution provider in order to strongly promote ESG management.
Source: Nippon Yusen Kaisha