Ocean LNG has dominated in terms of long-term liquefied natural gas (LNG) import volumes for contracts signed by key purchasing companies for the year 2019, with almost 47% of the global contracted capacity, according to GlobalData, a leading data and analytics company.

The company’s latest report, ‘Global Long-Term LNG Contracts Review, 2019 – Golden Pass Signs High Volume Contract with Ocean LNG’, reveals that Ocean LNG signed the biggest long-term LNG contract for 2019 with Golden Pass Products. According to the contract, Golden Pass Products will supply Ocean LNG with 15.6 million tonnes per annum (mtpa) of LNG for a period of 20 years, from 2024 to 2044. The gas will be supplied from the Golden Pass II LNG liquefaction terminal in Texas, US. 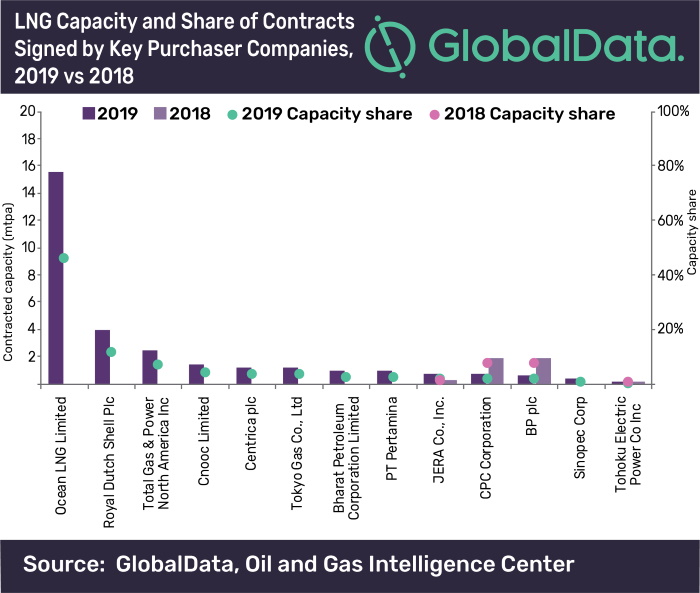 Sunrita Dutta, Oil and Gas Analyst at GlobalData, explains: “Ocean LNG is a joint venture (JV) between Qatar Petroleum, which owns a 70% stake, and Exxon Mobil Corporation, with 30%. The JV will market LNG produced from Qatar Petroleum’s projects located outside Qatar.

“As Ocean LNG has contracted the entire LNG production from the Golden Pass terminal in the US, in which Qatar Petroleum holds a 70% stake, the contracting volumes are high.”

Dutta concludes: “As per the contracts signed, Royal Dutch is to receive 2mtpa of LNG volumes from both Cabo Delgado, Mozambique, and Texas, US. Total Gas America is set to receive its signed contracted LNG volumes of 2.5mtpa from Louisiana in the US for 15 years commencing 2023”.
Source: GlobalData