Ocean transport of the first lot of railway coach to Myanmar completed: The first Japanese brand-new coach since its democratization

“K” Line Logistics, Ltd., a subsidiary company of Kawasaki Kisen Kaisha, Ltd. (“K” Line), has been entrusted with the transport business of the Japanese brand-new railway coach to Union of Myanmar, accepted an order by the Japanese original contractor and recently completed its ocean transport with 6 coaches.

The “Yangon-Mandalay Railway Improvement Project Phase I”, managed by the Official Development Assistance (ODA) loaned by the Japanese Government, includes the installation of railway coach of 24 units in total, exported from Japan and recent 6 units as first lot of this project are the first imported Japanese brand-new coaches, since its democratization in 2011.

On September 5, 2020, discharging operation of goods from ocean vessel was performed at Thilawa port upon her arrival. On that day, “K” Line Group has welcomed the top leaders of Myanma Railways and many others, who have kindly attended lift off discharging operation of coach one by one from vessel’s hatch, land transport by large trailer from vessel side to the sidetrack, located nearby pier and final handling of “rail on” operation by crane. 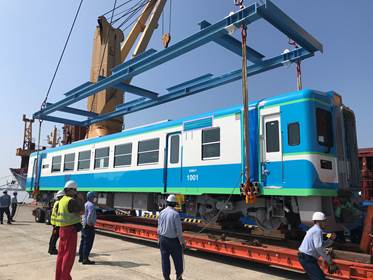 Recent transport of railway coaches was “K” Line’s second ODA business carriage to Myanmar, since its first entrusted project of carrying 3 ferry boats onboard from Hiroshima, Japan to Yangon, which were granted to Myanmar as Grant Aid program by the Japanese Government, back in 2014. Those 3 ferry boats, named “Cherry 1, 2 and 3”, which are now engaged in the shuttle passenger service between Yangon and Dala.

As an integrated logistics company corporate group grown from a shipping business, our corporate principle is to help enrich the lives of the people. We do hope that logistics services provided by the “K” Line Group will contribute to creating a society for people all over the world including Myanmar to live well and prosperously.
Source: K-Line