Rapid growth in free trade zones – where economic activity is driven by reduced taxes and customs controls, light regulation and limited oversight – is unintentionally fostering growth in counterfeit goods trafficking, according to a new report by the OECD and the EU’s Intellectual Property Office.

Trade in Counterfeit Goods and Free Trade Zones (here) finds that exports of counterfeit and pirated goods from a country or economy rise in parallel with the number and size of free trade zones it hosts. Comparing growth in free trade zones, measured by the number of firms and employees in the zone, and customs seizure data from around the world shows that establishing a new free trade zone is associated with a 5.9% rise in the value of counterfeit exports from the host economy.

“This is clear evidence that free trade zones are being used by criminals to traffic fake goods,” said OECD Public Governance Director Marcos Bonturi, launching the joint report with EUIPO Executive Director António Campinos at a meeting of the OECD Task Force on Countering Illicit Trade. “We want this to be a call for action, and we will be working in the months ahead to help free trade zones step up their efforts to stop illicit trade, while at the same time maintaining their role as facilitators of legal trade.”

There are more than 3,500 free trade zones, often located at key ports, in 130 countries or economies in North and South America, the Asia-Pacific region, Europe and Africa, up from just 79 spread across 25 countries or economies in 1975. The special zones facilitate trade by offering businesses advantageous tariffs and lighter regulation on financing, ownership, labour and immigration, and taxes. They have helped emerging economies to attract foreign investment and generate jobs and growth, although they have also benefitted wealthier economies such as the United States, Singapore and Hong Kong. 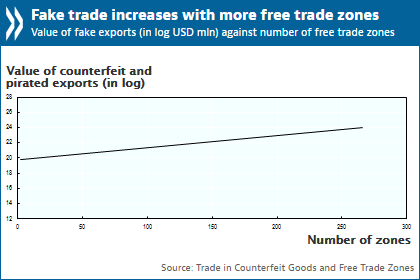 As well as infringing trademarks and copyright, counterfeit and pirated goods entail health and safety risks, product malfunctions and loss of income for companies and governments. Earlier OECD work has shown that 2.5% of imported goods worldwide, and 5% of European Union imports, are fakes.
Source: OECD