The global economic expansion is strengthening, as robust investment growth, an associated rebound in trade and higher employment drive an increasingly broad-based recovery, according to the OECD’s latest Interim Economic Outlook.

The pace of expansion over the 2018-19 period is expected to be faster than in 2017, but tensions are appearing that could threaten strong and sustainable medium-term growth.

The OECD projects that the global economy will grow by 3.9 percent in both 2018 and 2019, with private investment and trade picking up on the back of strong business and household confidence. Inflation is set to rise slowly. The projections reflect slight improvements in the global economy since the previous Economic Outlook in November 2017, and cover all G20 economies.

The Outlook underlines the boost to short-term growth expected from new tax reductions and expected spending increases in the United States and expected fiscal stimulus in Germany, but also points out a number of financial sector risks and vulnerabilities, as well as those posed by a rise in protectionism. 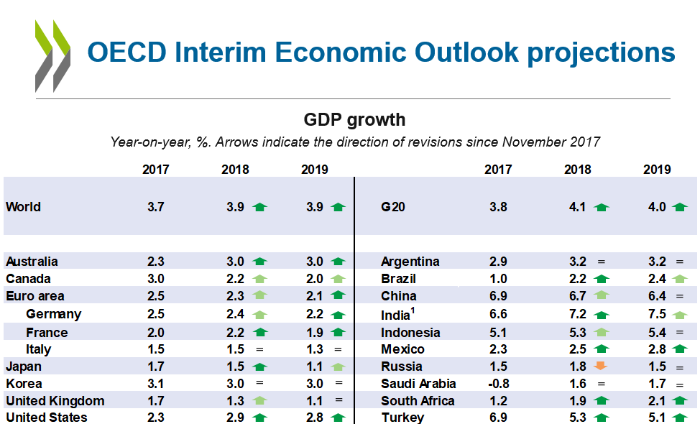 “Growth is steady or improving in most G20 countries and the expansion is continuing,” said OECD Acting Chief Economist Alvaro Pereira.

“In this environment, an escalation of trade tensions would be damaging for growth and jobs. Countries should rely on collective solutions like the Global Forum on Steel Excess Capacity to address specific issues. Safeguarding the rules-based international trading system is key,” Mr Pereira said.

The Outlook underlines a range of policies that would help to sustain medium-term growth. It urges countries to add dynamism to structural reform efforts, particularly in the areas of taxation and skills, to boost employment and inclusive growth over the long term. The fiscal stance in advanced countries should support but not overstimulate demand.
Source: OECD