The project, part of a series of high value digitisation upgrades SRO has completed for the business since 2018, has resulted in a more efficient and accurate inventory for MODEC in Ghana streamlining its onshore headquarters in Accra with its vessels the FPSO Kwame Nkrumah (KNK see attached picture) in the Jubilee Oil Field, and FPSO Professor John Evans Atta Mills (JAM) in the Tano Ennyera Ntomme (TEN) Oil Field.

The latest piece of work saw SRO improve MODEC’s current system, which was prone to ordering errors resulting in stock lying in storerooms for longer than necessary and purchasing orders being raised to order materials which were already held in stock.

SRO, appointed because of its status as a Gold Accredited IBM Business Partner, originally improved IBM’s Maximo asset management software by redeveloping all of the workflows in the system, including service requests, work orders, purchase requisitions, requests for quotations, purchase orders and deferrals. It also built in a feature to record shipping manifests to track outbound and inbound deliveries and a label printing function so that all items received are automatically given a barcode. 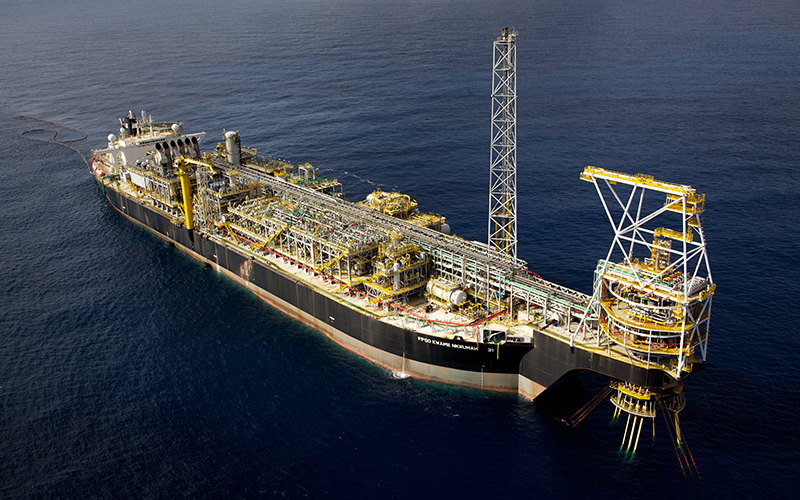 The projects for the Japan-headquartered business took more than 1,300 hours to implement and saw SRO delivering staff training on the new system.

SRO senior consultant Jonathan Ritchie, who led the projects, said: “The business processes MODEC was working under were not fit for purpose, with various records being work-flowed to the wrong people for approval and then having to be moved around, resulting in delays. After improving these areas using IBM’s Maximo, we implemented some additional features and functionalities to help with the inventory movements between the vessels and onshore storerooms feeding offshore storerooms, resulting in increased speed and accurate inventory usage and volumes.

“As an example, before implementing these changes in Maximo, if MODEC needed ten of a particular item and there were five in stock, the old system would just reorder ten and the five would remain in stock instead of being used. The new system would just order five.”

The latest piece of work is just one of a package of improvements SRO has made for MODEC, which employs more than 5,000 people worldwide. The client, recognised as a leader in floating production vessels for the oil and gas industry, was already using IBM’s Maximo, but an audit carried out by SRO revealed the software was not being used to its full potential. SRO’s first job was to optimise the Maximo system as well as installing its own SDR data replication software, which synchronises data across the business.

Since then, the Manchester IT expert has carried out a number of projects and developed a close relationship with MODEC.

Part of SRO’s work has involved training MODEC’s workforce in the software and helping change behaviours.

Ritchie said: “Just prior to the latest project, we created a document that MODEC could share with employees to enable them to get buy-in for the improved system, which provided a number of tips for rolling out new functionality to the users, such as ensuring they’re involved as early as possible in the project during the requirements gathering phase and user acceptance testing.

“Because the system was not fit for purpose originally, the level of trust in Maximo when we first started working with them was low, so the challenge has been in building up that trust. The work we’ve done with MODEC has been transformational for the business in saving time and money and improving accuracy in an industry that demands the highest standards.”

Fafa Buama, the computerized maintenance management system administrator for MODEC, has worked closely with SRO over the past two years.

She said: “SRO has assisted MODEC in developing our Maximo system for best use throughout the business. Their expertise, both in the product and our industry, have allowed them to help us define our Maximo strategy, and refine the system to meet our exact business need, whether this is through the extensive planning and workshopping for projects with our key stakeholders, or the ongoing flexible implementation of required changes and fixes.

“Rather than just delivering to our requirements during projects, they scrutinise and challenge them to ensure that our business processes are always best practice, due to their agile approach. With such practices is in place, focus on business value and stakeholder engagement is key, and project results to date have often resulted in quality but early and under-budget successfully implemented results.

“The recent Inventory Reorder and Expediting project has helped improve upon the core Maximo purchasing and inventory functionality to better suit our business which should lead to direct savings in inventory costs.”
Source: SRO Solutions

2020-09-09
hellenicshippingnews..
Previous: Combined Maritme Forces And EUNAVFOR Discuss Counter-Piracy Campaigns
Next: India’s economy could yet avert an L-shaped curve from here on