Oil investors concerned about supplies due to booming U.S. output and uncertainty over how OPEC and its allies will implement production cuts may have reason to worry about demand as well.

A look at refining profits in Asia shows consumption may not be keeping with supplies in the world’s top oil-consuming and importing region. Even as countries such as China, South Korea and Japan gear up for lower temperatures during the year-end winter season when demand for fuels such as diesel typically peak, processing gains from turning crude into the heating oil is at the lowest level in at least eight months. 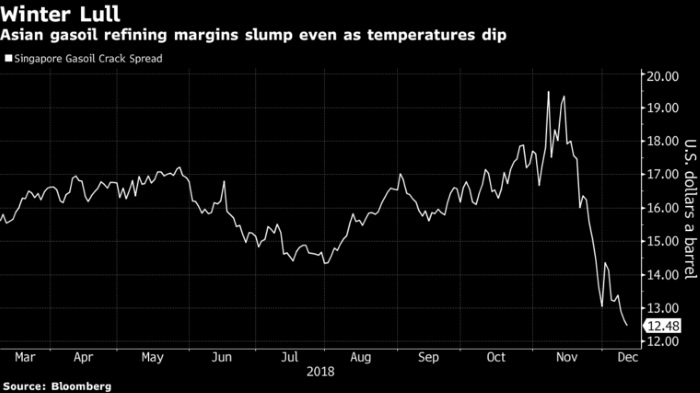 The fall in the so-called gasoil crack spread, along with lower gasoline refining margins, has been exacerbated by the release of additional Chinese quotas that may see 2018 exports rise more than 10 percent year-on-year. Profits from making gasoil weakened almost 35 percent in the past month in Singapore, the regional oil hub, while gasoline returns are hovering near their lowest level in at least four years. 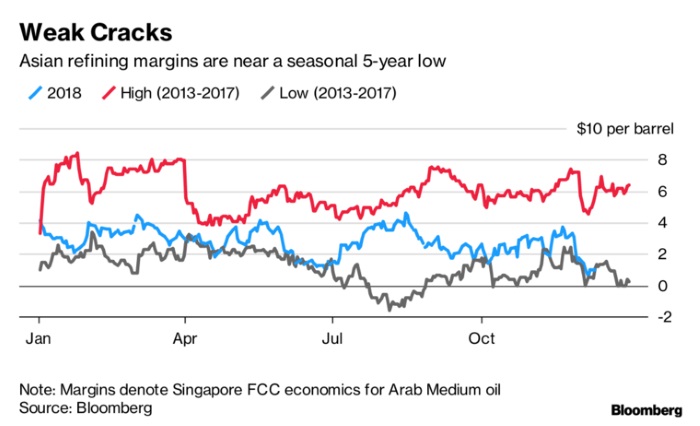 Refining margins in Asia at sophisticated plants that are able to produce more lucrative fuels are also near five-year lows on a seasonal basis, ahead of the planned start-up of new, mega facilities in China’s Dalian and Zhejiang next year. Oil demand growth in Asian emerging markets remains in focus as weaker local currencies and higher crude prices could weigh on countries’ purchasing and consuming power, Malaysia’s state-owned energy company Petronas cautioned this week.
Source: Bloomberg