Oil Set for Weekly Gain on Rebalancing Signs From U.S. to China

Oil is heading for the biggest weekly gain since mid-September as a drop in U.S. crude stockpiles and near-record Chinese imports added to signs the global market is rebalancing.

Futures added 1.5 percent in New York. China’s crude imports last month jumped to the second-highest on record, customs data show, while U.S. government data on Thursday showed crude inventories fell by 2.75 million barrels last week. OPEC is said to expect a global oil glut will be gone a year from now. President Donald Trump is expected on Friday to disavow a deal with Iran that helped revive its oil exports, while stopping short of abandoning it. 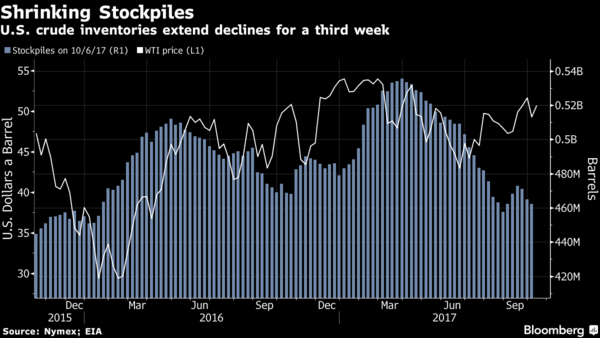 “Crude oil is starting the day watching the strong import data from China, and ending the day listening to Trump’s announcement of his new strategy towards Iran,” said Olivier Jakob, managing director of consultants Petromatrix GmbH in Zug, Switzerland.

Oil has rebounded from the biggest weekly loss since May on signs that output cuts led by the Organization of Petroleum Exporting Countries are draining a surplus. OPEC expects the effort to succeed by the end of the third quarter of next year, said people familiar with the group’s internal forecasts. The prediction assumes that production in Libya and Nigeria will remain at current levels and U.S. shale output will expand by no more than 500,000 barrels a day next year, two people familiar with the matter said.

West Texas Intermediate for November delivery was at $51.35 a barrel on the New York Mercantile Exchange, up 75 cents, at 10:10 a.m. in London. Total volume traded was in line with the 100-day average. Prices are up 4.1 percent this week.

Brent for December settlement was at $57.19 a barrel on the London-based ICE Futures Europe exchange, up 1.7 percent or 94 cents. Prices are up 2.8 percent this week. The global benchmark crude traded at a premium of $5.54 to December WTI.

Prices also rose amid ongoing tensions in OPEC member Iraq between the central government and the country’s semi-autonomous Kurdish region. At least 6,000 Kurdish fighters, known as peshmerga, have been deployed in the oil-rich Kirkuk province following “threats” of attack from Iraqi forces, media network Rudaw reported.

“News about rising tensions in the Kurdish region in Iraq are keeping the market on its toes,” said Jens Naervig Pedersen, senior analyst at Danske Bank A/S in Copenhagen. “Geopolitical risks in general have become a renewed source of uncertainty and volatility in the oil market recently.”

The International Energy Agency predicts progress on clearing the glut may stallnext year, while OPEC Secretary-General Mohammad Barkindo said Sunday that further steps might be needed to sustain the recovery into 2018. The agreement, with allies including Russia, is due to expire at the end of March.

China’s overseas crude purchases averaged about 9.04 million barrels a day in September, up 13 percent from the previous month, according to Bloomberg calculations using General Administration of Customs data released Friday.
U.S. crude production dropped by 81,000 barrels a day to 9.48 million a day, according to the Energy Information Administration. Crude supplies at Cushing, Oklahoma, rose for a seventh week to 63.8 million, while gasoline inventories expanded by 2.49 million barrels to 221.4 million.

2017-10-13
hellenicshippingnews..
Previous: Oil market bulls are wrong to forecast a pick-up in prices — and here’s why
Next: Coal stocks at China power generators down 2.6% over holidays