Oil prices sank more than 4% on Wednesday after global demand fears were revived by weak economic data from China and Europe and an unexpected build in U.S. crude inventories.

The global benchmark rose 4.7% on Tuesday, its biggest daily percentage gain since December.

China reported weak data for July, including a surprise drop in industrial output growth to a more than 17-year low, underlining widening economic cracks as the trade war with the United States intensifies.

The global economic slowdown, amplified by tariff conflicts and uncertainty over Brexit, is also hitting European economies. A slump in exports sent Germany’s economy into reverse in the second quarter, data showed.

The euro zone’s GDP barely grew in the second quarter of 2019.

“The data out of China, the potential recession brewing in Germany, all of that is playing into global demand worries,” Phil Flynn, an analyst at Price Futures Group in Chicago. “Today, we’re back in fear mode.”

The U.S. Treasury bond yield curve inverted for the first time since 2007, in a sign of investor concern that the world’s biggest economy could be heading for recession. 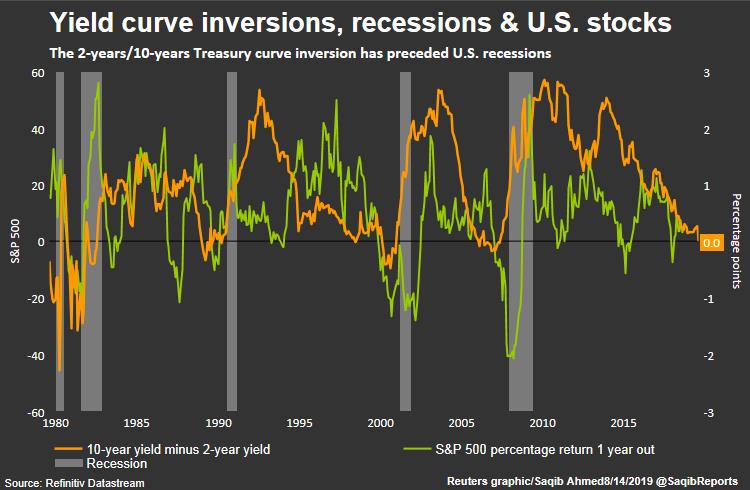 A second week of unexpected builds in U.S. crude inventories added to the pressure on the oil markets. [EIA/S]

U.S. crude stocks <USOILC=ECI> grew by 1.6 million barrels last week compared with analysts’ expectations for a decrease of 2.8 million barrels as refineries cut output, the Energy Information Administration said in its report. At 440.5 million barrels, inventories were about 3% above the five-year average for this time of year, the EIA said in its weekly report.

Gasoline stocks decreased, however, fell by 1.4 million barrels, compared with analysts’ expectations in a Reuters poll for an increase of 25,000 barrels, as demand jumped to a record 9.93 million barrels per day, according to EIA data going back to 1991. <USOILG=ECI> 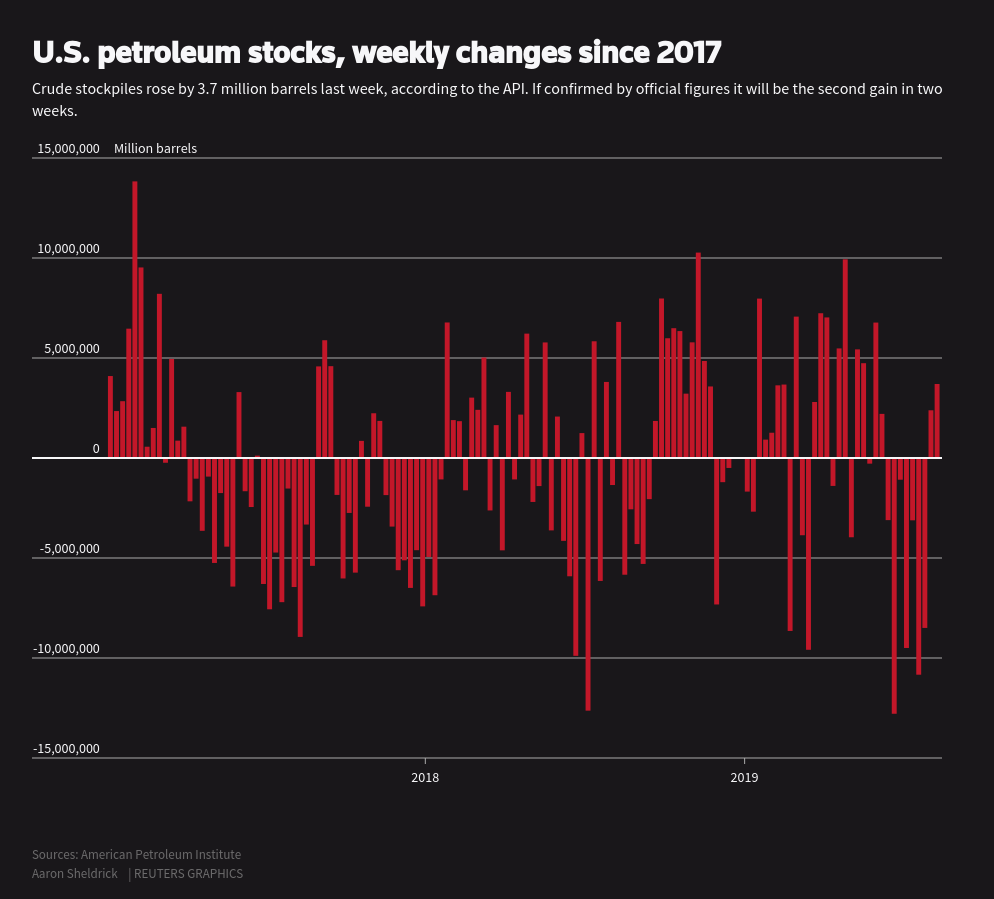 “We do expect Brent to continue recovering to $65 per barrel in the coming months,” Commerzbank analyst Carsten Fritsch said.

“Oil demand in China and the United States is unlikely to weaken noticeably as a result of the trade conflict, though if this were to happen, Saudi Arabia would further reduce its output.”
Source: Reuters (Additional reporting by Bozorgmehr Sharafedin in London, Aaron Sheldrick in Tokyo and Roslan Khasawneh in Singapore; and Marguerita Choy and Jane Merriman)