Once an OPEC quota buster, Iraq struggles to raise oil output due to port limitations

Iraq’s crude oil production has stagnated in recent months, despite a rising quota under the OPEC+ accord, largely constrained by its inability to export more volumes through its southern port on the Persian Gulf.

Near-term prospects for increasing loading volumes at its aging Gulf terminal facilities at Basrah are dim, Iraqi officials acknowledge, preventing any meaningful gains in production that would allow the cash-strapped country to benefit from high oil prices. And the degraded pipelines connecting the terminal to loading jetties are a major risk for a catastrophic environmental disaster.

Iraq produced 4.38 million b/d of crude in June, including from the semi-autonomous Kurdistan region, according to the Platts OPEC+ survey by S&P Global Commodity Insights, barely up from its March output level of 4.34 million b/d.

Iraq’s southern export outlet has long been recognized as a bottleneck for the country’s production. 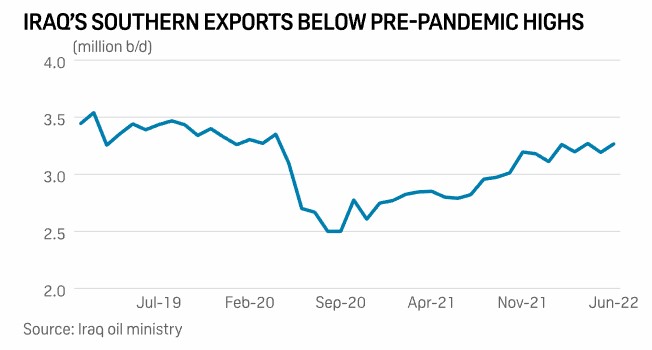 From March to June, exports from Basrah averaged 3.231 million b/d, according to data from the Iraqi oil ministry.

That compares to 3.351 million b/d in April 2020, when OPEC and its allies briefly abandoned their production quotas in a dispute over COVID-19 strategy and allowed countries to pump at will, records show.

The figures indicate that even restoring Iraq’s southern exports back to that April 2020 level would still require the country to hold production below its OPEC+ quota, as storage facilities in Basrah are filling up, domestic refineries and power stations are limited in what they can consume, and output from Iraqi Kurdistan, which is exported through the Turkish port of Ceyhan, has hit a recent ceiling of around 440,000 b/d.

Repairs overdue
Flows at the Basrah port are hampered by the degrading of two sea lines feeding jetties from the terminal. Bulges have appeared at the end of these lines in recent months, said sources familiar with the matter, who fear they could burst and cause a major oil leak into the Gulf.

This forced Basrah Oil Co. to reduce the jetties’ pumping rates by more than 25%, to about 54,000 b/hour from previous levels as high as 70,000 b/hour, according to daily terminal reports seen by S&P Global Commodity Insights.

The sea lines were laid in the late 1970s and have been due for replacement for decades, though the work has never been performed due to financing problems, political turmoil and other delays.

The sea lines are supplemented by four single-point moorings that have increased their flows to partially compensate for the jetties’ decline.

Iraqi officials are aiming to get southern export capacity up to 3.35 million b/d by September, the deputy director of state oil marketer SOMO told S&P Global Commodity Insights in a recent interview.

“For the time being, this is what we believe we can achieve, taking into account not only the limitations on export capacity, but also rehabilitation activities that may cause stoppages sometimes,” Ali al-Shatari said. “This number of course might go higher, but I’m a bit conservative until I see the plans of the export facilities development go forward.”

Of that volume, SOMO expects shipments of Basrah Heavy grade to be around 1.1 million b/d in July and Basrah Medium to average 2.2 million b/d, Shatari said.

Platts Analytics forecasts that exports are likely capped at that maximum level for the rest of the year, with sustainable production capacity at 4.54 million b/d, though “supply risks are to the downside on likely upgrade delays, political uncertainty and security issues.”
Delayed projects

Iraq, which until its production began plateauing in recent months was regularly criticized by its OPEC+ counterparts for breaching its quota, is leaving hundreds of millions of dollars in oil sales on the table due to its struggles to raise exports, with Dated Brent near $110/b.

The current high price environment is an opportunity for Iraq to raise the financing needed to replace its aging sea lines, which would likely take around two years to complete from the signing of the contract, according to people who have studied the project. That would raise the Basrah Oil Terminal jetties’ capacity by 700,000 b/d to around 2.0 million b/d, in addition to four single-point moorings with a capacity of 2.2 million b/d.

A third sea line to the jetties was laid years ago without valving ends and is scheduled to be commissioned by the end of 2023, which would add another 800,000 b/d of export capacity, the Iraqi oil ministry has said, though this has been delayed several times, including by the coronavirus pandemic.

Those projects, along with completion of the 140,000 b/d Kerbala refinery and the addition of a 70,000 b/d crude distillation unit at the Basrah refinery, both expected by mid-2023, would be major boons for unlocking more Iraqi crude production.

In Iraq’s fractured political environment, however, none of those timings can be considered certain bets.
Source: Platts