Scrubber uptake has been quite widespread in the VLCC segment, with shipbroker Gibson estimating that up to 31% of the existing fleet already fitted with the systems, while by the end of 2021, that share is expected to increase to about 40%. Scrubber make more financial sense to larger ships, where the potential for savings from the use of the cheaper, high-sulphur fuels is bigger. Still, 2020 didn’t offer the savings expected as the spread between high-sulphur and low-sulphur fuels was diminished by the drop in oil price.

In its latest weekly report, shipbroker Gibson said that “after a turbulent 2020 that saw a brief oil price war, a global pandemic and oil demand destruction, it is perhaps not surprising that to many it feels like concerns surrounding IMO2020 have long gone. The transition to compliant bunker fuels went relatively smoothly, despite some teething issues. Prior to the onset of the pandemic, owners of scrubber tonnage enjoyed a very healthy discount for high sulphur fuel oil (HSFO) versus very low sulphur bunker fuel (VLSFO), which averaged between $250/tonne and $300/tonne in key bunkering hubs during December 2019/January 2020. However, the pandemic driven collapse in oil prices meant that the spread sunk to just $40 – $60/tonne between April and November last year. For scrubber tonnage, this meant that the savings for burning HSFO sunk from $16,000/day in January 2020 to just $3,000-$4,000/day (VLCCs trading TD3C route, slow steaming basis) for most of last year. Despite such a dramatic decline, the scope for scrubber cancellations has been limited due to contractual obligations with shipyards and scrubber manufacturers”.

Gibson added that “more recently, scrubber economics have started to change once again. The latest upward trend in oil prices has offered some welcome news to those who invested in this technology, with the spread between HSFO and VLSFO widening to around $80 – $100/tonne and scrubber savings climbing above $5,000/day for VLCCs”. 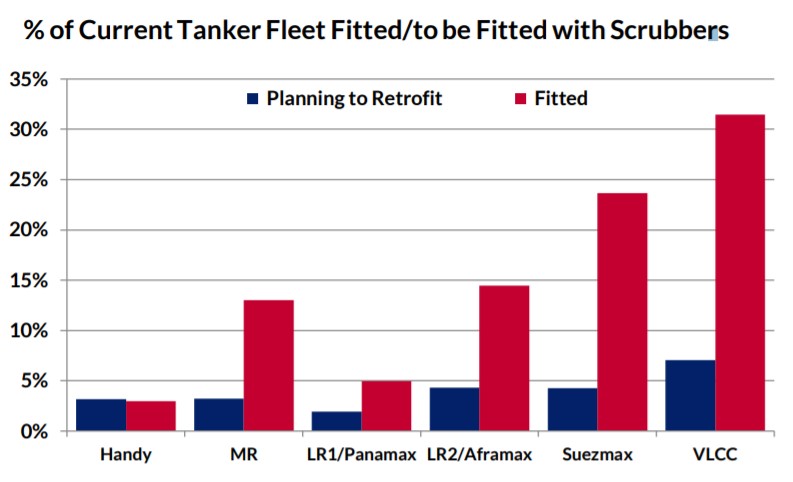 According to the shipbroker, “in terms of statistics, the scrubber uptake is the highest in the VLCC fleet, followed by Suezmaxes. Scrubber penetration is considerably lower for smaller size groups. According to Gibson’s records, scrubbers have already been installed on 31% of the existing VLCC fleet, while another 7% is yet to be retrofitted. In addition, 32% of current VLCC orderbook is expected to be fitted with the technology. This means that close to 40% of the VLCC fleet could be scrubber fitted by the end of the year. The actual penetration of scrubbers in the spot market is expected to be even higher when excluded tonnage (NITC, sanctioned/storage vessels) are accounted for, while the anticipated demolition over the course of this year will also reduce the absolute number of non-scrubber tankers”, Gibson noted..

“Although the scrubber uptake is significant for larger crude carriers, we are unlikely to see further exponential growth. Major scrubber manufacturers reported a sizable slowdown in new scrubber orders last year. The regulatory scrutiny is also expected to intensify. By now, the list of ports where the use of scrubbers is banned is extensive, while some governments are calling for a gradual phase out of the technology (EU) or in extreme cases an outright ban (Canada). It seems inevitable that the list of scrubber restrictions is only going to increase going forward. For now, however, while tanker supply/demand conditions remain severely unbalanced, even a modest scrubber premium could mean staying afloat and earnings above OPEX”, Gibson said. 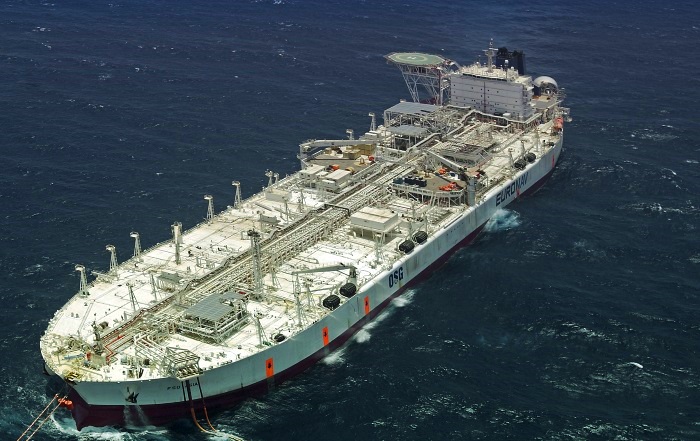 Meanwhile, in the tanker market this week, in the Middle East, Gibson said that “once again, it is a week where there is hardly any VLCC market enquiry to work with, aside from the intra-Chinese deals, which bolster the monthly figures but gives little to the other Owners outside of that. Eventually we saw one market enquiry that attracted over 10 offers, which inevitably led to a new low being set. Last done to the East is 270,000mt by ws 25 (2021 ws rates) on an over 15 year built ship but probably nearer to 270,000mt x ws 33 for modern and we estimate that a run West would be in the region of 280,000mt by ws 20 (2021 ws rates). Suezmax tonnage has only fared slightly better this week for cargoes destined to the East and rates have peaked at 130,000mt by ws 40. Unfortunately for voyages West, Owners have not been able improve on levels and the week ends with 140,000mt by ws 8 to Europe. Aframaxes in the AGulf are ticking over. Generally East rates are showing some improvements due to delays and bunker prices increasing, but this is yet to trickle into the AGulf region where rates remain under pressure from the sheer number of vessels available. Rates are currently trading at around 80,000mt x ws 60/62.5 level (basis 2021 ws rates)”, the shipbroker concluded.
Nikos Roussanoglou, Hellenic Shipping News Worldwide