One year of the Seafarers Happiness Index – What have we learned?

The Mission to Seafarers has launched a new website for its ongoing Seafarers Happiness Index, a seafarer welfare survey designed to monitor and benchmark seafarer satisfaction levels across the industry.

The website will act as a repository for the data collected during the survey, and will create an open framework for improvement which shipping companies can adhere to in order to build a happy, sustainable workforce. 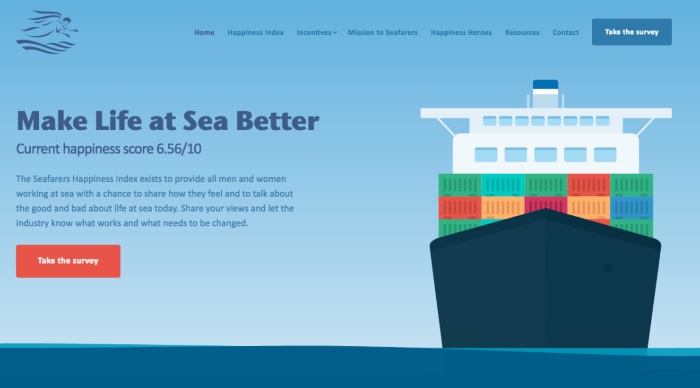 Findings from 2018 welfare survey published on new Happy at Sea website;
Calls for all seafarers to complete the survey

The findings, which are fully anonymised, recognise both the positive and negative aspects of working at sea, from a seafaring perspective, as well as flagging any areas of concern.

In 2018, the Mission published a series of reports from the survey which highlighted a growing concern around the relationship between mental health and connectivity at sea. Data showed that seafarers with access to internet onboard reported much higher levels of happiness, whereas those without it marked lack of connectivity as a major source of discontent.

The reports also exposed a number of troubling issues experienced by seafarers during their time at sea, ranging from the unethical to the illegal. This included companies cited for breaking labour laws. This was especially prevalent when it came to the lashing of cargoes without pay, but also included hours of rest not being followed and overtime agreements being reneged on.

There were also a number of incidents raised by female crew around sexual harassment at sea. In some cases, female seafarers also reported feeling lonely or isolated, especially when they were the only woman onboard.

Not all of the findings have been negative, however. The survey has also painted an inspired image of life at sea, with many seafarers giving praise to employers for providing onboard connectivity, nutritious meals and exercise equipment. Seafarers also commented on the strength of the seafaring community, citing onboard working relationships and friendships as the best part of the job.

Ben Bailey, Director of Advocacy and Regional Engagement at The Mission to Seafarers, commented:

“Our Seafarers Happiness Index is designed to track crews’ evolving welfare needs and feelings about life at sea, by giving seafarers a platform to speak up and be heard.

“By creating a confidential channel of communication between seafarers and the industry, we have been able to create a blueprint for continued improvement within the industry and one that enables us to make recommendations as to how shipping companies can cultivate a workplace where crew members feel happy and supported.”

“One of these recommendations, for example, is for ship owners and managers to invest in a designated human resource management team in place to address concerns and to reflect the growing importance of seafarer mental health and wellbeing on board and at sea.

“The response we have received from the industry is overwhelmingly positive. We have been approached by a number of companies who are keen to hear the views of seafarers and who recognise the importance of having an anonymised feedback tool. We are already working with two major industry companies to provide bespoke surveys – both of which will be launched this year. However, our ability to reflect the views of seafarers is only as good as the feedback we receive. That is why encourage all seafarers to visit the Happy at Sea website to complete the survey.”
Source: Mission for Seafarers

2019-01-25
hellenicshippingnews..
Previous: GMS: Safety Training Sessions On the Forefront
Next: Baleària and Armon present the construction of the first and most sustainable smart fast ferry in the world powered by dual natural gas engines at FITUR