The final agreement between the family Onorato and the Chinese yard GSI of was signed today for the construction of two giant ro-pax vessels that will be utilized by Moby on the routes from and to the Sardinian ports. The official ceremony, that has seen the participation of the main Chinese authorities and the ship-owner Achille Onorato, marks a real historical turning point also and especially because of the characteristics of the new ships that score three world records.

The first record is related to their size: with an overall length of 237 metres for a width of 32 metres and a gross tonnage of 69,500 tonnes, but especially with a transport capacity of about 2500 passengers and 1300 cars the new ships will be the largest ro-pax operating in the world.

The second record is related to the green status: they will be equipped with the last generation hybrid scrubber and they will be also LNG ready, which means that they are willing for the passage from the traditional fuel to the natural gas.

The third record refers to the Chinese yards GSI that, even if on the plan of the interior is maintained for now the maximum reserve, will be engaged for the first time in the planning and realization of ships with the highest luxury standards for the passengers. The new vessels – according to Moby sources –will be the connection link between the traditional ferries and cruise ships: the interior spaces as well as the 550 cabins will have characteristics completely similar to those of the modern cruise vessels. 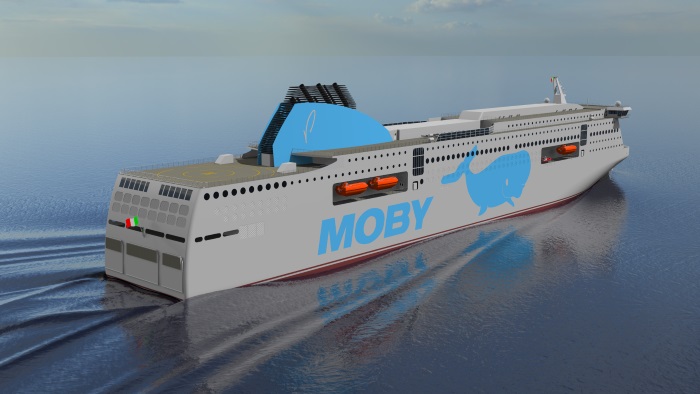 As highlighted today, during the signing ceremony of the final agreement, the first of the two sister vessels will be ready within 36 months, with keel laying scheduled in June 2020 and entry into service for the peak season of 2022. The second sister ship will follow six months after the first.

With almost four thousand linear meters of cargo space, the ships will also be equipped with an innovative loading system, with a central door that will allow direct access to the main garage and two side doors that will allow access to ramps reaching the upper decks, thus rationalizing and speeding the boarding operations.

The motor apparatus with a power of 10.8 megawatts will guarantee a particularly low fuel consumption and eco-friendly 23.5 knots with peaks close to 25 knots.

Today is signing and then the start of construction – said Achille Onorato, Ceo of the Moby Group – marks an essential stage in the strengthening plan of the Moby fleet and very shortly, we might confirm the option for another couple of ships with the same characteristics. These units, that will serve Sardinia, will represent a flywheel for the economy and tourism of the island that we are honoured to serve ensuring a better service, more and more accessible and environmentally sustainable”.
Source: Onorato Group