OPEC+ output policies and the pandemic’s path will continue to drive global oil prices in 2021, Fitch Ratings says. Although demand remains subdued because of the coronavirus pandemic, oil prices have increased materially since October 2020 due to OPEC+ production cuts, reduced oil inventories and increased investor optimism, supported by the vaccine roll-out in many countries. However, oil prices could still come under pressure, particularly in 1H21, and before effective vaccination programmes are fully underway.

Global oil demand could decline marginally in 1Q21 as many regions, including many European countries, have re-introduced mobility restrictions. As a result, demand will average 94.1 million barrels per day (mmb/d) in 1Q21 – 0.4 mmb/d lower than 4Q20, according to the International Energy Agency (IEA). However, this is still significantly higher than the 83.1 mmb/d in 2Q20 – the lowest level of demand in the past year – as current restrictions are generally less stringent and more localised than in April and May 2020. China’s quick economic recovery also supports oil demand. 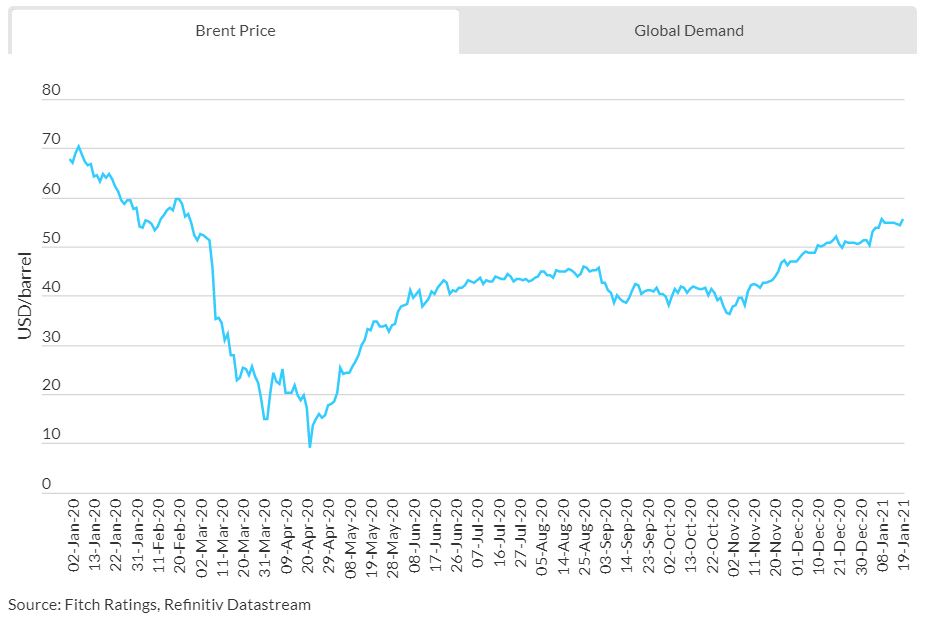 The positive effects of vaccination programmes on the oil demand recovery may not be visible for several months until a critical mass of population is inoculated. Mass vaccination is likely to lead to a sustainable improvement in oil demand, although there is some uncertainty about vaccines’ effectiveness against the most recent virus mutations.

OPEC+ output policies have been the main driving force behind the oil price recovery in 2020-2021. Saudi Arabia has recently taken a unilateral decision to cut production by one mmb/d in February and March, in addition to the cuts agreed by OPEC+ in December, which should reduce risks of oversupply notwithstanding the new lockdowns. OPEC countries effectively made a concession to Russia and Kazakhstan, which can now slowly increase production in February and March, while others keep their production flat. This decision highlights the difficulty of reaching a consensus at the January meeting and the risks of further disagreements, potentially making the alliance less efficient in managing production levels. 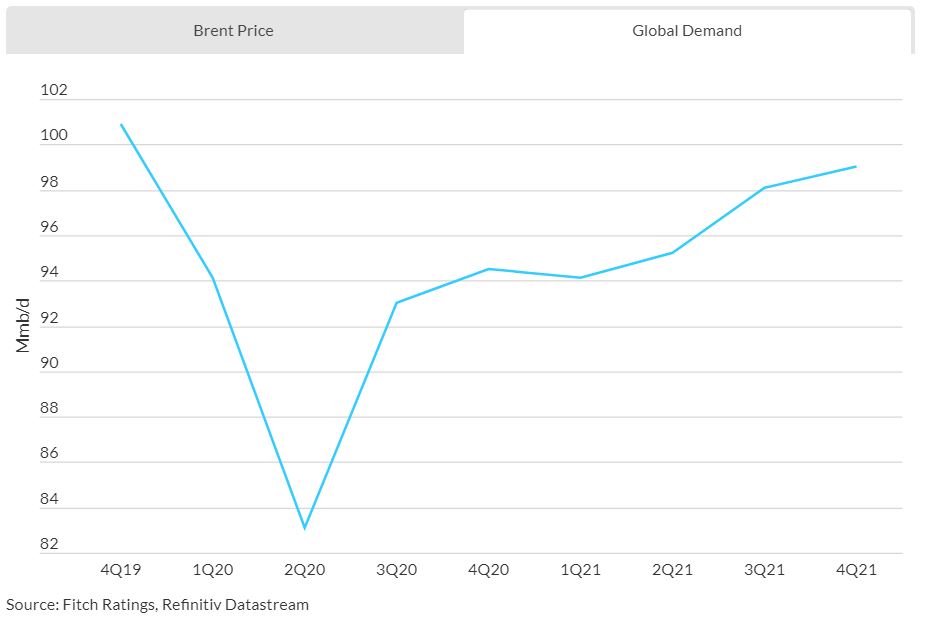 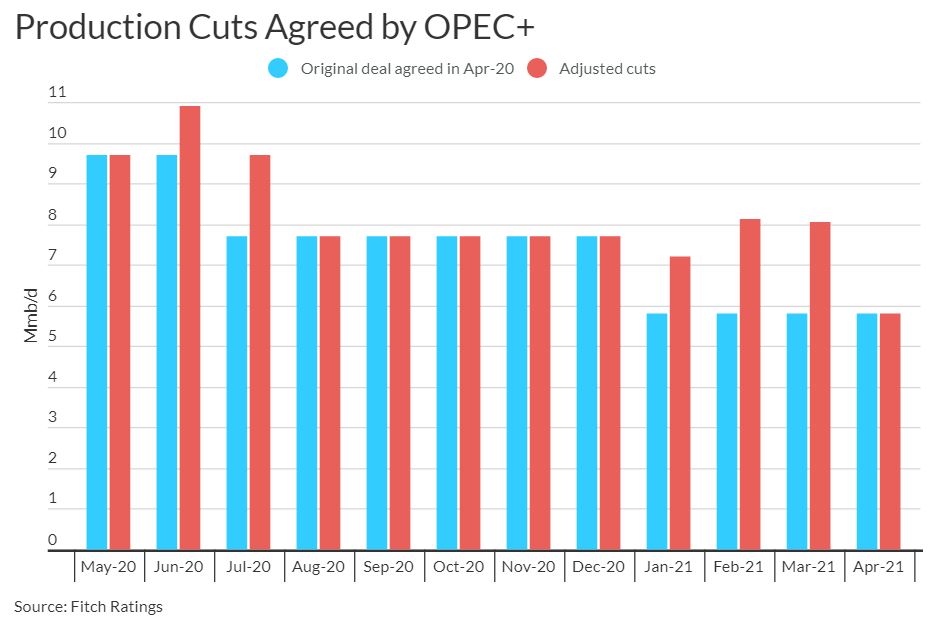 Reduced US shale oil output also helped to balance the global market. The country’s production averaged 10 mmb/d in May 2020, 2.75 mmb/d lower than in 1Q20. Production has partially recovered to 11 mmb/d in early 2021, driven by improved oil prices and an increasing number of active drilling rigs – although this is still 57% lower than in early 2020. US shale oil output may not reach its pre-pandemic levels in the next two to three years, while producers are focusing on optimisation and financial returns rather than growth. Joe Biden’s policy for the US shale sector is yet to be formalised. Although radical moves are unlikely, some industry incentives could be removed, limiting growth potential. 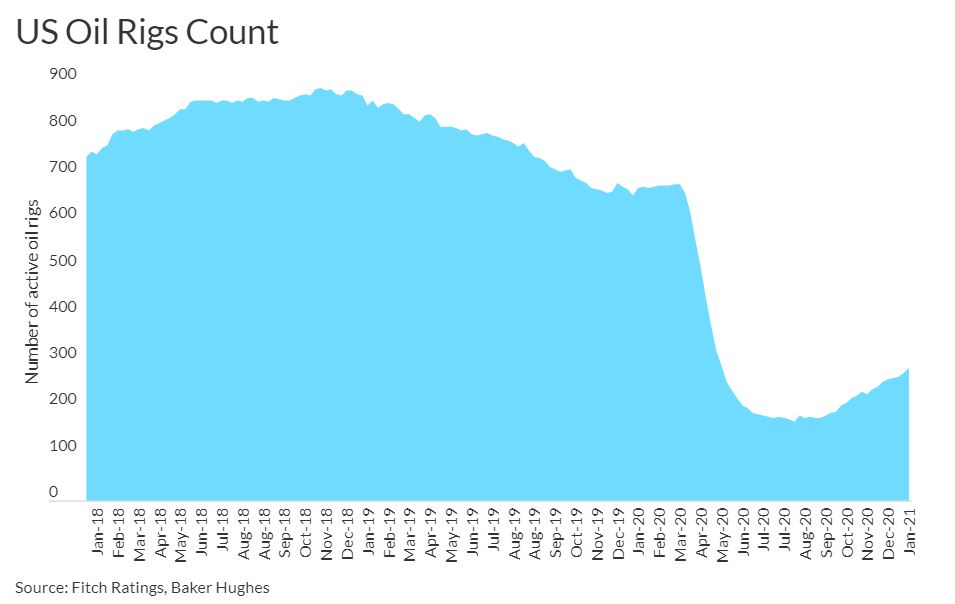 Although significant excess inventories were consumed in 2H20, oil volumes in storage remain high. Furthermore, there is huge unused production capacity in the market, mainly represented by Saudi Arabia, but also by Iran, which is subject to US sanctions. Should US policy towards Iran change, about two mmb/d of its unused capacity could get to the market, altering the supply-demand balance and making cooperation within OPEC+ more difficult.

About a third of our ratings in the oil and gas sector are on Negative Outlooks, particularly in North America. Although our oil price assumptions are unchanged, the recent recovery in prices alleviates pressure on the sector, which could reduce the conversion rate of Negative Outlooks to downgrades. Pressure on lower-rated companies with weak liquidity, particularly in the upstream segment, should also ease.
Source: Fitch Ratings

2021-01-22
hellenicshippingnews..
Previous: Oil price forecasts fall in the wake of the pandemic
Next: Big U.S. oil drillers have federal permits to mute effect of any Biden ban