Weak demand and soft crude oil prices mean that early next week the OPEC+ countries should extend their production restraint another six months. They will be rewarded with higher crude oil prices (unless the trade dispute significantly worsens, or further chaos comes out of the G20 meeting). It would be in the best interests of the group to extend this production restraint again in six months, as the call on OPEC falls further in 2020. But it will be harder to do so because, ceteris paribus, oil prices will be higher, and some of the current overcompliance will be gone, and some undercompliance will have set in. That does not bode well for agreeing to another extension. This will eventually put downward pressure on prices, even with the distillate demand requirements that accompany the IMO.

The End-Use Consumption Picture is Bleak

Each month, new final (or close to final) data for 2018 oil demand becomes available and reinforces our view that global oil demand had a hard landing last year. Falling naphtha and fuel oil demand, lower direct burn of crude in Saudi Arabia and weak gasoline and diesel demand growth led to annual growth in global consumption of just less than 600,000 b/d with another 120,000 of strategic stocking (remember US SPR stocks fell even as Chinese stocks continued growing), yielding total growth of roughly 700,000 b/d in 2018. This is an impressive deceleration from 2017’s 1.6 million b/d of growth. Demand continues to be weak with our projections for 2019 growth at about 800,000 b/d of consumption and another 200,000 b/d of strategic stocking for a grand total of 1.0 million b/d. For the sake of comparison, the IEA has 2018 and 2019 growth still at 1.2 million b/d. 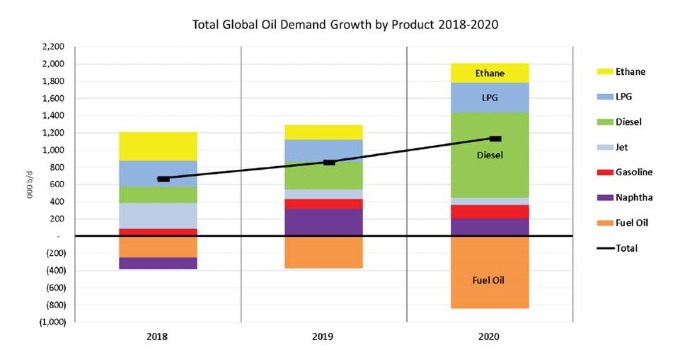 One of the key differences between ESAI Energy and the IEA is how we handle Chinese demand in 2018. The IEA relies primarily on total apparent demand. That means the tremendous growth in Chinese crude oil imports at the end of the year are measured as consumption in the IEA’s “other” category. In our numbers we tally consumption by product. That approach yields a much lower total products demand growth based on gasoline, lpg, naphtha, jet kero, diesel, fuel oil, bunker and ethane consumption. The imported crude that has not been run in refineries cannot all be counted as “other” demand. Some can be counted as strategic stocking demand, but some also went into the operating inventories of the Chinese oil industry. Operating inventories have had to go up as China has added refining capacity (i.e. if you hold 14 days of inventory at your refinery and the refinery’s capacity goes up by 200,000 b/d, then you must hold an additional 2.8 million barrels of operating inventory). That is a permanent change in inventory-holding. That crude will not be refined (if is it must be replaced quickly), so it does not serve as a measure of underlying consumption.

What Has Happened in China?

China’s economic slowdown has been largely self-induced, but exacerbated by the trade disputes with the U.S. Credit expansion since the 2008 financial crisis had led to a surging debt-to-GDP ratio of over 250 percent in 2017, prompting Beijing to tighten regulations to lower dangerous debt levels. The private sector, which represents two-thirds of the country’s GDP and provides over 80 percent of employment, was hit particularly hard by this mandated credit crunch, because of the financial system’s preferential treatment to state-owned firms. Moreover, the country’s alarming pollution had forced Beijing to take increasingly strict environmental policies, which disrupted activities of polluting industries and reduced trucking. The trade war, meanwhile, has further weighed on consumer confidence and investment.

As a result, the Chinese economy experienced its slowest growth in nearly three decades in 2018. Sales of passenger vehicles declined for the first time in 28 years in 2018, by nearly 4 percent, and slid further by another 13 percent this year through May. The PMI index in May declined to 49.4, suggesting continued contraction, despite several rounds of fiscal stimulus. Electricity production, consumer goods sales and highway trucking all grew much slower than in previous years.

For the crude producing heavy hitters, the Saudis, Kuwait, the UAE, Iraq and Russia, this dramatic deceleration in oil demand has coincided with the re-imposition of sanctions on Iran and new sanctions on Venezuela. Production from both countries will fall by almost 2.0 million b/d on average in 2019 over 2018. This has saved crude oil prices. They have slid on the back of macroeconomic concerns related to the US China trade dispute. But, if not for Venezuela and Iran, crude prices would be far lower. At the same time, these countries have cut output or foregone production increases. They will have to continue this policy next week in order to manage the expectations given decidedly bearish market sentiment.

Rewarded in the Short-term

Extending the current production cut has become a no-brainer for two reasons. First, if they do not, oil prices will fall in response. Second, under the current deal, Saudi, Kuwait and UAE can still raise production and not be out of compliance. In the meantime, the absence of Venezuelan and Iranian crude exports will become noticeable as demand rises seasonally. Crude oil prices will rise in the months ahead to pull in replacement crude. Moreover, the worlds’ refiners will need to make more distillate at the end of the year, supporting crude demand.

Punished in the Medium-term

But next year, even with oil demand recovering to our current estimate of 1.5 million b/d (including strategic stocking), and with slightly decelerating shale growth, the call on OPEC crude will still fall. In short, demand will not recover enough, even with the distillate-oriented demand of the IMO. Absent new sanctions on another producer, the OPEC+ countries should consider renewing their pledges again, or they will face lower prices later in 2020.
Source: ESAI Energy