OPEC pumped its fewest barrels in more than five years in July, aided by a huge production decline in its largest producer, Saudi Arabia, along withfalls in Iran, Nigeria, Libya and Venezuela.

The producer bloc saw output slide to 29.88 million b/d last month, a fall of 210,000 b/d from June, despite output gains by six of its members, an S&P Global Platts survey of industry officials, analysts and shipping data found.

Compliance with production quotas rebounded in July, mainly because Saudi Arabia pumped way below its quota, making up for undercompliance by Iraq, the second-largest oil producer in OPEC, and Nigeria.

However, OPEC’s efforts to rebalance the market are moving sluggishly on tepid demand growth amid concerns of a weakening global economy.

Crude oil prices have fallen by more than 5% since early-July when OPEC and its 10 non-OPEC allies, led by Russia, extended their 1.2 million b/d production cut agreement through March 2020.

This comes even as OPEC’s production has fallen by a whopping 2.55 million b/d since December, when it agreed to implement the second round of its production cut deal.

SAUDI’S SUMMER SLUMP
Saudi Arabia saw its production fall by 150,000 b/d to 9.70 million b/d as exports to almost all its key customers dropped, along with a reduction of the kingdom’s refinery runs.

This is the lowest the kingdom has produced for the month of July in almost a decade. Traditionally, production tends to increase in summer due to arise in direct crude burn amid soaring temperatures.

Saudi oil minister Khalid al-Falih continued to assure the market that the kingdom will keep its production and exports below 10 million b/d and 7 million b/d respectively in August.

Iran’s production dropped further as its exports have nosedived in the past year thwarted by stringent US sanctions.

The sanctions-hit country saw its output fall by 50,000 b/d to 2.30 million b/d in July, its lowest level since September 1988. Iran has now resorted to filling a growing flotilla of tankers with its crude and condensate as floating storage.

PERSISTENT OUTAGES
Production in countries that are exempt from the output cuts also fell, pushing OPEC production to its lowest since April 2014, when it pumped 29.72million b/d.

Venezuela’s crude output fell 30,000 b/d to 730,000 b/d as production in the Orinoco belt was affected by problems with the country’s electric powergrid. The Latin American oil producer remains afflicted by blackouts, leaving the entire country, including oil installations, without power.

Production levels have stabilized between 720,000 b/d and 760,000 b/d in the past few months. Venezuela has however seen its output halve over the past year, with its spiraling economic crisis exacerbated by US sanctions that began in January. In May, it produced 720,000 b/d, its lowest since a nationwide strike debilitated its oil industry in January 2003. 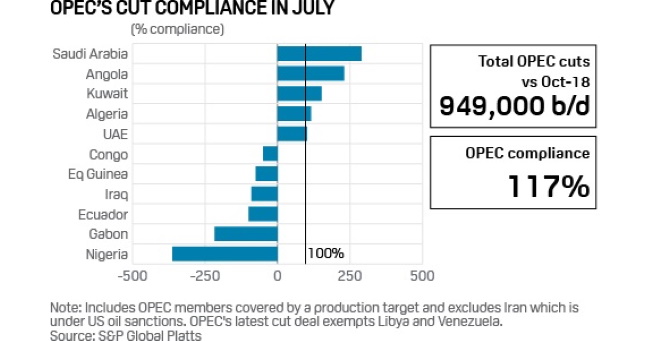 Libya produced 1.05 million b/d in July, a fall of 40,000 b/d from the previous month. The country’s largest field, Sharara, was closed briefly mid-month due to a valve closure. Sharara was again shut-in on July 30 for similar reasons, showing how much at risk Libyan oil production is amid a deteriorating security environment as the country remains embroiled in a protracted civil war.

The overall production drop was offset by small gains in Angola, Ecuador, Algeria, Equatorial Guinea, Iraq and the UAE.

The rise was due to higher crude exports from its southern terminals, though these were slightly offset by a fall in loadings from the semi-autonomous Kurdistan region. But production has fallen since May, when it pumped a record high of 4.82 million b/d.

This supply accord, which started in January 2019, exempts Iran, Libya and Venezuela.

The nine-country OPEC/non-OPEC monitoring committee is set to meet September 12 on the sidelines of the World Energy Congress in Abu Dhabi to assesscompliance and oil market conditions.

OPEC set the date of its next meeting for December 5 and will meet with its non-OPEC allies the following day.

The S&P Global Platts OPEC survey, which has been published since 1988, measures well-head crude oil production in each member country.
Source: Platts