OPEC sees the oil market as well supplied and is wary of creating a glut next year, the group’s secretary-general said on Thursday, suggesting producers are in no rush to expand a June agreement that raises output.

Oil prices have rallied this year on expectations that U.S. sanctions on Iran will strain supplies by lowering shipments from OPEC’s third-largest oil producer. Brent crude LCOc1 last week reached $86.74, the highest since 2014.

OPEC Secretary-General Mohammad Barkindo, speaking at the Oil & Money conference in London, said there were many non-fundamental factors influencing the oil market that were beyond oil producers’ control.

“The market has been reacting to perceptions of a possible supply shortage. The market remains well supplied,” he told a briefing.

“The projections for 2019 clearly show a possible rebuild of stocks,” he said of the supply and demand balance for next year.

OPEC separately updated its oil supply and demand forecasts on Thursday, cutting demand estimates for next year due to economic challenges such as trade disputes and volatile emerging markets, and pointing to excess supply.

One of the factors boosting prices, according to analysts and some members of the Organization of the Petroleum Exporting Countries, has been the decision by U.S. President Donald Trump to reimpose sanctions on Iran.

Trump has demanded that OPEC cool prices by pumping more oil. Barkindo, asked whether Trump’s criticism of OPEC was unfair, said: “The market is currently being largely driven by decisions taken elsewhere – outside OPEC, outside non-OPEC.”

OPEC and allied producers – not including the United States – agreed in June to return to 100 percent compliance with output cuts that began in January 2017, after months of underproduction in Venezuela and elsewhere pushed adherence above 160 percent.

OPEC’s report said its own production rose by 132,000 barrels per day in September to 32.76 million bpd, the highest this year, although producers have yet to increase supply enough to reach 100 percent compliance.

Barkindo, responding to a question whether producers needed to go beyond full delivery of the agreement, said they were taking it step by step.

“We have to continue to assess to see how and when we will achieve the 100 percent conformity and how the market would respond, hoping that some of these non-fundamental factors will evaporate by then,” he said.

“We remain faithful to what we agreed in June.”

2019 HEADWINDS
OPEC and its allies hold their next meeting in December to decide policy for next year.

In the report released on Thursday, OPEC cut the estimate for demand in 2019 for its own crude to 31.8 million bpd because of weaker demand and rising supplies outside the group.

Should OPEC keep pumping at September’s rate, the report points to an excess supply of almost 1 million bpd in 2019 – although this is before any sizeable reduction takes place in Iranian output.

Iran pumped 3.45 million bpd in September, according to figures in OPEC’s report on Thursday, down 150,000 bpd from August. Production dropped below 2.7 million bpd under previous sanctions that were lifted following the 2015 nuclear deal. 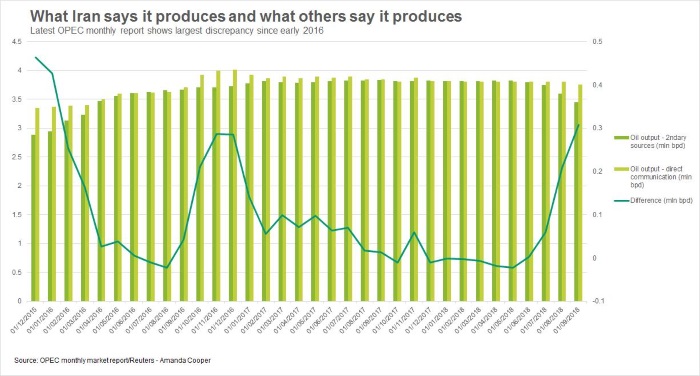 Barkindo said oil producers were worried about their levels of spare output capacity, which reduces their ability to make up for sudden supply shortages, amid a reduction in energy-industry investment.

“We are very concerned,” Barkindo said when asked about spare capacity, citing a continued decline in oil industry investment resulting from a market downturn that began in 2014.

Saudi Arabia, the de facto leader of OPEC, is the only oil producer with significant spare capacity on hand to supply the market if needed.