This is an initiative of the Ambassador and General Consul of Panama in Greece, H.E. Mrs. Julie Lymberopulos, as both Panama and Greece celebrate this year the 200 years of their independence.
The art exhibition consists of works by Panamanian painter, Olga Sinclair, as well as of nine renowned Greek artists: Io Angeli, Giorgos Avgeros, Apostol, Chrysa Vergi, Anna Gerolymatou, Irini Kana, Christos Kechagioglou, Vangelis Renas, Manolis Charos, who created works in honor of Panama through their own vision and conception.

During the event, the Philharmonic Orchestra of the Municipality of Piraeus entertained the attendees.

The Deputy Minister of Education, Mr. Angelos Syrigos, among others noted:
“Usually, when we talk about the Greek Revolution and say that it is a unique event, we refer to the European continent. We miss the fact that at about the same time a number of countries in Latin and South America gained their independence. One of these states is Panama. Congratulations for this exhibition”. 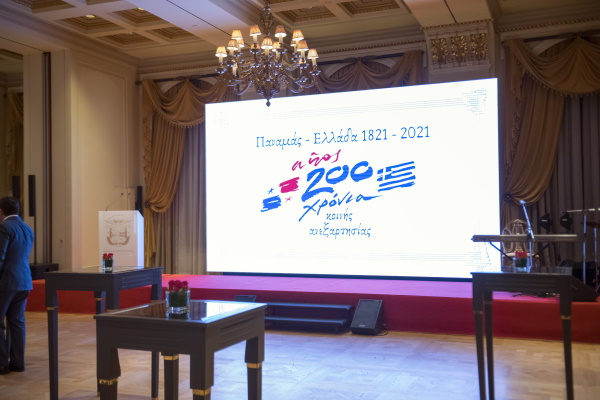 Source: Embassy and General Consulate of Panama in Greece

The Ambassador and General Consul of Panama in Greece, Mrs. Julie Lymberopulos, mentioned in her speech:
“I feel deeply moved by the fact that the anniversary year of 2021 both Panama and Greece commemorate their 200 years of liberation from Spain and the Ottoman Empire, respectively…

…Representing the country where I was born, Panama, in the country where my parents were born and raised, Greece, the accomplishment of this anniversary action has a special value to me.
Οur art exhibition is an anniversary of remembrance, tribute and pride for all those who gave their lives to ensure the independence of their country…
…The synergy and close cooperation of the Embassy and Consulate General of Panama in Greece with the Municipality of Piraeus is an important seal of the twinning agreement signed in July 2021 between the City of Piraeus and the City of Panama.
The Municipal Gallery of Piraeus houses this valuable effort and gives a step to the art works for this sacred anniversary purpose…

The Mayor of Piraeus, Mr. Yannis Moralis, stressed:
“I welcome you to the historic building of the Municipal Art Gallery, where, in the context of the twinning with the city of Panama, we inaugurate the art exhibition “Elogiando la Libertad” – “Hymning Freedom” – “Panama – Greece 1821-2021: 200 years of common independence”.
This is a remarkable initiative of the Panamanian Ambassador in Greece, Mrs. Lymberopulos, and the works of art are excellent.
We are connected in many ways: the long-standing friendship between Greece and Panama, the twinning of the cities of Panama and Piraeus, the fact that it is the only Embassy based in the Municipality of Piraeus, and the 200 years of common independence.
As I have said before, it is important that twinning does not stop at signatures, but that we move on to the implementation of joint actions in terms of culture, history, sport, development, environment, and so on.
We are already talking about visiting Panama City in 2022 and showing the Greeks and Panamanians that we can do important things. I would like to congratulate the participants and all those who contributed to the excellent organization of the art exhibition.”

The Authorized Municipal Councilor of Culture of Municipality of Piraeus, Ms. Irene Daifas, among others, pointed out:
“Because art, in all its possible manifestations, is a key way of expressing human feelings and ideas, the sealing of the recent twinning and at the same time the 200 years of independence of Greece and Panama is displayed with all its dynamics through the art exhibition.
I am sure that the exhibition will be a good trip and will mark as a beacon, new interactions of cultures, collaborations and actions “.

The Secretary General for Greeks Abroad and Public Diplomacy of the Ministry of Foreign Affairs, Mr. Giannis Chrysoulakis, among others, stated:
“I express my special joy and emotion for the fact that I am among you, on the occasion of such a special event, the opening of which coincides with the celebrations for the completion of 200 years since November 28, 1821, when Panama declared independence from Spain “.

The Inauguration of the Art Exhibition “Elogiando La Libertad” was a bright event. Many Ambassadors, members of Diplomatic Missions, esteemed Politicians, Journalists and well respected Artists attended the ceremony and had the opportunity to enjoy the exceptional art works.

Visiting the exhibition is free.

It is worth mentioning that a digitized version of the exhibition has been created, which allows this great endeavor to travel around the world, overcoming any obstacle or limit posed by a physical exhibition, especially in times of pandemic, by following the link www.elogiandolalibertad.com

Reception
Following the successful inauguration of the Art Exhibition “Elogiando la Libertad” – “Hymning Freedom” – “Panama – Greece 1821-2021: 200 years of common independence” took place on Tuesday 16th of November at the Piraeus Municipal Gallery, the Embassy and General Consulate of Panama in Greece celebrated the National Day of Panama by offering a bright Reception in the Grand Ballroom of the Grande Bretagne Hotel on Thursday, November 18th, 2021.

The event attended mainly Ambassadors, Church representatives, esteemed Politicians and Shipping executives. The concept of the event was the special Bicentennial Anniversary of the Liberation of Panama from Spain. The Ambassador and General Consul of Panama in Greece, H.E. Mrs. Julie Lymberopulos offered a warm welcome to the esteemed guests and expressed a celebratory greeting honouring Panama.
Within the offered Reception, it was announced that the Embassy and General Consulate of Panama in Greece proceeded to a successful strategic synergy with the SQLearn Company that undertook the creation of the digitized virtual version of the exhibition, which allowed this great endeavor to travel around the world, overcoming any obstacle or limitation imposed by the physical version, especially in the times of pandemic.

At the reception, the video of the virtual tour of the exhibition was shown consecutively on large giant screens, so that the guests had the opportunity to enjoy the unique art works on a spectacular night.
The artists who accepted the creative invitation of the Embassy of Panama and participated in this exhibition, honored the event with their presence and were very excited about the promotion of their artworks.

In addition to an exceptional celebratory video created by the Panamanian Ministry of Culture for this special anniversary, the guests also enjoyed a unique anniversary video which was created with the initiative of the Embassy of Panama in Greece.
The Philharmonic Orchestra of the Municipality of Piraeus, responded to the call of the Embassy, and played the National Anthem of Panama on the Main Stage of the emblematic building of the Municipal Theater of Piraeus. The result of the creative video that was first shown during the event was remarkable.
Finally, it was great that the event was attended by 15 Panamanian Students who are currently in Greece because they study in the Webster University is a special students exchange program.
Source: Embassy and General Consulate of Panama in Greece