In this current period of downturn, critics of offshore shipowners will say that owners have been guilty of not scrapping older tonnage in order to maintain a young and advanced fleet. Though this is justified, rewind to pre-downturn, these debt free older vessels were able to get work on a fairly regular basis, and were a cashflow generator for owners.

The abrupt way in which the offshore party ended in 2014/15 meant that due to their aforementioned earning power, owners have many now idle old OSVs on their books. No one knew the downturn would be so severe, but analysts and market commenters were quick to point to the high number of these older vessels as one of the principle problems with the overall market. 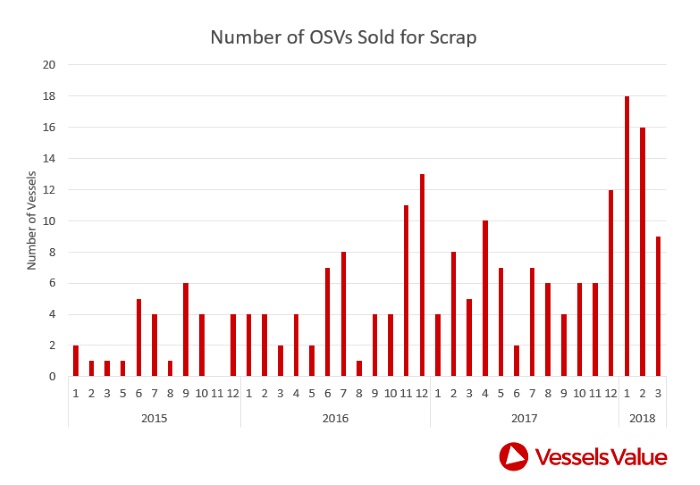 During the first years of the downturn (2015-2016), owners resisted the calls to scrap, no doubt thinking of how these vessels were solid earners in previous years.

However, as the severity of the downturn increased and the likelihood of these older vessels returning to work began to diminish, owners have slowly come round to the importance of scrapping these vessels. So far in 2018, 43 OSV vessels have been sold for scrap. In the first three months of 2017 only 17 vessels were sold. This increase shows owners are biting the bullet and realising that if they are to survive these poor market conditions, they need to think of the future market rather than the market of the past.

Despite the low scrap value of old OSVs, owners are putting faith in the restructuring process and emerging a leaner entity on the other side. A prime example of this being Tidewater, who are unsurprisingly top of the scrapping leaderboard selling 13 vessels for scrap in 2018.
Source: VesselsValue

Previous: Shipping in an era of digital transformation: Structural shift in shipping – opportunities through digital networking
Next: Ship Owners Take A Breather From New Ship Acquisitions