The Panama Canal’s Administrator and the CFO offered perspectives on regional growth opportunities during recent IFC and Bloomberg events.

Earlier this month, the Panama Canal’s Administrator and the Chief Financial Officer were invited to speak at events organized by the International Finance Corporation (IFC) and Bloomberg. Both discussions offered a glimpse of the Canal’s outlook on opportunities for the Latin American region and the importance of investing in sustainable, inclusive growth.

On May 18 and 19, global leaders gathered in Panama for Bloomberg’s New Economy Gateway, a two-day conference that explored growth opportunities in Latin America. Panama Canal Administrator Ricaurte Vásquez Morales served as a panelist to discuss “Supercharging Supply Chains,” alongside other leaders from the logistics industry.

In addition to highlighting Panama’s important role as an established trade and logistics hub, Administrator Vásquez underscored sustainability as the key to future growth in the region.

“Overall, demand is moving closer to the need of more sustainable products,” said Administrator Vásquez during his panel. “We have not only an opportunity to invest in order to reduce our carbon footprint, but also an opportunity to price our service with that market—a new emerging market for the world and the region.”

The Administrator emphasized that growth also comes with a responsibility to the environment and local populations. “One of the elements that has demonized the fight of globalization is who was left behind. And making sure that everyone is carried on to the next level is important,” said Administrator Vásquez. “That lack of isolation is critical in order to become a part of the greater flow of trade and services.”

Prior to the panel, Administrator Vásquez appeared on Bloomberg TV to speak about his economic outlook, given the ongoing impacts of supply chain disruptions on global trade. Despite these challenges, the Administrator shared a positive view for the Canal and its long-term growth. 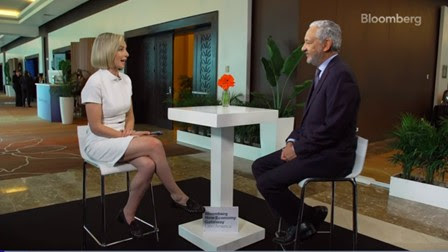 “There are three major elements that we are looking at: carbon neutrality, water resources and high technology in order to accommodate more vessels into the existing infrastructure,” Administrator Vásquez said. “That will require some additional investments which may look non-traditional to the Panama Canal, but I think this is the next stage we have to follow in order to remain competitive.”

The Canal is no stranger to pursuing bold, ambitious, long-term goals, as it did with the Panama Canal Expansion Program, which was inaugurated in 2016. And much like the process of financing the Expanded Canal, reaching carbon neutrality will be a colossal undertaking—one that will require organizations to put not only sustainability, but also resiliency at the core of their operations.

Víctor Vial, chief financial officer of the Panama Canal, recently spoke at the IFC Sustainability Exchange, a virtual event series focused on “Sustainable Finance for Climate & Social Impact.” Mr. Vial underscored the need for investment in water management, technology, infrastructure and optimizing operations, and the importance of cross-sector collaboration in uncovering and accelerating innovative solutions to the global challenge of climate change.

“It won’t be easy, but it’s well worth it, and we think we have to set the example,” said Mr. Vial. “We see that as a responsibility of the Canal, given its role in the industry, to incentivize our customers to do everything they can to make the investments necessary to meet this [environmental] challenge.”

The Canal, like many other operations around the world, faces key challenges in adapting infrastructure, communities, businesses and people to the inevitable impacts of climate change. The development of sustainable financial tools can incentivize customers, stakeholders, international organizations and governments to integrate sustainability into economic development. 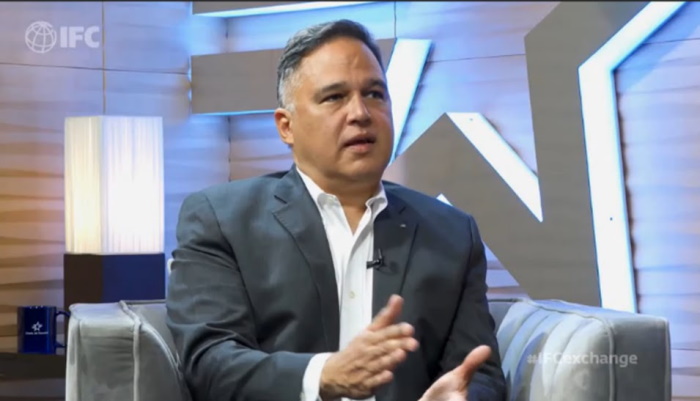 As the Canal pushes for more green programs, like expanded reforestation and sustainable agriculture programs, as well as more energy-efficient operations, it will require support from its partners.

“We don’t feel it’s fair that someone who has made significant investments in their fleet to be carbon efficient should pay the same as someone who has made no investment,” said Mr. Vial. “We want to make sure that our pricing strategy reflects that, and that sustainability is part of our decision-making process.”

Progress Toward Decarbonization and Water Resilience

These convenings of global leaders and the increasing calls for climate action reaffirm the Panama Canal’s continued advocacy for more sustainable supply chains. The Canal understands that its survival and responsibilities can no longer be separated from sustainable and climate-resilient investments.

The Canal is already intrinsically a sustainable organization—last year, it saved the world 16 million tons of CO2 emissions by operating a reliable and safe shortcut for vessels. However, the Canal is also working to make its own operations as low-carbon and resilient as possible.

This month, the Canal was awarded with the ‘Las 50 Primeras’ seal by the Ministry of the Environment (Mi Ambiente) for its early leadership in driving the decarbonization of the waterway. Since the Canal announced its carbon neutral goal last year, it has developed actionable targets to reduce emissions across its own operations and those of its customers. It also recently started a pilot program to invest in hybrid tugs and electrical vehicles, reducing the emissions of its transportation fleet. The waterway is sourcing additional methods of phasing out the use of fossil fuels and integrating clean energy projects, energy efficiency measures and conservation programs.

The Canal is also committed to advancing solutions for water availability, building a robust water management system to make its operations resilient to declining precipitation and rising temperatures in the watershed. As a result of its recent water conservation and monitoring actions, the Canal was able to suspend a draft restriction for the Neopanamax Locks, retaining a 50’ draft, the highest level possible at the waterway.

Over the course of the past year, the Canal has solidified its vision for sustainability and has taken action to implement holistic sustainable solutions to make its environmental goals a reality. Through sustainable finance mechanisms, green transit incentives, technological investments and industry partnerships, the waterway will continue to elevate its contributions and solidify its role as a leading green corridor for global trade.
Source: Panama Canal Authority (ACP)