Australian coal exports are on the rise this year, with China and South Korea proving to be the preferred markets so far. In its latest weekly report, shipbroker Banchero Costa said that “coal trade in the Pacific basin has been generally positive so far this year, and this has benefitted not only Indonesian exporters but also Australia, although to a slightly smaller extent. In the first 9 months of 2019, based on Refinitiv vessel tracking data, Australia exported 290.6 mln tonnes of coal (including both metallurgical and thermal). This was +3.5 percent year-on-year, i.e. 9.8 mln tonnes more than in the same period last year. As such, Australia has now fallen marginally behind Indonesia, whose coal exports jumped by 8.5 percent to 291.8 mln tonnes in the first three quarter of this year”. 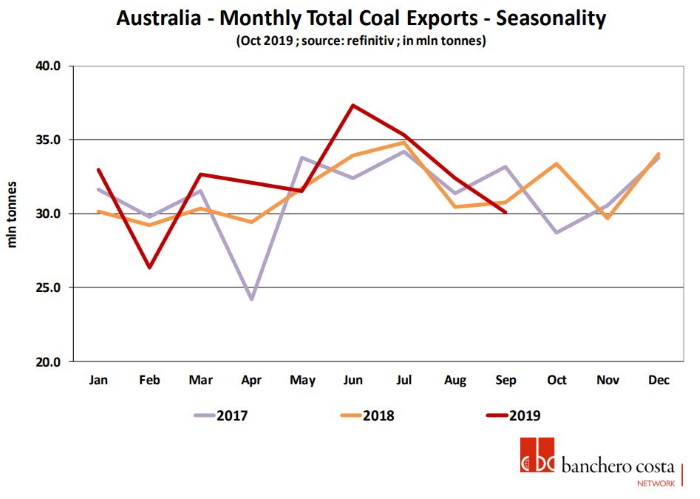 According to the shipbroker, “the usual seasonality patterns have been even more exacerbated this year. Australia’s monthly export of coal fluctuated from the 26.3 mln tonnes in February 2019 to the 37.3 mln tonnes in June 2019. As such, the second quarter of the year proved particularly strong, recording a growth in volumes of +6% year-on-year, whilst in the third quarter volume growth cooled somewhat to +1.9 percent year-on-year. The destinations of these cargoes didn’t change dramatically, although some shifts were observed. Shipments from Australia to China and South Korea kept growing this year, whilst volumes to Japan and India declined. In the first 9 months of 2019, Australia sent 66.6 mln tonnes of coal to Mainland China, +3.3 percent year-on-year”. 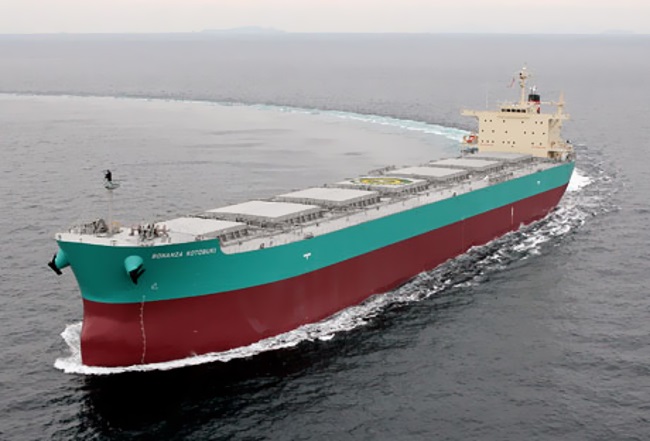 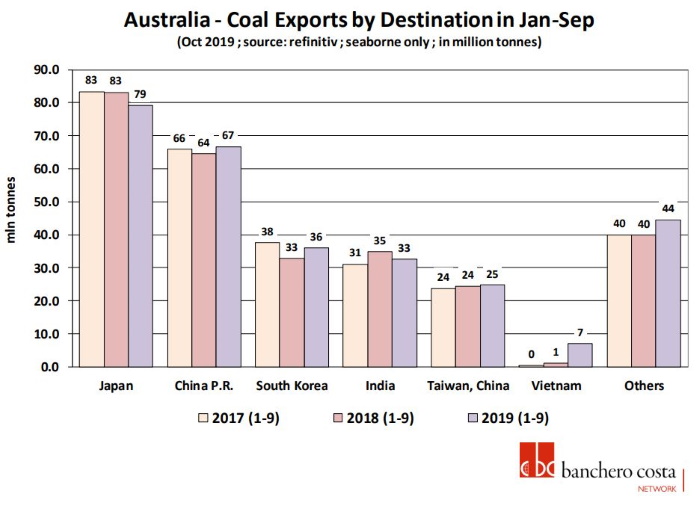 “On the other hand, volumes to Japan and India declined so far this year. In the first 9 months of 2019, Australia sent 79.2 mln tonnes of coal to Japan, down -4.7 percent year-on-year. Japan remains the top destination for Australian coal, and was the destination of 27.20 percent of Australia’s coal shipments this year. In the same period, 32.6 mln tonnes of coal were shipped from Australia to India, down -6.4 percent year-on-year. India was the destination of 11.2 percent of Australia’s coal exports. Australia lost market share in India to Indonesian competition, despite stronger overall Indian coal demand. So far this year, Australian was the source of just 21 percent of India’s coal imports, against Indonesia’s 43 percent share. Of the total coal volumes exported so far this year by Australia, about 38 percent were shipped on Capesize or Newcastlemax vessels, about 7 percent on Post-Panamax or Minicape units, 46 percent on Panamax vessels, and less than 10 percent on Supramax or Handymax vessels”, the shipbroker concluded.
Nikos Roussanoglou, Hellenic Shipping News Worldwide