Hydraulic fracturing operations in the Permian shattered old records in June, according to Rystad Energy.

The prolific shale basin in Texas and parts of New Mexico in the US has reached new heights in terms of the number of fracked wells – both on a daily basis and in terms of absolute monthly wells.

Rystad Energy estimates there were as many as 18 wells fracked per day across the entire Permian Basin, or almost 550 wells during the month of June. Previously, fracking in the Permian peaked at approximately 520 wells fracked in August 2018, while the peak daily rate was reached in February earlier this year.

“The Midland platform has undoubtedly been the driver of this upwards trend with consistent month-over-month increases,” says Oleksii Shulzhuk, senior analyst on Rystad Energy’s shale team. “According to our latest estimate, fracked wells totaled 339 in June 2019, constituting a whopping 70% growth since the first quarter of 2019, when an average of 200 wells were fracked per month.” 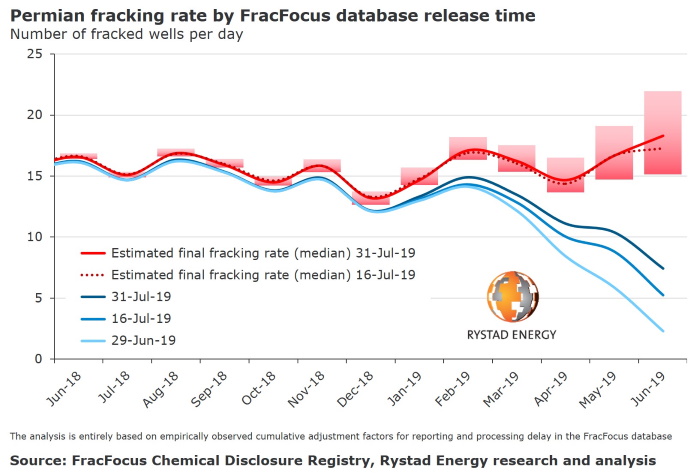 Looking at the US as a whole, fracking operations across the nation saw a strong recovery in June 2019 with 49 wells fracked per day, up by five daily wells since May 2019.

“This puts fracking in June just one daily well short of reaching the all-time high rate that was achieved in August 2018, when 50 wells were fracked across the US,” Shulzhuk added. 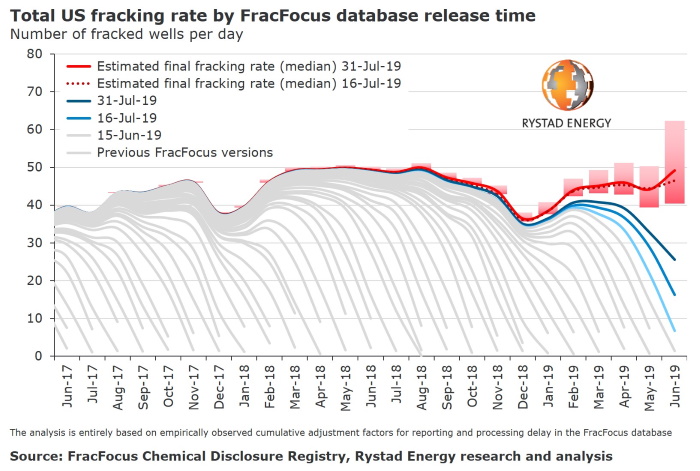 Rystad Energy is able to confirm this relatively recent upward trend after dissecting the latest data from the FracFocus Chemical Disclosure Registry, to which operators report their wells and fracking activity.

Average fracking activity in the US was rather flat over the spring months, with just a single well per day increase in both March and April 2019, followed by a decline of two wells per day in May. The tides turned in June with an increase of five wells per day across all major shale-producing regions in the US. This surge was supported especially by the “Big Three” oil plays (Permian, Eagle Ford and Bakken) and the SCOOP/STACK play in Oklahoma.

“This latest batch of fracking activity confirms our belief that prospects look promising for US shale production in the second half of the year. Going forward we might still experience some positive surprises from fracking activity as we observe cases of back-loaded activity this year for selected players. However, we must also recognize that the high numbers achieved in June could turn out to be the peak fracking rate for all of 2019,” Shulzhuk remarked.

US shale production has seen continuous growth since reaching a low point in 2016, and is expected to keep growing in the medium term, albeit at a slower rate. By the end of 2019, light oil supply in the US is forecasted to reach 9 million barrels per day (bpd), according to Rystad Energy. The Permian Basin will be the key contributor to oil production growth going forward.
Source: Rystad Energy