Permian Basin producers are breathing a collective sigh of relief after developers of the three newest intrastate gas transport pipelines recently announced a series of respective brownfield expansions that promise to lengthen the runway for oil and gas production growth in West Texas.

On May 16, Kinder Morgan was the most recent to declare the start of an open season for an expansion, this time on its Gulf Coast Express Pipeline, which will run through June 6. Upon reaching a final investment decision, the project would expand the pipeline system’s 2 Bcf/d capacity by about 570 MMcf/d, or by almost 30%, according to a company press release.

Kinder Morgan is targeting a December 2023 in-service date for the project, which would mostly involve compression expansions on the pipeline system to boost deliveries from the Permian to the South Texas market.

The open season announcement for Gulf Coast Express comes just days after the developer wrapped up an earlier open season for a separate brownfield expansion on its 2.1 Bcf/d Permian Highway Pipeline, which has promised expand the pipe’s capacity by some 650 MMcf/d, or by more than 30%.

The two brownfield expansions, initially floated by Kinder Morgan during its first-quarter 2022 earnings call on April 20, were subsequently joined by a third expansion project – announced earlier this month when developer MPLX declared FID on its own 500 MMcf/d brownfield expansion to the consortium’s 2 Bcf/d Whistler Pipeline.

Combined, the more than 1.7 Bcf/d in additional capacity could allow Permian gas production to reach 20 – 20.5 Bcf/d, which according to S&P Global Commodity Insights, could occur as soon as late 2025. 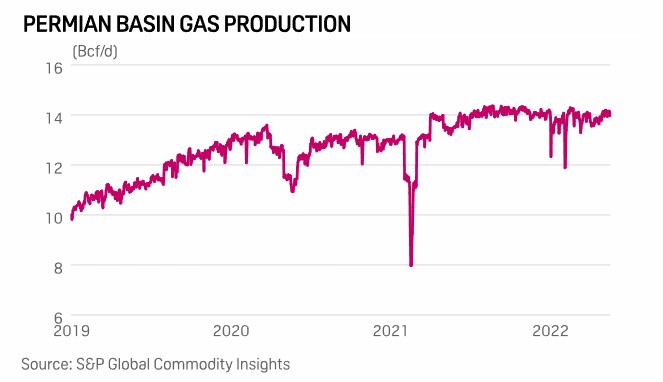 Next month, Permian crude production is expected to hit a record-high 5.2 million b/d, according to recent data published by the US Energy Information Administration. Assuming no additional crude transport pipelines are added, Permian oil production could grow comfortably until the mid-2020s, and potentially beyond, current projections from S&P Global show.

For Permian producers then, the brownfield pipeline expansions proposed by Kinder Morgan and MPLX temporarily resolve the midstream gas constraints problem, effectively kicking the can down the road and allowing crude production to continue growing. 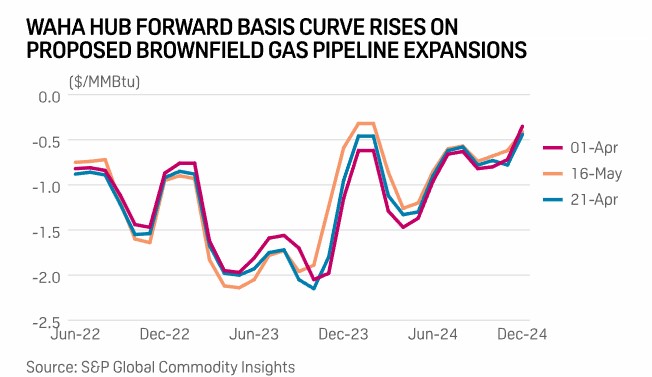 Based on existing production-takeaway capacity for gas, the Permian Basin would likely outstrip it’s roughly 17 Bcf/d of gas pipeline capacity, and about 900 MMcf/d in local demand, by early 2024 according to S&P Global projections.

Based on prior experience with midstream constraints, the gas market had already begun pricing in steeper basis discounts at Waha for late 2023 and early 2024.

Just six weeks ago, prior to the announcement of the brownfield capacity expansions on Permian Highway, GCX and Whistler Pipeline, even peak-winter contracts at Waha were pricing at more-than-60 cents below the Henry Hub. Following the recent expansion announcements, those discounts have been nearly halved to about 30 cent below the benchmark, Platts M2MS forwards data shows.
Source: Platts