Peter Thomson, the United Nations Secretary-General’s Special Envoy for the Ocean, visited the headquarters of the Economic Commission for Latin America and the Caribbean (ECLAC) today in Santiago, Chile, where he met with the regional organization’s Executive Secretary, Alicia Bárcena, and spoke with journalists.

At the press conference, Thomson expressed appreciation for Chile’s efforts to protect and conserve the ocean and encouraged the country to continue playing a leadership role in this area at the two major international events that will take place towards the end of the year in that country: the 25th Conference of the Parties to the United Nations Framework Convention on Climate Change (COP25) and the APEC Leaders Summit (the Asia-Pacific Economic Cooperation Forum). 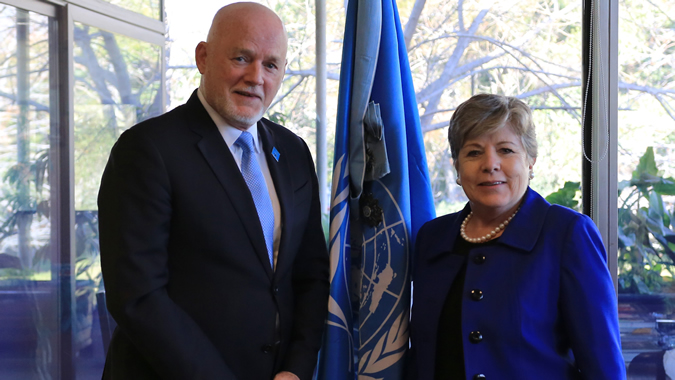 “Chile won a great victory already on the climate change work by announcing the name of the ‘Blue COP’” Thomson stated, indicating that this decision not only served to raise the visibility of the ocean’s importance in the fight against climate change, but it also underlined the fact that this phenomenon involves the entire cryosphere. Thomson, in the context of his visit to Chile this week, met with Chilean President Sebastián Piñera and the Minister of the Environment, Carolina Schmidt, as well as other national authorities.

With regard to the APEC Summit, Thomson stressed that “Chile is bringing to the table the issue of illegal, unreported and unregulated fishing (IUU),” which must be eradicated by 2020 according to the 2030 Agenda’s Sustainable Development Goal (SDG) 14. “The most effective thing APEC could do would be to say: ‘we can stop illegal fishing in the Pacific’”, the UN Ambassador sustained.

The United Nations’ Special Envoy for the Ocean, a native of Fiji, also praised Chile and Argentina’s proposal to declare a part of the Antarctic peninsula a Marine Protected Area, in line with target 5 of SDG 14, which seeks to conserve at least 10% of coastal and marine areas by 2020.

Also during the press conference, Alicia Bárcena indicated that “for Chile in particular, COP25 is an opportunity, but also a major challenge, because the world is at a crossroads. Today we can make the decision to continue producing oil or to embrace renewable energy. We can articulate economic investments, orienting them towards an environmental big push.”

“The underlying issue is where we want to invest in the future to make this change possible, because today’s investments will have a very significant impact for the rest of the century. That is why the call that Ambassador Thomson is making, and that Chile is making, is so relevant. We have to start today, there are decisions to be made, decisions by society and by central economic actors,” Bárcena emphasized.

ECLAC’s Executive Secretary added that “the challenge we face, which is urgent and unavoidable, is to see how capable we are of incorporating innovation into our patterns of consumption and production, based on the recognition that current patterns are no longer viable.”

Thomson called for accelerating efforts against climate change due to the discouraging news coming out of the scientific realm. He stressed the power of innovation and the need to share knowledge and capacities on a global level. “We are talking about the need for humanity to make radical changes to our consumption and production patterns. That’s the world which we are now in. We are not in normal times anymore. And that’s why those steps that Chile has been taken are so important,” he said.

Peter Thomson was designated Special Envoy for the Ocean in September 2017 by the current Secretary-General of the United Nations, António Guterres, with the objective of promoting and providing follow-up to the efforts agreed upon at the UN Ocean Conference held in June of that same year.

The next Ocean Conference will take place on June 2-6, 2020 in Lisbon, Portugal, with the theme of “Scaling up ocean action based on science and innovation for the implementation of Sustainable Development Goal 14: stocktaking, partnerships and solutions.”

Ambassador Thomson has served as Fiji’s permanent representative to the United Nations and President of the 71st session of the global forum’s General Assembly.

Currently, he is also a member of the High Level Panel for a Sustainable Ocean Economy and Friends of Ocean Action.
Source: ECLAC