Electrification of transport, industry and residential heating will leave the petrochemicals sector as the main consumer of crude oil by 2050, capturing 55% of demand for the fossil fuel, the International Energy Agency (IEA) said on Wednesday.

The Paris-based body said in its World Energy Outlook (WEO) 2021 that the use of crude oil as a feedstock for the petrochemicals sector is to grow under all its potential scenarios for the global energy mix.

The rise would come from “large increases” in crude consumption in the petrochemicals industry in the Middle East, China and India.

The IEA’s three scenarios includes the Net Zero Emissions (NZE) scenario by 2050, the most desirable as the world tries to contain global warming to a 1.5°C increase by 2100, compared with pre-industrial levels.

The Announced Pledges Scenario (APS) takes into account countries’ pledges to comply with the 2015 Paris Agreement, while the Stated Policies Scenario (STEPS) looks at those pledges but how they lack detail on how to be implemented.

Crude oil, together with natural gas and coal, are fossil fuels that emit greenhouse gases (GHGs), which are causing global warming.

While recycling rates for plastics and other petrochemical-derived products are predicted to grow under the three scenarios, the use of petrochemicals also increases as emerging economies urbanise and their hunger for consumer products rises.

“The petrochemical sector was the only segment that saw an increase in oil use in 2020. An increasing number of countries have recently announced or introduced policies to scale up recycling and limit single-use plastics, and investment in waste management and recycling featured in a number of stimulus packages,” said the IEA.

“Measures to ensure that pledges are achieved include regulatory action to tackle plastic use and the development of an international secondary waste market. However, the absence of significant efforts to boost recycling in countries without net zero pledges means that recycling rates globally only rise to 23% and oil demand increases by just over 2m bbl/day to 2030.”

The IEA said that under the NZE scenario, the global average recycling rate would rise to 27% in 2030, with “some use” of bio-based petrochemical feedstocks, although these would compete for sustainable feedstock with other sectors.

All in all, only around 5% of total plastics feedstock in the NZE in 2030 is sourced from bioenergy; oil demand therefore would increase even in this scenario, up by 1.5m bbl/day to 2030.

“Oil demand, for the first time, shows an eventual decline in all scenarios in this WEO, although the timing and sharpness of the drop vary widely,” said the IEA.

“[In the STEPS scenario], oil use in road transport increases by around 6m bbl/day through to 2030, with a particularly sharp rise in 2021, and it increases by close to 8m bbl/day in aviation, shipping and petrochemicals.”

Under that scenario, crude oil demand would peak at 104m bbl/day by the mid-2030s; global crude demand last peaked in 2019 before the COVID-19 pandemic hit, at nearly 100m bbl/day.

“By 2030, 60% of all passenger cars sold globally are electric [in the NZE scenario] and no new [internal combustion engine] passenger cars are sold anywhere after 2035. Oil use as a petrochemical feedstock is the only area to see an increase in demand; in 2050, 55% of all oil consumed globally is for petrochemicals.” 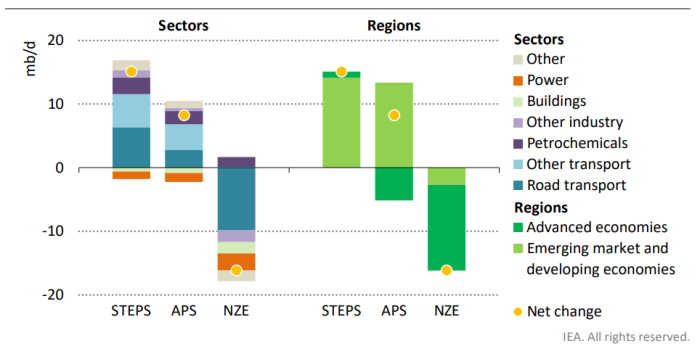 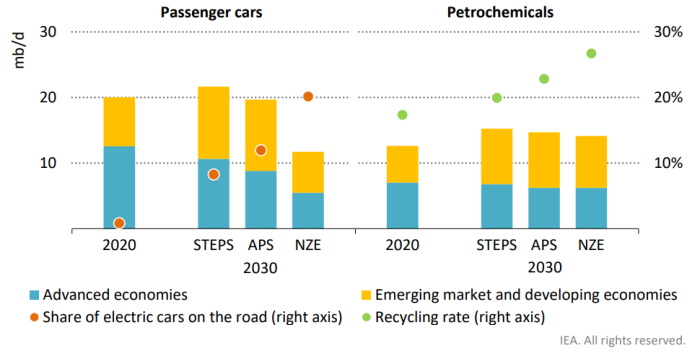 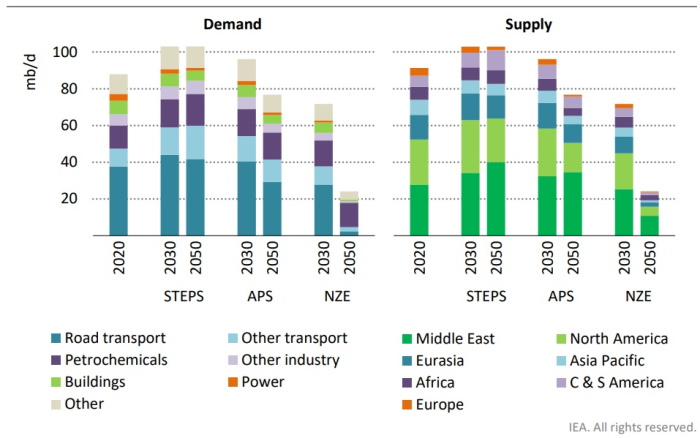 MABUX: No firm trend on Global bunker market on Dec. 06