At the end of the second quarter of 2018, Philly Shipyard was building two containerships under contract with Matson (Hulls 029-030). Hull 029 (named Daniel K. Inouye) was christened at a ceremony at the Philly Shipyard on 30 June 2018. When delivered, this vessel will be the largest containership ever built in the United States. Hull 029 production activities continue to progress in the Commissioning Dock and sea trials are expected to occur next month. Hull 030 production activities continue to progress in the Building Dock. The planned delivery dates for Hulls 029 and 030 remain Q3 2018 and Q1 2019, respectively. While Philly Shipyard continues to actively seek the new orders and capital necessary to build vessels after Hull 030, it continues to adjust its operations and workforce in line with its current order backlog. These adjustments include idling additional parts of its facilities and laying off some more of its employees. Since the beginning of 2018, Philly Shipyard has laid off approximately 25% of its employees in a series of layoffs.

Shipping Investments
During Q2 2018, Philly Tankers, a Jones Act shipping company that is majority-owned by Philly Shipyard, held an Extraordinary General Meeting whereby it was decided to commence an orderly liquidation process. Philly Tankers is proceeding with this process for the purpose of distributing its available cash balances to shareholders in 2018. To date, the dividends paid by Philly Tankers to its shareholders total USD 78.1 million, and Philly Shipyard’s share of those dividends totals USD 41.9 million. Philly Tankers will not make any further dividend payments before liquidation other than any dividends necessary to cover U.S. tax withholding payments on behalf of its non-U.S. shareholders due at an earlier time. 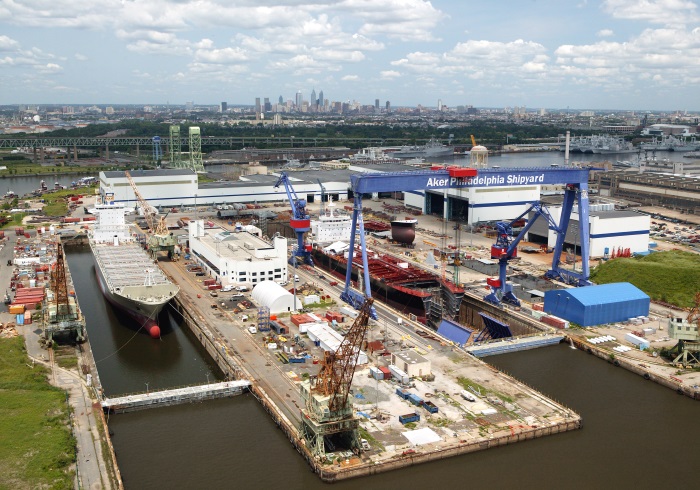 As previously disclosed, under International Financial Reporting Standards (IFRS), 100% of the revenue, cost and profit on each of Hulls 025-028 was deferred, and the deferred amounts for each of these vessels were recognized at delivery, as if Philly Shipyard was originally building these vessels for its own account. This accounting treatment was required for the Philly Tankers vessels (i.e., Hulls 025-028) because there were no external customers at the time these contracts were signed and shipbuilding activities commenced. Since none of these vessels was delivered during Q2 2017, this project did not contribute to Q2 2017 operating revenues and other income, even though there was continued progress on Hulls 027 and 028 in that period.

In addition to the IFRS financial measures reported above, EBITDA1 and Adjusted EBITDA2 are considered other relevant earnings indicators for Philly Shipyard as they measure the operational performance of the shipyard. In particular, Philly Shipyard believes presenting Adjusted EBITDA is useful to investors as it provides another measure of Philly Shipyard’s profitability from its operations, as if Philly Shipyard never had any shipping investments, and more closely represents earnings from shipbuilding activities.

The operating revenues in first half of 2018 were impacted by the implementation of the new IFRS 15 standard (IFRS 15). The 2017 accumulated revenue has been adjusted according to IFRS 15 with an increase of USD 38.4 million as of 31 December 2017. This had an impact on the revenue in Q1 2018 leading to a reduction in revenue of USD 38.4 million compared to a revenue recognition as the difference between accumulated revenue as of 31 March 2018 and 31 December 2017 as presented in the annual report for 2017. See notes 4 and 11 for further details.

Financing
The Company has a secured five-year term loan for up to USD 60.0 million from PIDC Regional Center, LP XXXI through the Welcome Fund loan program. The loan matures in March 2020. The entire USD 60.0 million amount was drawn under this facility as of 30 June 2018. The Company also has an unsecured three-year revolving credit facility for up to USD 10.0 million from TD Bank, N.A. The facility terminates in April 2019. USD 1.2 million of this facility was utilized as of 30 June 2018 for the issuance of letters of credit.

Shareholder Distributions
Due to the current main focus on securing new orders beyond Hull 030, the PHLY Board has decided not to pay any further ordinary or extraordinary dividends at this time. The PHLY Board will revisit the Company’s dividend policy and dividend plan when it has more clarity about the Company’s new order situation and related capital requirements.

Outlook
Shipbuilding
The contract with Matson (Hulls 029-030) provides for shipbuilding activity with delivery dates through Q1 2019. As of 30 June 2018, Philly Shipyard had an order backlog of USD 65.2 million. The key focus area for Philly Shipyard’s operations continues to be the completion and delivery of the Matson vessels. Philly Shipyard expects it will recognize revenues in 2018 only for the continued progress on the Matson project (Hulls 029-030) and potentially some initial progress on contracts for new vessel construction projects, if and when secured. Philly Shipyard currently forecasts the Matson vessels to be a loss-making project. Further, Philly Shipyard expects that the combined margin in 2018 from the Matson project and any other possible project will be insufficient to cover S,G&A and overhead costs not allocated to those same projects.

Securing contracts for new vessels is the key to Philly Shipyard’s long-term future and ultimate return to sustained profitability, but will not materially improve its near-term forecast. Due to the under-recovery of the costs mentioned above, Philly Shipyard expects it will suffer significant losses in 2018 and 2019, even if the shipyard receives orders for new vessels. The current forecast is also subject to sensitivity due to the potential for operational inefficiencies arising from the timing of new vessel orders and other unforeseen impacts.

Until earlier this year, Philly Shipyard had been working on a project to build up to four containerships (CV3700 vessels) for delivery to TOTE in 2020 and 2021. However, in January 2018, this project was placed on hold. Philly Shipyard still intends to resume the CV3700 project, if conditions permit. However, there can be no assurance this project will resume. If this project is cancelled, then Philly Shipyard must write-off the work-inprocess for this project, totaling USD 16.6 million. The total cost of a potential cancellation is estimated to be less than USD 20.0 million, of which around 90% of the cash impact has already been factored into the Q2 2018 financials. Philly Shipyard continues to explore alternatives in order to secure contracts and financing for these containerships.

In addition, Philly Shipyard is in active discussions related to several potential new construction projects for other types of Jones Act vessels. In particular, on 16 July 2018, Philly Shipyard signed a non-binding Term Sheet with an undisclosed potential buyer for the construction and sale of two new, state-of-the-art, costeffective and eco-friendly 50,000 DWT class product tankers for operation in the Jones Act trade with targeted deliveries in Q4 2020 and Q1 2021. If built, these vessels will be substantially similar to the recently completed series of eight MT-50 class product tankers delivered by Philly Shipyard, except the main engines will be upgraded from Tier II to Tier III compliant. The transaction is subject to agreement by the parties on definitive documentation and fulfillment of certain closing conditions, including, but not limited to, securing commitments for charters. The Term Sheet provides for a period of exclusivity to negotiate and complete the transaction. In order to support the delivery timetable, Philly Shipyard has initiated preliminary design work for the vessels. However, there can be no assurance that Philly Shipyard will obtain contracts or financing for this project or any other project. Furthermore, none of these possible projects alone will fully cover the estimated under-recovered overhead costs (i.e., overhead costs not allocated to projects) due to the lack of work.

In the near term, Philly Shipyard is expanding its search for new opportunities throughout the marine industry, including various specialized vessels such as fishing trawlers and cable layers, as well as vessels to support the growing offshore wind industry. Philly Shipyard is also exploring potential partnerships that can create a stronger entity to secure new work into the shipyard and create value for the Company and its shareholders. In the longer term, Philly Shipyard is seeking to diversify its business beyond the traditional vessels it has built for the commercial market. In order to be able to maintain continuous shipbuilding activities, Philly Shipyard is pursuing opportunities to expand its base for operations also into new long-term projects for non-commercial end users.

Among other endeavors, Philly Shipyard has teamed with Fincantieri Marine Group and Vard Marine to compete for the detail design and construction (DD&C) of the U.S. Coast Guard’s next generation heavy polar icebreaker. In support of this effort, the team is participating in a government funded industry study to develop a baseline icebreaker design, cost estimate, and project schedule and refine key vessel features and performance requirements. The final request for proposal (RFP) was issued in Q1 2018, with bids due in Q4 2018 and award of the contract for DD&C expected in Q3 2019.