The Chinese ban on coal imports from Australia has shaken up coal trades in the east. In the absence of Australian coal exports to China, other exporters have been scrambling to fulfil China’s coal demand. As a result, some countries are lacking their usual coal imports, a gap which Australia on the other hand is trying to fill.

For the first time in many years, South Africa started exporting coal to China in December 2020. Since then, exports have averaged 760,000 tonnes a month, about a sixth of total South African coal exports in that period. On the other hand, exports to India and Pakistan, which together took almost 70% of South African seaborne coal exports in 2020. Exports to the two countries have fallen by 44.5% in the first two months of the year to 5.6m tonnes. 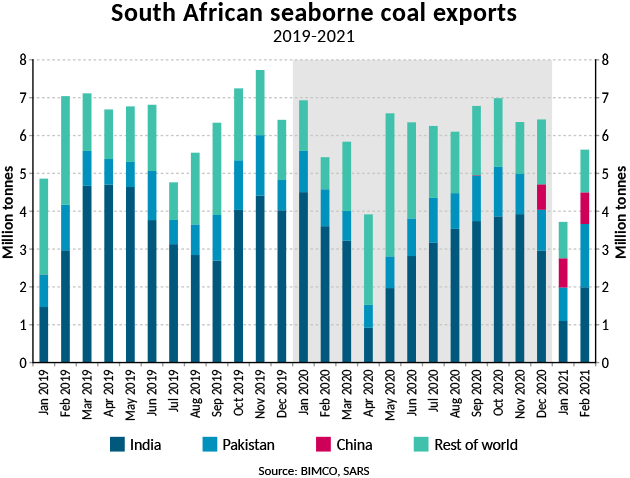 Overall, total seaborne South African coal exports have fallen by 24.3% in the first two months of the year compared to the start of 2020, with exports totalling 9.3 million tonnes, down from 12.4m last year. The drop in volumes has seen the number of ships catering to South African coal.

exports fall from 160 in the first two months of 2020 to 104 in the same months of this year. Just under half of exports this year have been carried by Supramax ships (51), in addition to 27 Capesize and 23 Panamax ships. The last three ships were Handysize, according to Oceanbolt.

Indonesian exporters have also increased focus on China. The country’s exports to China have risen significantly while exports to the rest of the world has fallen, in particular to India. The drop in Indian imports from South Africa and Indonesia has been compensated for by Australia.

“Shipowners have been fast to react to the changes in the coal trade, as importers and exporters have scrambled to find new buyers and new sources. This situation has been easier to manage than the last time there was a major shake-up in dry bulk trades, after China imposed tariffs on imports of US soya beans, when seasonality and ship positioning complicated matters,” says Peter Sand, BIMCO’s Chief Shipping Analyst. “In addition to South Africa and Indonesia, countries such as Russia and Mongolia are set to benefit from the Australian coal ban in China.”

The changes to South African and Indonesian coal exports are the flip side to the developments in Australia. Australia has managed to find new buyers for its coal, though not quite enough to make up for the shortfall in exports to China, while other major exporters have jumped in and diverted their cargoes towards China.

Total Australian coal imports fell by 3.6% in the first two months of this year compared to 2020. This drop is exclusively due to the 98.9% fall in exports to China which have dropped from 16.0m tonnes in January and February of 2020 to just 176,392 tonnes in the same period this year. On the other hand, China excluded, exports to every other country have risen by 29.5%. 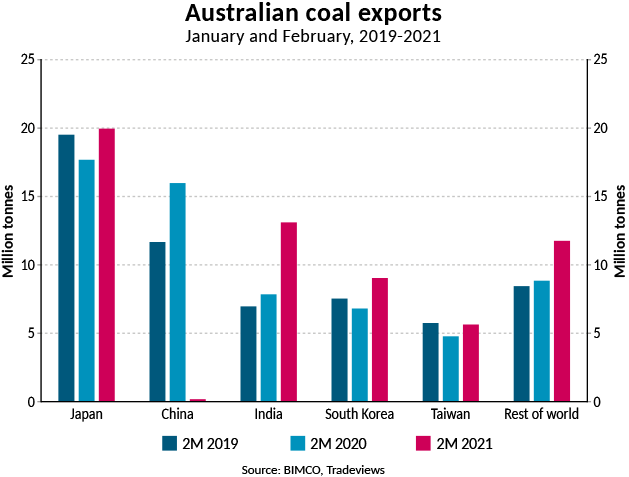 According to Chinese data, the country’s coal imports fell by 39.5% in the first two months of 2021 compared to 2020, a 26.8m tonnes drop. Imports from all major coal exporters, except Mongolia, are reportedly down so far this year. However, following a record high month in December 2020 when exports reached 39.5m tonnes, the three months period of December 2020 to March 2021 has seen growth of 13.4% compared to the same three months a year earlier, an increase of 9.5m tonnes.

“In this fast-moving environment with import restrictions disrupting established trades, it is important to follow data from both the exporting and importing countries, especially when the discrepancy between them is as big as it has been at the start of this year,” says Sand.

What does it mean for the all-important tonne mile demand?

While shipowners and operators have been quick to adapt to the changing trade patterns, the wider question of how the restrictions will affect shipping demand still needs addressing. Looking at China in isolation, the average sailing distance so far this year for a cargo from Indonesia is about half that of a cargo coming from Australia, while coal from South Africa sails 1.5 times longer.

Imports from Russia provide a tonne mile boost compared to Australia if they come from the Baltic of Black Seas. However, the vast majority of Russian seaborne coal exports to China are shipped from East Russia, lowering tonne mile demand. Any increase in imports from Mongolia is also bad news for shipping as they are all imported by land.

When looking at distances covered by Indian coal imports, distances sailed increase by respectively 1.9 or 1.5 times when Indonesia or South Africa replace Australian coal. Japanese and South Korean imports both see higher tonne miles generated by imports from South Africa compared to Australia, while tonne miles fall if the imports instead come from Indonesia.

“Seaborne coal has traditionally had the lowest average haul of the major dry bulk trades, and the changes currently happening are unlikely to change that, as some trades are replaced by longer hauls and other by shorter ones. It will be more important to see how demand for Chinese coal imports develops and how tensions between China and Australia unwinds in the future,” says Sand.
Source: BIMCO, Peter Sand, Chief Shipping Analyst