There was no report of abduction of crew in the Sulu-Celebes Seas and waters off Eastern Sabah, Malaysia in July 2020. However, the abduction of crew for ransom remains a serious concern as demonstrated by the Warning issued by the ReCAAP ISC on 2 July that five Abu Sayyaf Group (ASG) members were planning to conduct abduction of crew from ships passing by Tawi-Tawi and Sabah waters.

The ReCAAP ISC is also concerned about the continued occurrence of incidents on board ships while underway in the Singapore Strait. Three incidents were reported in July 2020. With these, a total of 19 incidents were reported in the Singapore Strait during January-July 2020 comprising 15 incidents occurred in the eastbound lane of the Traffic Separation Scheme (TSS), two incidents in the precautionary area, one incident in the westbound lane of the TSS and one incident just outside (south) of the TSS.

JULY 2020
NUMBER OF INCIDENTS
In July 2020, six incidents of piracy and armed robbery against ships were reported. Of the six incidents, five were actual incidents³ and one was an attempted incident⁴. All five actual incidents were incidents of armed robbery against ships, and the attempted incident was a piracy incident occurred in the South China Sea. All incidents have been
verified and reported to the ReCAAP ISC by ReCAAP Focal Points. Refer to the Appendix on pages 21-23 for the description of the incidents. 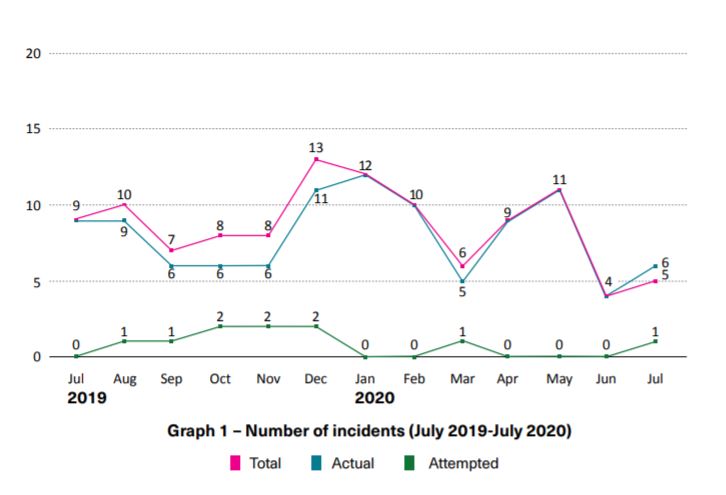 SIGNIFICANCE LEVEL OF INCIDENTS
Of the five actual incidents reported in July 2020, one was a CAT 3 incident and four were CAT 4 incidents.

The CAT 3 incident occurred on board an offshore supply vessel while anchored at a jetty at Kakinada, India. The duty crew sighted one perpetrator armed with a knife on board the ship. The perpetrator opened the generator door and tried to steal generator equipment using a spanner. The duty crew immediately reported the incident to the bridge. The
4 perpetrator jumped into the water and escaped after his presence was discovered. Nothing
was stolen and the crew was not injured.

Of the four CAT 4 incidents, three incidents occurred on board ships while underway in the Singapore Strait, and one incident occurred on board a container ship while anchored in the vicinity of Manila Bay Quarantine Anchorage Area South Harbour, Manila, Philippines.

Chart 1 shows the significance level of incidents reported in July of 2007-2020. 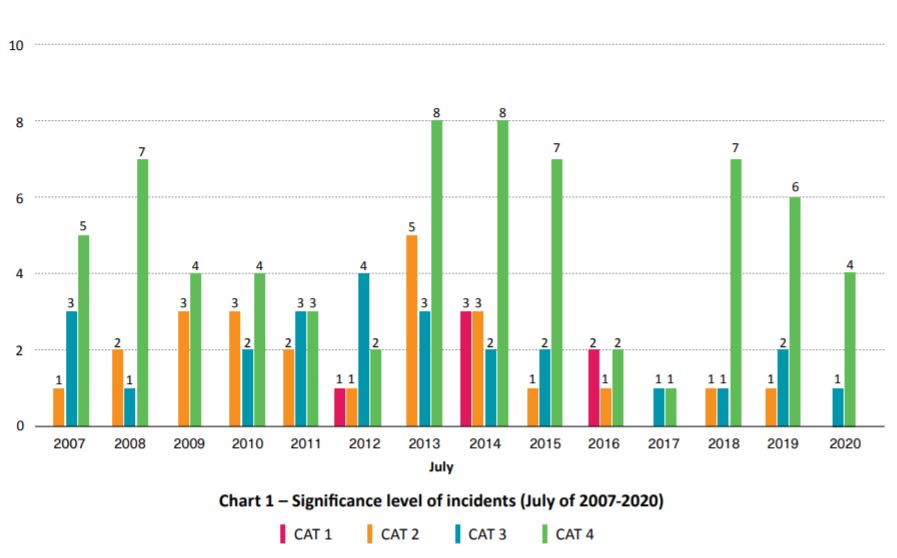