Despite the blustery winds, the bin to help save marine life pulled in the crowds at its unveiling on World Environment Day. The curiosity of visitors was piqued by the unusual sight of the 1.5 metres-high lifebuoy shaped bin.

The BinForGreenSeas was unveiled on Blackpool promenade by Cllr Fred Jackson, Cabinet Member for Environment, Transport and Climate Change for Blackpool Council and Fazilette Khan, Founder trustee of GreenSeas Trust.

The aim of the eye-catching rubbish bin is to motivate people to dispose of their litter in a responsible way. 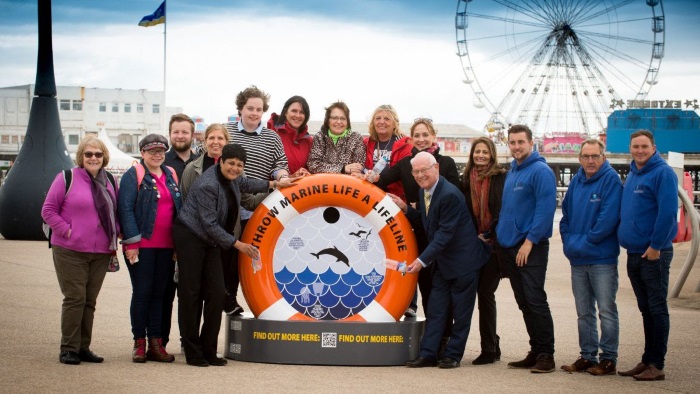 “Not many people realise that a major attributor of plastics at sea is careless littering. We want to help save marine life and fish stocks for future generations,” said Fazilette.

In the UK, 7.7 billion plastic water bottles are used annually. Each day, 700,000 are littered. GreenSeas Trust wants to open people’s eyes to the issue of marine plastics and change the ‘I can’t be bothered attitude.’ The charity hopes the unusual design of the bin, as well as the graphics and statistics it displays, will provide a visual trigger for beachgoers to dispose of their litter responsibly.

The QR code on the base, links to the GreenSeas Trust website, where helpful information is provided, including simple measures that can be taken to preserve the environment.
The BinForGreenSeas is made from fibreglass with 450 drinks bottles of recycled PET plastics as one of its key components. Not only is the bin changing human behaviour with its bold as brass shape and emotive message, but also, it diverts a lot of plastic from being incinerated or put in landfill.

Merchant navy officer, Fazilette Khan founded the charity in 2003, after witnessing the degradation of pristine environments as a result of non-biodegradable rubbish. She has since made it her mission to spread awareness that irresponsible littering has serious consequences for the oceans, marine life and human health.
“The BinForGreenSeas is a real eye-opener, both literally and figuratively,” said Fazilette. “The tagline ‘Throw Marine Life a Lifeline’ will act as a catalyst to associate using a bin with preserving marine life.”
Source: GreenSeas Trust