In late August, amid a sharp plunge in the Argentine peso, global suppliers to oil giant YPF received an unwelcome surprise in their inbox. A four-page notice that dollar contracts would be paid at a set exchange rate, far weaker than the market rate.

In the unsigned, undated document, obtained by Reuters, state-controlled YPF set the exchange rate at 45.19 pesos per dollar for 90 days, about a quarter below the current price, saying it faced an “unprecedented” challenge amid government fuel price caps and a brewing financial crisis.

The move rattled suppliers and global energy firms and will likely lead to a slowing of operations in the country’s huge Vaca Muerta shale play, where foreign companies were lured by promises of stability under business-friendly President Mauricio Macri.

Now they are getting worried. Macri was sorely beaten in a primary election last month by left-leaning Peronist rival Alberto Fernandez who is now the favorite to win a presidential election next month. The country is also grappling with newly-imposed capital controls and a mounting debt crisis.

“They talk about how Vaca Muerta is the goose that lays the golden egg. Well, the goose is over the chopping block right now,” a senior executive at an energy company that holds contracts with YPF who received the letter told Reuters.

Vaca Muerta, which covers an area about the size of Belgium in the rugged southern region of Patagonia, is thought to contain one of the world’s largest reserves of unconventional oil and gas. It remains largely untapped.

Martina Gallardo-Barreyro, an assistant vice president and analyst for Moody’s who specializes in the Latin America oil and gas sector, said a government fuel price freeze and the YPF’s subsequent currency change implied a definite slowdown for Vaca Muerta operations, though the full extent is still unknown.

“Projects that are on the limit of becoming not economically viable will be postponed. Projects will be postponed to keep cash. This is what happens. When you don’t have a clear view of what is going to happen in your revenues and the cost of funding, it’s very difficult circumstances,” she said.

“The fact that this is happening, it’s astonishing that we are talking about this,” Gallardo-Barreyro said.

Argentina needs foreign companies to help it explore and exploit Vaca Muerta, which is hopes will create a shale boom to rival that of the United States and lift the country out of seemingly endemic economic crises.

The executive, who declined to be named because of the sensitivity of the matter, said the currency maneuver by YPF would mean a loss of “millions and millions of dollars per month” for his company.

U.S. energy firms involved in Argentina including Exxon Mobil Corp and Halliburton are watching the economic and policy situation closely, though they did not comment directly on the exchange rate freeze or confirm whether they planned to cut back on business in Argentina.

Chevron Corp spokesman Ray Fohr said a “stable and predictable business environment is essential to draw investment capital on the scale that is needed to ensure growth and expansion for Vaca Muerta.” The company earlier this year laid out plans to drill between 60 and 70 wells in Vaca Muerta.

FINANCIAL TURMOIL
YPF’s move came after Argentina’s peso currency plunged sharply following the primary election defeat for Macri, who has been pushing to attract energy investment into the country.

In response, the government said it would hold down fuel prices to protect hard-hit consumers already grappling with a deep recession and inflation running above 50%.

Soon after, in the letter sent to overseas suppliers and partners, YPF said the “critical” situation was “totally unforeseen and alien”. The sharp peso fall and the government price freeze was raising the firm’s costs and hitting sales.

“This situation forces us to review the entire supply chain,” YPF said.

YPF, in a statement to Reuters, said the notice’s “sole purpose is to maintain financially sustainable operations” while the price freeze was in effect. The firm added that it had adjusted the agreed rate since to 46.69 pesos per dollar after Macri introduced currency controls to help stabilize the peso. On Friday, the peso closed at 56.15 to the dollar.

Fernandez, the strong favorite to win the Oct. 27 election, has given mixed signals about his intentions for Vaca Muerta, spooking some he could revert to interventionist policies of his running mate, ex-President Cristina Fernandez de Kirchner.

“There’s no point in having oil if in order to extract it you have to let multinationals come and take it away,” Fernandez said during a recent trip to Madrid.

In a television interview a few days later, Fernandez played down his comments, saying he had no issue with multinational firms, though it would be better for Argentina to develop its own technologies to extract its mineral wealth.

Fernandez also met with miners in late August, saying his team had been working on a plan to create a legal framework that provides certainty for investments in Vaca Muerta and the country’s lithium mining sector.

She has met with some of Fernandez’ advisers and was present at the meeting with mining companies in Buenos Aires last month.

“Despite some mixed signals, Alberto Fernandez and his advisors have made clear that private investment is essential to developing Argentina’s non-conventional reserves,” McKeague said. “And to bringing needed dollars into the economy.” 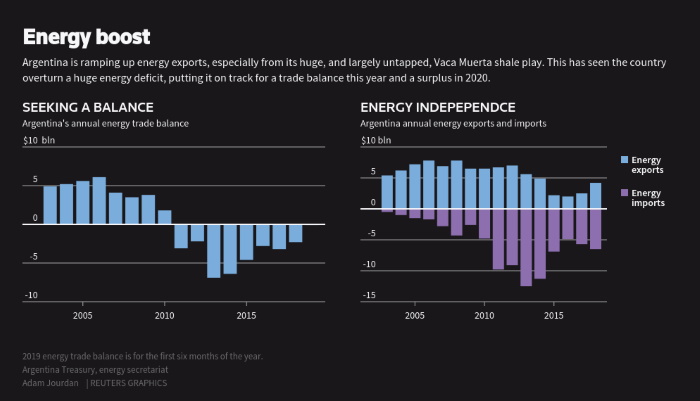