During the awarding ceremony that took place in the Green Port conference in Oslo, Norway, Director-General of the Port of Baku, Dr. Taleh Ziyadov noted that “For the Port of Baku, becoming an EcoPort embodies a genuine belief in a green and sustainable future. It is the tedious work in the last three years by the Port of Baku staff and its European partners that resulted in today’s recognition. Through its eco-conscious policies, the Port of Baku will continue to set an example to follow for other ports in the region.” 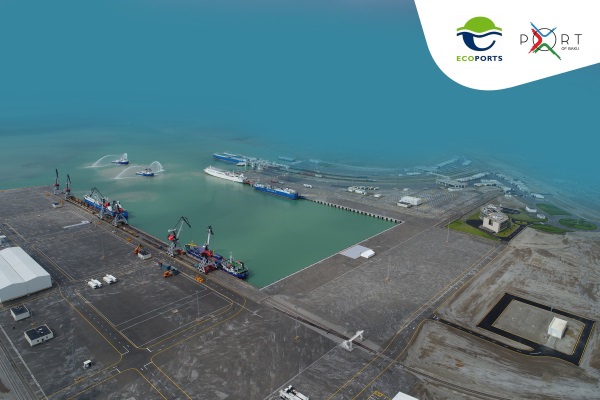 New Port of Baku in Alat settlement (70 km south of the capital Baku).

ESPO’s Secretary General Isabelle Ryckbost congratulated the Port of Baku for obtaining PERS certificate. “The relationship with the local community is of outmost importance for port authorities and EcoPorts contributes to further enhancing transparency and accountability of the port sector. EcoPorts’ environmental standard requires making port’s environmental policy publicly available and well communicated to the local community and the port stakeholders. With the certification of the Port of Baku, not only the port is breaking new ground, but also the EcoPorts network is now expanding further to the east,” said ESPO’s Secretary General.

There are 34 EcoPorts in Europe, including busiest ports such as Port of Rotterdam and Port of Barcelona. The Port of Baku has been working closely with the European Union in enhancing its operational efficacy, port management, environmental and risk management policies. It has already achieved ISO 9001: 2015, OHSAS 18001 and ISO 14001 certifications. It has also integrated UN Sustainable Development Goals (SDGs) in its business processes and operations.

Located at the strategic crossroads of Europe and Asia and nearby the sizeable markets like China, Turkey, Iran and Russia, the Port of Baku and its Free Zone is poised to become the leading logistics and trade hub in Eurasia. This is a part of a larger strategy of Azerbaijan to strengthen the country’s non-oil economy and diversify it away from hydrocarbons.
Source: Port of Baku

2019-10-18
hellenicshippingnews.
Previous: ESPO Congratulates Port Of Barcelona, Port Of Vigo And Port Of Baku For Getting Ecoports’ Environmental Standard (PERS)
Next: GCT a Leader in Container Terminal Innovation Joins TradeLens