The Port of Gdansk in Poland has staged a welcome ceremony for the inaugural visit of the first ‘Euro-China Train’ (ECT), as China’s modern-day silk road, the Belt and Road Initiative, reaches the Baltic.

The new ECT connection, known as ‘the Baltic Train’, is the result of cooperation between the Port of Gdansk Authority, DCT Gdansk container terminal and Adampol, which is the operator and administrator of the route. Adampol reports there is growing interest in the new service which slashes journey times from China to Gdansk from 40-45 days via sea to 10-12 days via rail. It said the Baltic Train will also ‘turbocharge’ delivery times for goods between China, Britain and Scandinavia to 12-14 days via feeder services from Gdansk cutting journey times via the Port of Hamburg to the same destinations by three to five days.

Port of Gdansk Authority Management Board President Lukasz Greinke heralded the train’s arrival from Xi’an in China as ‘a historic moment’ for the port and for Poland, as Gdansk seeks to cement its position as the ‘Gateway to the Baltic’ and the fastest growing port in Europe. He said introducing the ‘ECT’ connection to Gdansk would unleash trading opportunities between China and Poland and also Scandinavia and Britain via the feeder shipping services operating from Gdansk. 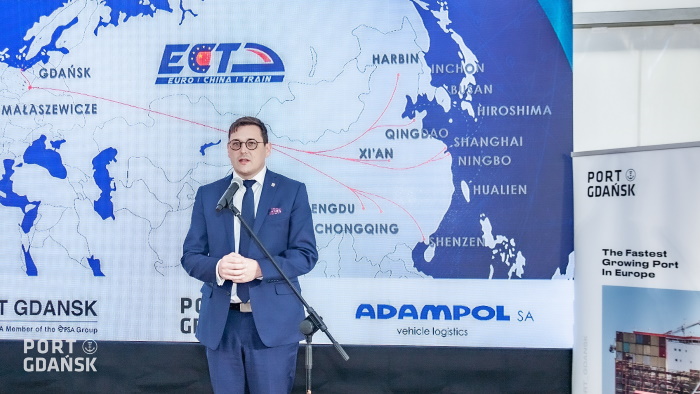 “The new rail connection from China directly to the Port of Gdansk is an alternative to Western European ports, which significantly reduces the time of container delivery to Scandinavia and Great Britain. We see this as a chance to use our highly developed connection network and infrastructure. Thanks to this solution, we are able to accelerate the transport of goods from China by up to five days. It also involves fewer operations on the container, which results in lower costs. From now on, the Port of Gdansk can offer a faster, better value and more competitive service.”

“The ECT-Gdansk rail link sends a very positive message about Poland’s infrastructure and readiness to do business to our Chinese partners. Accelerating journey times to the UK and Scandinavia by up to five days via Gdansk is an eye-catching development for Gdansk in China and the UK, Sweden and Norway. Until now the Port of Gdansk has been known for its ocean connections to China. The rail link opens up opportunities with in-land Chinese cities and logistics operations. Gdansk is in a great position to promote this new service having invested in China for a long time and committed to China through our Shanghai office. Moreover, Gdansk has extensive feeder links to a wide variety of European and Baltic ports. This provides a real alternative to congested German ports and will be offered in two directions via transport with shipper owned containers (SOC) and carrier owned containers (COC).”

“Since 2010 DCT Gdansk has been handling direct ocean calls from Asia enabling Poland to be connected to the world’s largest shipping trade-lane between Europe and Asia. It ensures that Polish goods can trade with Asia more efficiently. Today, we witness the launch of a regular rail connection between China and Gdansk and we are delighted to be the part of that service. This brings added value for the port with an extended range of possibilities for our clients. This is proof that sea and land transport can develop and coexist harmoniously, strengthening the position of the Port of Gdansk and DCT Terminal as the Northern Gate for the fastest growing region in Europe.”

The ECT-Gdansk rail link will be managed by Polish transport and logistics company Adampol, which operates a transshipment hub for up to 19-trains-a-day from China at its terminal in Malaszewicze on the Polish-Belarusian border accommodating trains from Xi’an, Chengdu, Chonqging, Hefei, Zhenghzou, Wuhan, Changsha and Harbin. Presently a train from the Adampol Terminal in Malaszewicze on the Poland-Belarus border can take three to five days to reach the Port of Hamburg while to Gdansk it takes between one and two days.

“Adampol has already had many years of experience in handling trains from China at its terminal on the Polish-Belarusian border.The connection between Adampol Malaszewicze land terminal and DCT Gdansk terminal opens up new possibilities of transport routes which will be competitive to existing routes such as China to Hamburg and Duisburg linked to the United Kingdom or Scandinavia. These routes can be replaced and as a result accelerated up to five days. Alternative transport routes, which this new train connection creates, will further strengthen the position of the port of Gdansk in Europe.” 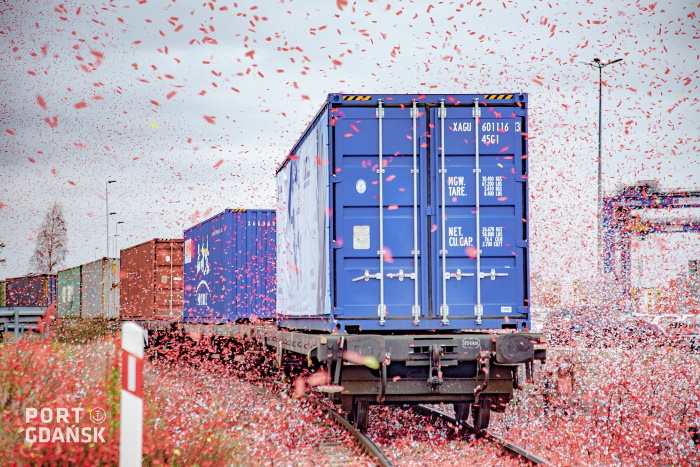 The Port of Gdansk said as well as being in talks with Chinese customers, the partners are also speaking with British, Scandinavian and Polish companies including car makers and timber producers as well as shipping lines and freight forwarding companies keen to exploit the benefits the new Gdansk Belt and Road rail connection. In addition, the Port of Gdansk’s Shanghai office is promoting the new rail link to in-land terminals in China which previously did not have a direct link to Gdansk and its hinterland and foreland of 120million. Previously ECT trains with cargo bound for Poland have travelled to Germany and Belgium only to send the cargo back to Poland or Belarus. The port said the new Baltic Train cuts that wasted time with a faster more efficient service.

“Many years of planning have gone into making this Belt and Road rail link happen,” he said. “This includes the complex modernisation of the Warsaw – Gdynia rail line, and the extension of the rail access from Gdansk city centre to the port. We have further launched an extensive modernisation programme of three cargo stations in the Port of Gdansk, which is expected to complete in 2023.” 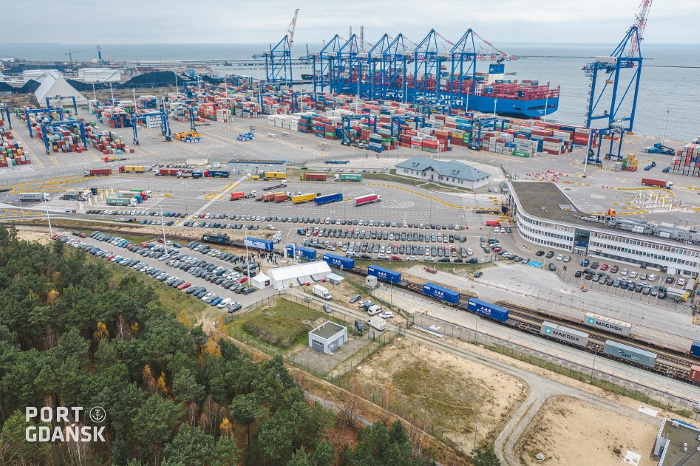 The next Baltic Train from China will arrive in Gdansk in December with a regular weekly service planned from January 2020. The new connection will also be used to transport goods into Belarus, enabling DCT and the Port of Gdansk to be the strategic port for Belarus, and Adampol to be the prime transshipment terminal for Poland and Belarus. Adampol’s intermodal terminal in Malaszewicze is the only one in Poland capable of the storing and transshipment of cars, as a result Adampol; sees huge potential for the automotive sector with this rail link as well as any type of goods suited to container transport. Adampol’s partners are the largest rail terminals and logistics companies in China which enables it to deliver and pick up goods and cargo through-out China.

The ECT-Baltic Train announcement follows a period of major growth from the Port of Gdansk. In October the port led a Polish delegation to Singapore outlining huge expansion plans designed to double its cargo volumes to 100m tonnes a year. This included showcasing investment opportunities in a new €2.8billion Central Port dubbed ‘the biggest maritime investment project in Europe’. The delegation marked 50-years of diplomatic ties between Poland and Singapore and followed the formal acquisition of DCT Gdansk, the largest container terminal in Poland, by PSA International, the Singapore based global ports group. in partnership with the Polish Development Fund and the IFM Global Infrastructure Fund. During the visit the PSA International, unveiled an ambition to grow TEU capacity to 7million-a-year from 2.2million in 2018. The Port of Gdansk grew by 20pc in 2018 with growth of 9pc 2019. The port is currently on target to exceed 50m tonnes of cargo for the first time, up from 40m in 2017. 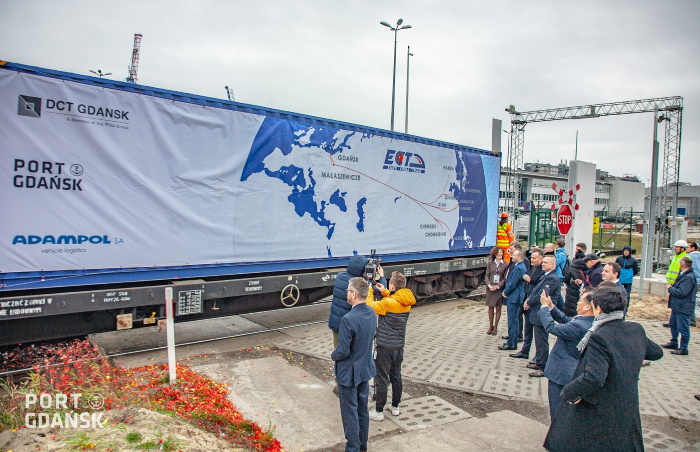 Proposals for the new Central Port include building 19 km of operational quays, 8.5 km of breakwaters and the building of nine terminals, four turning areas and three approach fairways. He said the terminals could be used for containers, passengers, offshore operations, LNG operations and shipbuilding.

The Singapore conference was told Poland is one of the most successful economies in Europe with an average growth rate of 4.2 per cent a year between 1992-2019 meaning it is now the seventh largest economy in the EU with a total GDP of €524 billion. This growth is supported by infrastructure investments, including €208billion in EU funding between 2007 and 2020, across the Polish hinterland.
Source: Port of Gdansk