In the first nine months of the year the maritime industry in the Port of Hamburg handled 91.8 million tons of seaborne cargo, a 4.3 percent drop on the previous year. Also down 7.4 percent at 27.5 million tons, handling of bulk cargo was especially hard hit. In comparison with the rest of Europe, container handling held up well. At 6.3 million TEU – 20-ft standard containers – for the Port of Hamburg the downturn was 2.7 percent. By contrast, conventional general cargo handling progressed especially well, with 1.1 million tons crossing the quay walls of Hamburg, 19.3 percent more than in the previous year.

Several developments simultaneously affected the Port of Hamburg cargo handling trend in the third quarter. “Causing long bottlenecks in ship traffic off Hamburg, among other ports, global supply chain disruptions were responsible for a fall in handling. In other European ports, the tendency had already become apparent in mid-year. Although we still performed well on a European comparison, in the third quarter global trends then hit the Port of Hamburg,” explained Axel Mattern, CEO of HHM – Port of Hamburg Marketing. Container handling in Rotterdam dwindled by 4.4 percent, while Antwerp-Zeebrugge handled 5 percent fewer containers.

Port of Hamburg seaborne cargo throughput in the first nine months of 2022
Compared to the first three quarters of the previous year, in 2022 general cargo slipped into deficit, achieving a 2.9 percent lower total of 64.4 million tons. Decisive here was a 3.2 percent downturn in containerized general cargo. By contrast, the 1.1 million tons total for its conventional counterpart reflected a distinct gain of 19.3 percent.

Container throughput in detail
A close look at the container handling segment reveals the identical effect on both exports at 3.1 million TEU and imports at 3.2 million TEU. Both were 2.7 percent down on the previous year’s level. Of boxes handled, those loaded remained in the lead. They were therefore the main cause of the overall downturn of 2.7 percent. Between January and September, 5.6 million loaded TEU, or 2.9 percent fewer, crossed the quay walls, whereas the empty box total of around 726,000 TEU was 1 percent lower. 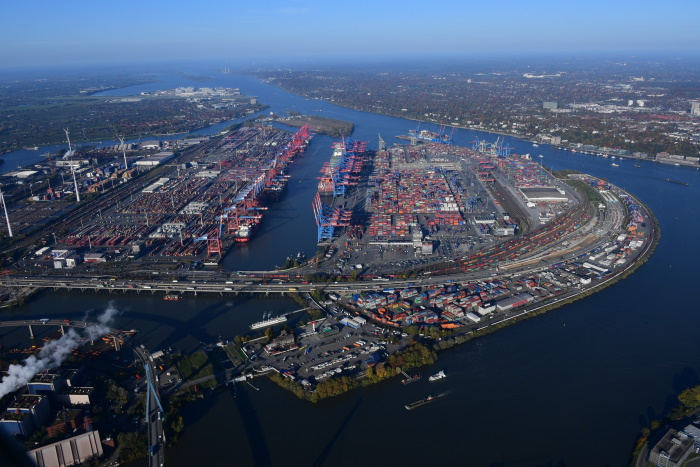 Hinterland services almost stable
The downturn in seaborne cargo handling also affected transhipment and continental handling. Down by 6.3 percent at 2.3 million TEU, transhipment throughput was mainly affected. By contrast, continental throughput was almost unchanged, falling by no more than 0.6 percent to 4 million TEU. The rail share of hinterland box transport therefore worked out at 50 percent.

More Megamax carriers arriving
In line with long-term trends, in the last nine months the number of containership arrivals in the Port of Hamburg fell. Altogether, there were 7.4 percent fewer than in the previous year. Yet against this trend, more Megamax vessels with capacities of between 18,000 and 24,000 TEU were to be seen in the Port of Hamburg. At 172, the total number of calls rose by 5.5 percent. “The further increase in Megamax carriers makes it clear that we truly needed the fairway adjustment. It is now up to the Federal government to tend and maintain this. Any fall in the new draft levels is counter-productive for the Port of Hamburg,” stressed Mattern.

Lower bulk cargo throughput
The bulk cargo terminals handled a total of 27.5 million tons between January and September, corresponding to a fall of 7.4 percent on the same period of the previous year. Liquid cargo was especially affected. While 7.3 million tons still crossed the quay walls, that represented a fall of 16.1 percent. Each down by 3.8 percent, the situation was more stable on grab and suction cargoes, the terminals handling 15.7 million and 4.5 million tons of these, respectively. 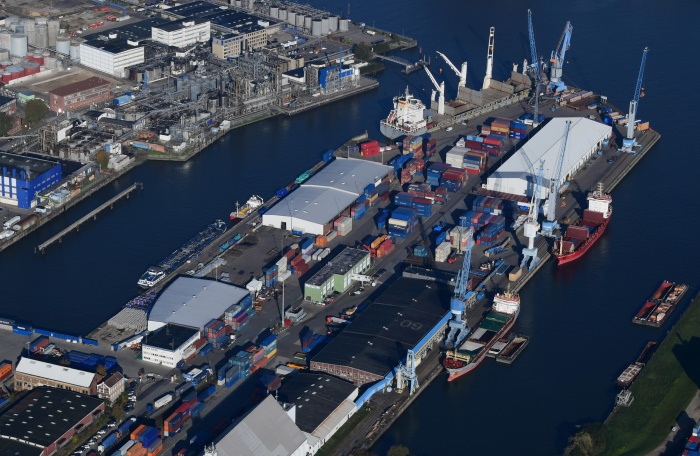 Poland with the largest gain
That fewer containers passed through the Port of Hamburg also hit volume trends in the various trades. Throughput in the East Asia trade, for instance, was 2.1 percent lower at 2.8 million TEU. The Baltic region suffered a striking downturn. “Here sanctions against Russia hit hard, although throughput with other Baltic states increased. That was not due to any re-routing of cargoes, however,” explained Mattern. Throughput with Russia, while 67.7 percent lower, still totalled 80,000 TEU. Over the same period, seaborne container handling with Poland rose by 38.5 percent to 237,000 TEU. Poland thus climbed from eighth to fourth place in the list of Hamburg’s Top Ten partner countries. Finland also belongs there, climbing into seventh place with a 32.7 percent increase. The list is traditionally topped by China, in 2022/III with 1.9 million TEU, i.e., down 1.2 percent. The USA has settled into second spot. For loaded boxes, the trade maintained its progress with 1.7 percent advance to 402,000 TEU. By contrast, the number of empty containers handled fell, so overall the port handled 442,000 TEU, or 3.9 percent fewer of these.

Further outlook for 2022
Prompted by the war in the Ukraine, the energy crisis has caused steep inflation in Germany and many European countries. This will also affect what is normally very strong Christmas business. At the same time, while bottlenecks off ports are shrinking, disruptions in supply chains have not yet all been eliminated. The market will therefore remain volatile for the remainder of the year. This may affect Port of Hamburg throughput.
Source: Port of Hamburg

2022-11-18
hellenicshippingnews...
Previous: Turkey’s Erdogan: Russian grain could be exported as flour to Africa via Turkey
Next: Korea, US to work on Busan-Seattle green cargo shipping corridor