On Thursday afternoon, 18 January, the Port of Rotterdam Authority put a new hybrid patrol vessel into operation. This concerns the RPA 8, a vessel 25 metres in length that can run on both diesel and diesel-electric. The vessel causes considerably less vessel wake and is much more efficient than other Port Authority vessels. It replaces the RPA 3, which had reached the end of its technical and economic service life. RPA 8 was built by Kooiman Group in Zwijndrecht.

“Commissioning this vessel is in keeping with the policy of stimulating sustainable sailing and setting an example as Port Authority,” stated (State) Harbour Master René de Vries. He is responsible for the safe, smooth, sustainable and secure handling of shipping. He has a fleet of patrol vessels that enable him to carry out this task. This is the first time since 2010 that the harbour master has put a new vessel into operation. Each year, around 30,000 sea-going vessels and 110,000 inland vessels arrive at the Port of Rotterdam. 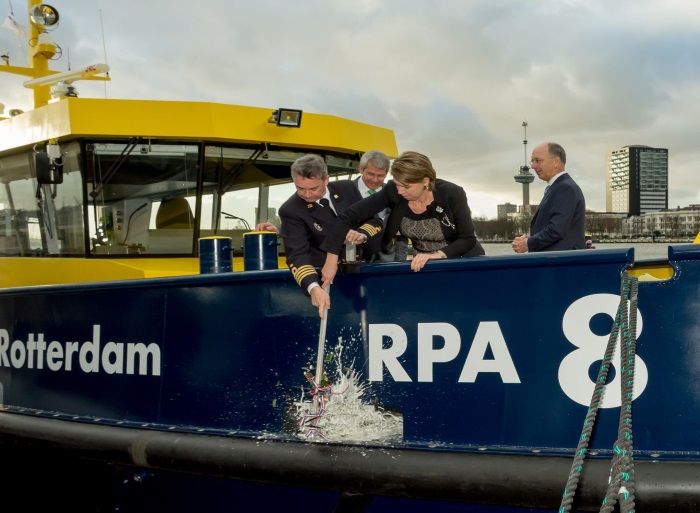 Reduced fuel consumption
RPA 8 uses considerably less fuel. The hybrid propulsion system enables efficient patrolling at low speeds and reduces the number of hours the diesel engines need to run at low load operation. The vessel’s special wing profile underwater results in reduced vessel wake. This is better for quay walls and other vessels as well as for fuel consumption. The hull is constructed from aluminium, three times as light as steel, which also results in a fuel consumption reduction. “All these innovations result in the RPA 8 saving the same amount of energy as 65 households consume in one year. This also reduces the vessel’s CO2 emissions; the level of reduced emissions is calculated to be equivalent to saving the annual planting of approximately 8,000 trees,” said René de Vries. The harbour master is also pleased with the much larger bridge. One navigation position has been created at the front and the harbour master’s specific duties are carried out on three consoles at the rear of the bridge and below deck.