Container trade at the Port of Savannah grew by 32 percent in October, with Garden City Terminal moving 410,000 twenty-foot equivalent container units, an increase of nearly 100,000 TEUs.

“Since the opening of the expanded Panama Canal, Garden City Terminal has experienced meteoric growth,” said GPA Executive Director Griff Lynch. “We’re now handling more ships, bigger vessels and larger cargo exchanges. By working more weekly vessel calls than any other East Coast port, and serving more neopanamax ships than any other port in the U.S. Southeast, Savannah has strengthened its position as a vital gateway to the global marketplace.”

Lynch said the Port of Savannah, with the nation’s single largest container terminal in North America, is playing a significant and growing role in supporting the nation’s economy, emphasizing the need for the timely completion of the Savannah Harbor Expansion Project.

“With deeper water, today’s 14,000-TEU ships will be able to transit the Savannah River with greater scheduling flexibility, and take on heavier export loads,” he said. “Because these larger vessels provide lower cost per container slot, they help make American farms and factories more competitive.” 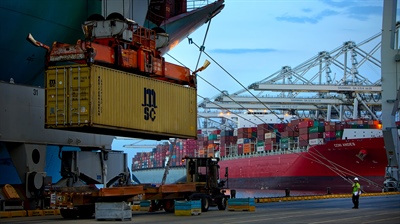 To date, the harbor deepening has been funded by $266 million in state funds and $127.8 million in federal construction dollars. The Administration’s FY18 budget proposal devotes $50.06 million to SHEP.

“Unfortunately, the current proposal will not cover all the work that could be completed in a year,” said GPA Board Chairman Jimmy Allgood. “We are working with our leaders in Washington in hopes that they will provide additional funds through the U.S. Army Corps of Engineers’ work plan.”

Allgood said better accommodating neopanamax vessels will yield a massive benefit for the nation’s economy by way of cost savings on transportation.

A Corps of Engineers economic impact study found the Savannah project to have the greatest benefit for the nation of any deepening project in the Southeastern U.S. According to the study, the Savannah Harbor deepening will return $7.30 for every dollar spent on construction. The Corps estimates the net benefit of transportation savings for shippers and consumers at $282 million per year. The expected total savings to the nation over the course of 50 years is $14.1 billion

Outer harbor dredging for the Savannah Harbor expansion is 60 percent complete, while work on other aspects of the project put the total progress at 35 percent completion. The outer harbor constitutes about half of the shipping channel from deep ocean to Garden City Terminal. Separate contracts will cover deepening the inner harbor.

Both Allgood and Lynch noted that the record growth was achieved through the incredible leadership and teamwork demonstrated by the GPA, the International Longshoremen’s Association, local stevedores and the entire Georgia logistics community that is second to none.
Source: Georgia Ports Authority