The Tokyo and Paris MOUs will this year carry out a joint concentrated inspection campaign (CIC) on emergency systems and procedures. The CIC will run from 1 September to 30 November 2019 and, at the time of writing, it has been announced that the Black Sea, Indian Ocean, Mediterranean, Riyadh and Viña del Mar MOUs will also participate in the campaign.

This year’s CIC aims to ensure compliance with the requirements for the preparation of emergency equipment and the crew’s ability to respond to emergency situations. Like previous years, the CIC will be included as an additional part of routine port state control (PSC) inspections during the implementation period and attending PSC officers (PSCO) will use a tailored questionnaire to verify specific topics and areas relevant to the CIC. According to a press release by the Paris MOU, the CIC questionnaire will be published in August 2019.

Deficiencies found during the inspections will be recorded by the PSCOs and actions may vary from recording a deficiency and instructing the master to rectify it within a certain time period, to detaining the ship until serious deficiencies have been rectified.

It is likely that, during the implementation period, PSC inspectors will pay close attention to the main deficiencies found during inspections over the previous years. The following should therefore be observed in terms of emergency systems:

The figure below presents all deficiencies related to the category ’04-Emergency Systems’ as recorded by the Paris MOU member states during 2017-2018. In addition to the mentioned emergency systems, the results clearly show that onboard emergency drills are not always carried out, or recorded, to the satisfaction of PSCOs. 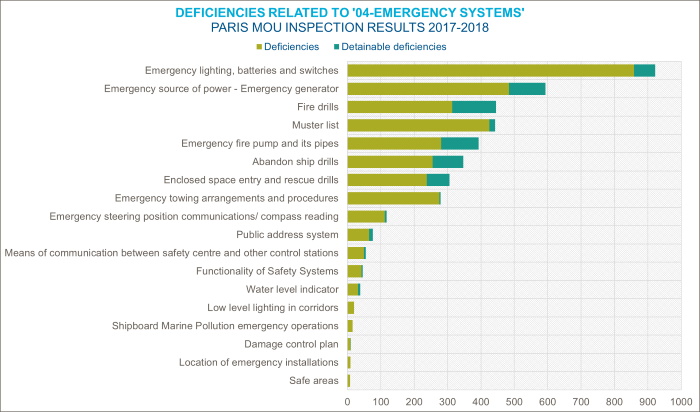 In preparation for the upcoming CIC, ship operators and their crews are encouraged to:

We strongly encourage Members and clients to use this CIC as a reminder of the importance of ensuring readiness of crew and equipment in case of any emergencies. It is important to carry out regular training for different emergency scenarios as well as to make sure that those involved in emergency drills understand that the purpose of training is to prevent and/or limit the consequences of accidents – and not simply to satisfy the regulators.

Under SOLAS Regulation III/19, every crew member is required to participate in at least one abandon ship drill and one fire drill every month and crew members with enclosed space entry or rescue responsibilities shall participate in an enclosed space entry and rescue drill once every two months. SOLAS also emphasizes that “drills shall, as far as practicable, be conducted as if there were an actual emergency” and that dates and details of the drills shall be recorded in the ship’s logbook.

For additional loss prevention advice on training and drills, please refer to Section 2.7 of the Gard Guidance to Masters. Our insight “Now may be a good time to review your enclosed space entry procedures” of 12 September 2018 may also be useful.
Source: Gard

Previous: What do Saudi Arabia’s moves in maritime law mean?
Next: Asian Oil Imports and the Crude Tanker Market