Ports of Rotterdam and Amsterdam: Joint preparations and traffic management for a possible no-deal Brexit

All partners including Customs, the Port of Rotterdam Authority, the Port of Amsterdam Authority, PortBase and the involved municipalities are working hard on preparations for a possible no-deal Brexit on 31 October 2019. The aim of the coordinated action is to minimise any delays resulting from additional customs formalities at Rotterdam en Vlaardingen ferry terminals.

So-called traffic circulation plans have been designed for this and parking sites have been designated for any trucks that do not have the necessary paperwork to meet the new customs formalities that come into places as soon as the United Kingdom leaves the European Union. 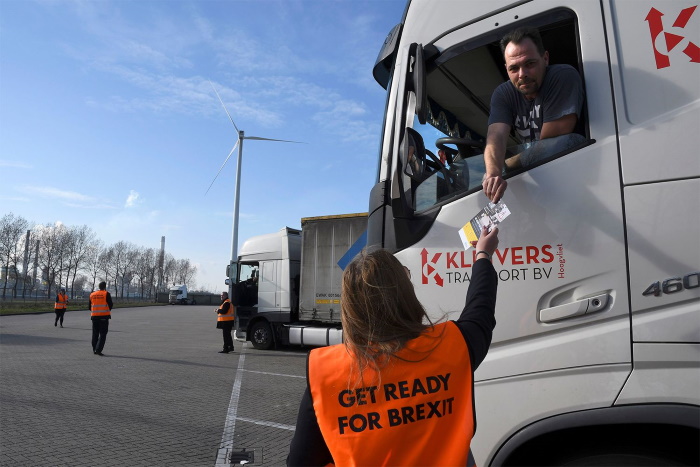 Make sure you are well prepared!
Exporters and importers must make arrangements as to who will register their cargo from or to the UK digitally in PortBase in advance. They can do this themselves or outsource this to intermediaries, such as a forwarder, customs agent or carrier. This is compulsory at all ferry terminals and at the majority of the short-sea terminals. This Dutch supply chain solution for Brexit will enable cargo to pass through customs quickly and without unnecessary delay to and from the UK, even after Brexit.

No customs documents, no pre-alert, no crossing
Buffer parking sites will be established again in the coming weeks for trucks that do not have the necessary paperwork. Truck drivers can use these locations to contact their client or transport planner to complete the necessary formalities. These temporary buffer parking sites are marked out on the map below. In the unlikely event that this extra capacity is insufficient, parties have additional overflow areas in reserve. Moreover, Rijkswaterstaat has discussed traffic control plans with all parties to safeguard efficient traffic flow. 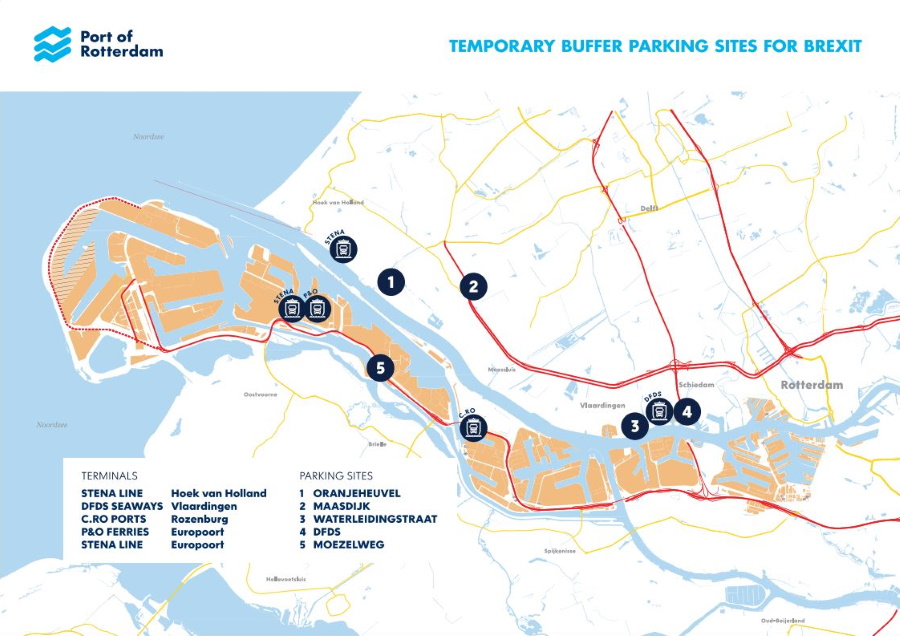 Traffic flow
A traffic plan has been formulated for each terminal and surrounding area, including measures to minimise any possible inconvenience resulting from trucks. This traffic plan aims to keep local and regional traffic moving. We will be doing this by guiding freight traffic that does not have the necessary paperwork to designated parking sites and preventing queue formation at the terminals.

Development of buffer parking sites
Rijkswaterstaat, together with the Port of Rotterdam Authority, the Municipality of Rotterdam, the Municipality of Vlaardingen, the Municipality of Velsen and the Province of South Holland, is creating 6 new buffer parking sites. All these temporary locations will be provided with fencing, lighting, sanitary facilities and security. Of the approximately 54 million tonnes of freight that is traded annually between the UK and the Netherlands, around 40 million tonnes pass through the port of Rotterdam, and in particular via ferry and short-sea crossings. As soon as Brexit becomes reality, the Dutch sea ports will form an outer border between the EU and the UK. For freight traffic via the Dutch ports, this will mean the inevitable customs formalities. In the event of a no-deal Brexit, these will come into force immediately.

Rotterdam, Hoek van Holland and Vlaardingen
The Municipality of Rotterdam has realised the Oranjeheuvel site on the northern bank in Hoek van Holland. This site is close to the Hoek van Holland ferry terminal. Rijkswaterstaat has realised space for around 200 trucks there. In Maasdijk, in the municipality of Westland, Rijkswaterstaat has created a buffer site for around 24 trucks. In the Municipality of Vlaardingen, 80 spaces are being created on the DFDS site. A secondary holding site is being created on Waterleidingstraat for around 80 trucks.
On the southern bank, buffer parking sites are being created on Moezelweg contracted by the Port of Rotterdam Authority. The largest site on Moezelweg will provide space for approximately 280 trucks. This site is in the vicinity of the ferry and short-sea terminals that operate out of the Europoort and Rozenburg port areas. The site can easily be reached from the A15 motorway, from both the easterly and westerly directions.

IJmuiden
Rijkswaterstaat, the Municipality of Velsen and Sea Port IJmuiden are together establishing a parking site in the ‘Blokkenterrein’ (Rijkswaterstaat storage area) on Zandvoortstraat in IJmuiden. Truck drivers can use this temporary location to liaise with their client or transport planner to ensure that they can complete the necessary formalities without causing parking and other inconvenience. The temporary parking area can accommodate 45 trucks.
Source: Port of Rotterdam Authority, Port of Amsterdam Authority