For the three months ended 30 June 2018 (“Q2 FY2018”), POSH almost doubled its revenue, recording a 95% increase year-on-year (“YoY”) to US$83.1 million. This was mainly due to improved average daily charter rates, particularly for the OA segment, and improved utilisation, for which the OA Semi-Submersible Accommodation Vessel (“SSAV”) segment reported 100% utilisation.

Net loss attributable to shareholders (“NLAT”) for the period was US$5.8 million, a 47% improvement from the US$11.0 million net loss recorded for Q2 FY2017. 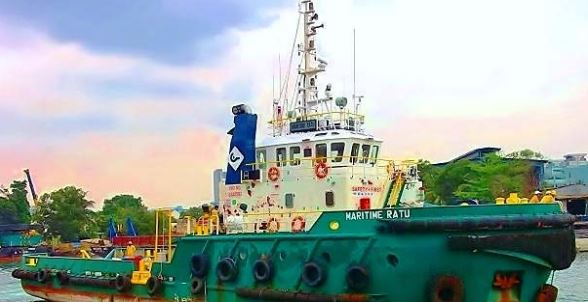 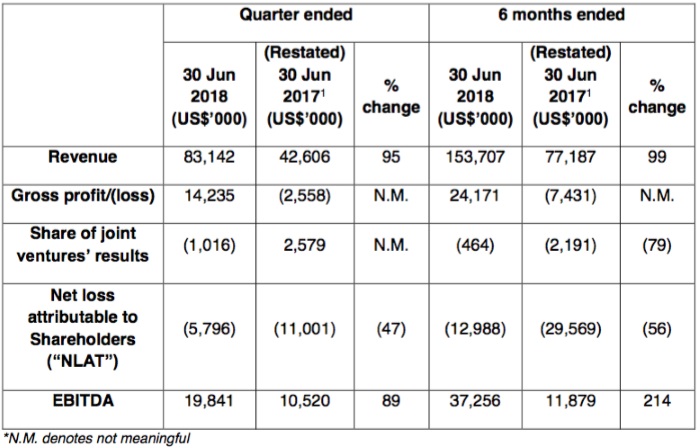 Net loss attributable to shareholders was US$13.0 million, narrowing from a loss of US$29.6 million for 1H FY2017.

General and administrative expenses for 1H FY2018 increased 42% to US$17.4 million mainly due to increase in personnel expenses as a result of the reversal of bonus provision in 1H FY2017, increased legal costs, as well as higher allowance for doubtful debts. 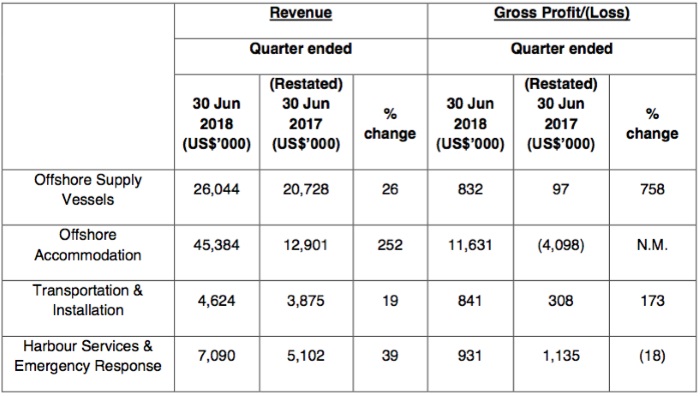 Revenue increased 26% to US$26.0 million as vessel utilisation improved to 76% (Q2 FY2017: 64%) mainly attributable to the full contribution of 12 vessels (Q2 FY 2017: 6 vessels) deployed under long term charters to a Middle East National Oil Company. Notwithstanding increased operating expenses and lower average daily charter rates, the OSV segment was able to record a higher gross profit of US$0.8 million in Q2 FY2018 compared to US$0.1 million in Q2 FY2017.

Revenue increased by 252% to US$45.4 million as both our 750 pax SSAVs POSH Arcadia and POSH Xanadu were fully employed during Q2 FY2018. In addition to the improved performance of the SSAVs, the other OA vessels also reported higher average daily charter rates and utilisation. The segment registered a gross profit of US$11.6 million, compared to a gross loss of US$4.1 million in the previous corresponding period.

Revenue increased 19% to US$4.6 million on higher vessel utilisation which resulted in an improved gross profit of US$0.8 million (Q2 FY2017: US$0.3 million).

HSER saw a 39% increase in revenue to US$7.1 million, mainly due to higher revenue recorded from salvage jobs and heavy lift vessels.

Whilst market sentiment is more positive amid signs of increased investment and Capex in offshore oil field development, the oversupply of OSV vessels continues to exert pressure on both utilisation and charter rates.

The two SSAVs will remain employed in current charters until Q3 FY2018, and POSH Xanadu will commence her new charter to Petrobras in December 2018 for a firm period of 8 months and with an option to extend for a further 8 months.

Captain Gerald Seow, Chief Executive Officer of POSH, said, “We are encouraged by our sustained performance over the past quarter. Even as market conditions remain challenging, we continued to make headway in improving overall performance and securing new contracts. We have also expanded into new growth areas including subsea and offshore renewables.