Powerful growth in the China-owned fleet

In recent years the fleet of merchant ships owned by companies based in China has continued to grow strongly. This performance reinforced an already entrenched upwards trend, and signs point to further advances in the future.

Expansion of the China-owned fleet of bulk carriers, tankers, container ships, gas carriers and other vessel types has enabled rising shares of seaborne imports to and exports from China to be carried. Becoming less dependent on foreign shipowners in these trades has been an aim of national transport policy. Involvement of nationally-owned ships in trades where China is not an importer or exporter (‘cross-trades’) also was facilitated.

Merchant ship fleet enlargement propelled China into second place among the world’s shipowning countries. For many years Japan was number two, measured by cargo-carrying capacity, with Greece remaining by far the largest. After overtaking Japan, future growth in China’s capacity may reduce the gap between the two biggest fleets.

An upwards trend
From around one-twentieth of the world total in the early 2000s, the China-owned merchant ship fleet now comprises about one-seventh, following remarkable growth over two decades. Bulk carrier capacity is still the largest component after growing strongly. All the other categories – tankers, container ships, and a wide range of additional vessel types – have seen rapid increases at differing rates.

During the past decade the capacity of the China-owned merchant ship fleet has more than doubled. According to data compiled by Clarksons Research, based on gross tonnes as a common measurement for all vessel types, the total at the end of 2011 was 106.0 million gt, rising to 223.7m gt at end-2021. This 111 percent increase resulted from an annual average growth rate of 7.8 percent. The trend is illustrated by the graph. 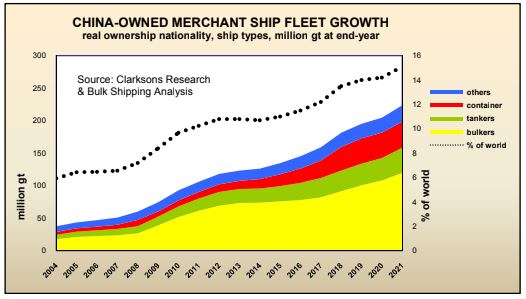 Variations in annual increases often have been a feature. After a period of five years from 2008 to 2012 when annual rises of between 12 and 25 percent were recorded, an abrupt slowdown was seen. In 2013 and 2014 growth was 4 percent and 2 percent respectively. Since then, in the past seven years from 2015 to 2021, an acceleration to growth rates varying within a 5 to 14 percent range unfolded.

Merchant ship fleet enlargement during the past seven years totalled 97.4m gt, from 126.3m gt at end-2014, to the 223.7m gt total at the end of 2021. Almost half of the overall fleet expansion during the period was comprised of bulk carriers, including ore carriers (47 percent). About one quarter was container ships (26 percent), followed by tankers (17 percent) and other vessel types (9 percent).

Acceleration in 2021
Rapid growth in the China-owned bulk carrier and tanker fleets contributed to accelerating merchant fleet capacity expansion during 2021. The entire fleet of all ship types increased last year by almost 19m gt or 9.3 percent. About three-fifths of the incremental capacity was comprised of bulk carriers, with a 11 percent increase. Tankers comprised over a fifth of extra capacity, growing by 12 percent, while container ships and other types contributed the remainder.

Higher ordering of new tonnage at shipbuilding yards in the two previous years, by owners based in China, was reflected in a newbuilding deliveries upturn in 2021. These deliveries rose by 5.2m gt or 66 percent, reaching 13.2m gt. Another influence boosting fleet growth was a parallel upturn in ships purchased second-hand, rising by 4.9m gt (51 percent) to 14.5m gt. These additions were partly offset by a stable scrapping volume at just over 1m gt, accompanied by a rise in sales on the second-hand market which increased four-fold to a record high level of just under 8m gt.

This combination of influences affecting last year’s China-owned fleet evolution illustrates how the impact of new ship capacity entering the fleet is often modified by several other changes. In 2021 extra purchases of second-hand ships boosted the fleet almost as much as the increase in newbuilding deliveries. Moreover, although sales for scrapping were unchanged at a relatively low level, sales on the second-hand market increased to offset a large part of the additional capacity joining the fleet.

Future new fleet capacity
The delivery schedule of newbuildings joining the fleet is not always a totally reliable indicator of the future volume and timing of capacity additions, although it is a useful approximation. Delivery timing sometimes changes, compared with the scheduled pattern recorded, due to delays and postponements. Other aspects, cancellations, or orders ‘converted’ to another ship type, typically are fairly minor features.

Over the past three years an upturn in newbuilding orders by shipowners based in China unfolded, a consequence of which was an expanding orderbook (as deliveries of ships previously contracted were outpaced by the incoming volume of new orders). The next chart shows merchant ship newbuildings on order at the end of each year, in volume and as a proportion of the existing China-owned fleet, the tonnage of which is also shown. An orderbook recovery in 2013-2015 after a previous decline was followed in the 2016-2019 period by a resumed downwards trend. Subsequently, during 2020 and 2021, the orderbook increased.

At the end of 2019 the orderbook for merchant ship newbuildings placed by owners in China fell to 18.8m gt, the lowest volume since 2006, equivalent to a relatively low 9.6 percent of the existing China-owned fleet of ships. Over the next two years the orderbook total rose by almost ten million tonnes to reach 28.6m gt at end-2021, equivalent to 12.8 percent of the existing fleet’s capacity. Within this end-2021 total 9.0m gt was scheduled for delivery during 2022, followed by12.3m gt in 2023. 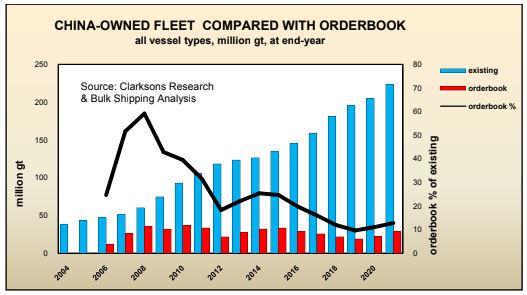 The newbuilding delivery schedule for 2022 suggests that actual deliveries will be well below the total seen last year, assuming that the scheduled volume is a fairly reliable calculation. By the beginning of any year limited time is available for additional orders to be placed for delivery in the twelve months ahead. Typically there is insufficient time available to complete construction, while often shipyard berths are not available due to existing orders being built. Consequently the 2022 scheduled figure (of 9.0m gt) probably is a valid guide, surmising that there are no or few unrecorded orders. However, there is potential for the 2023 total of 12.3m gt to rise, amid owners becoming more positive about adding new capacity.

Among newbuildings on order for owners in China, several categories of large ships are a feature. An especially prominent category is container ships of between 14,000 twenty-foot equivalent units and 24,000 teu. At the beginning of this year, 5 ships in this size group were scheduled for delivery during 2022, followed by 28 in 2023 and 30 in 2024 and later years. In the large bulk carrier category, orders for 210,000 dwt newcastlemax ships numbered 9 scheduled for delivery this year, followed by 7 in 2023 and 4 in 2024 and later. Three guaibamax 325,000 dwt ore carriers to be delivered in 2022 were also recorded. In the tanker very large crude carrier (vlcc) category, 5 ships of 300-307,000 dwt were scheduled for delivery this year. Liquefied natural gas carriers of 174,000 cubic metres numbered 6 for delivery from 2022 onwards. More orders for large merchant ships have been added in the past few months.

Ship employment perspectives
Specific parts of the China-owned merchant ship fleet’s evolution are linked to identifiable commodities, cargoes and trade routes, although the linkage sometimes appears to be flexible. The huge scale of crude oil, gas and iron ore imports into China, in particular, have stimulated the expansion of the country’s vlcc, gas carrier and ore carrier fleets. Exports and imports of manufactured and semi-finished goods provided an incentive for the growth of China’s container ship fleet. Other examples are prominent.

Often it seems fairly clear that additions to the fleet are or will be wholly or mostly employed in trades where China is at one end of the route or routes involved, either as importer or exporter. A full analysis is not feasible because of limited information about intentions or contracts. But available observations of ships’ geographical employment patterns and actual movements provides substantial confirmation of how and where specific types and sizes are employed.

Future changes in trade volumes and patterns could have an impact on how the fleet evolves. In the import trades, after China’s commodity imports saw a strong upwards trend over an extended period of years, there are now tentative signs of growth slowing or ceasing in parts. One element is iron ore imports – exceeding one billion tonnes annually – which appear to have reached a plateau. Within this trade, ore imports from Brazil, use of China-owned 400,000 deadweight valemax ore carriers has expanded, and guaibamax 325,000 dwt ore carriers are still being added. Whether many more newbuildings for this or other trades will be ordered is not clear but, arguably, potential exists for China-owned ships to increase market share in several commodity trades even if volume growth has lost momentum.

It seems likely that numerous ships will be mostly employed in the country’s import or export movements, or alternatively in the massive China coastal trades. Another source of employment is the international cross-trades, where China is not a voyage destination or origin. How the trend of China-owned ships’ involvement in this trade category will evolve during future years is difficult to assess, but it could prove substantial. Although the strategic drivers are not altogether clear, observed patterns point to continuing employment in the cross-trades, influenced by global market trends, freight rates and profitability.

Expectations of fleet growth
Support for newbuilding orders may be derived from replacing older vessels in the China-owned fleet. Currently, the proportion within the age group of 25 or more years varies among the main ship types, according to calculations by Clarksons Research, based on the number of vessels. While in the tanker fleet the older 25+ age proportion is minimal, at 1 percent, larger proportions are recorded in bulk carriers (7 percent) and container ships (9 percent). These percentages seem to indicate potential for additional replacement orders to emerge.

Growth in the China-owned fleet in 2022 and further ahead will depend partly on the number and scale of changes in other influences. As seen in the past twelve months, second-hand ship purchases greatly augmented capacity. Also, even though scrapping was a minor element, ship sales into the second-hand market provided a large offset, limiting the fleet growth facilitated by newbuildings and second-hand purchases. Estimates of future changes are speculative, because many unpredictable influences affect decisions by owners.

Further expansion of the China-owned fleet arguably is likely over the next several years. But the evidence base is quite thin, and such expectations tend to reflect recent trends and observed characteristics. One possible outcome is that future merchant ship fleet expansion may not maintain the average 8.5 percent per annum seen in the past seven years from 2015 to 2021.

Ideas about the China-owned merchant ship fleet’s future trend are based upon a few solid signs, coupled with assumptions and speculation. Nevertheless continued, perhaps robust expansion seems a plausible expectation. This view is supported by official and unofficial narrative about intentions, emerging over a number of past years. It also reflects the more tangible indicator of newbuildings on order and the likely pattern of deliveries, assuming all vessels ordered will be delivered. Replacements for older tonnage in the existing China-owned fleet could ensure that a firm foundation for future fleet growth is reinforced.
Source: Article by Richard Scott, Managing Director, Bulk Shipping Analysis and visiting lecturer, London Universities for Hellenic Shipping News Worldwide