Adding iron or other nutrients into the oceans to enhance natural processes to draw carbon from the atmosphere and creating foams which float on the surface of the sea to reflect sunlight back into the atmosphere are among a wide range of geoengineering practices which have been put forward as potential tools for countering climate change.

But, in a new report, marine and social scientists are urging a precautionary approach towards these techniques which involve deliberate large-scale manipulation of the environment. 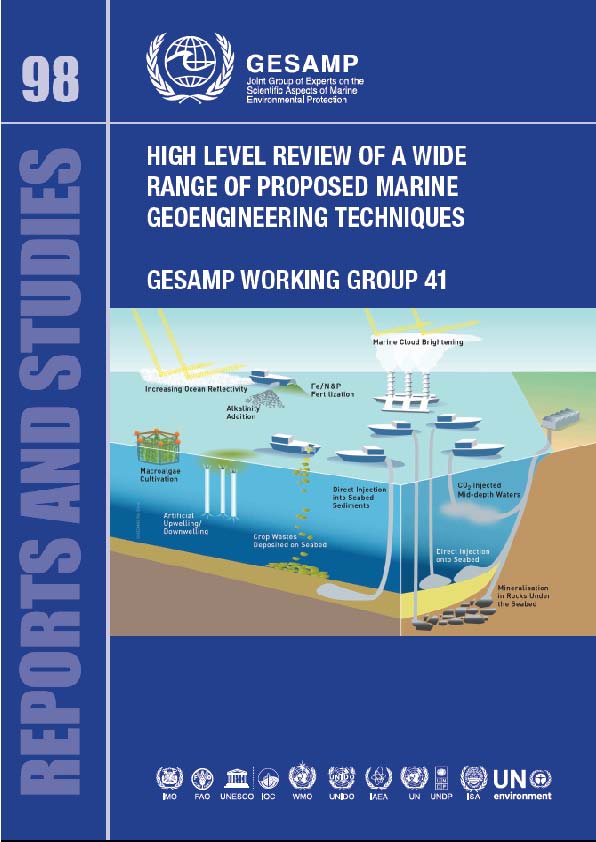 Marine and social scientists are urging a precautionary approach towards marine geoengineering techniques which involve deliberate large-scale manipulation of the environment. Cick cover to download report in PDF format.

“It is essential that the process of evidence-based assessment takes place in parallel with ongoing efforts to devise research governance structures, since both are inextricably linked in the marine geoengineering debate and the development of policy,” the report says.

The High level review of a wide range of proposed marine geoengineering techniques is the first to comprehensively examine the many proposed ways to remove carbon dioxide from the atmosphere or boost the reflection of incoming solar radiation to space (known as “albedo modification”) – or, in some cases, both.

Co-editor Dr Philip Boyd, Professor of Marine Biogeochemistry at the Institute for Marine and Antarctic Studies at the University of Tasmania in Hobart, Australia, said the report marks an important step in identifying marine geoengineering approaches and highlighting issues that policy makers, regulators and governments will need to consider.

“The vast area, immense volume and potential large capacity for storing carbon dioxide of the world’s oceans mean that many approaches for marine geoengineering have been proposed. This report highlights the need for sound scientific evidence for each approach that may be considered by policy makers and regulators. There are legal, socio-economic, and geo-political considerations that will need to be taken into account,” said Dr Boyd.

One of these, ocean iron fertilization, has already been addressed by the London Convention and Protocol, the treaties which regulate the dumping of wastes at sea- under which it is prohibited, except for legitimate scientific research. Parties to the London Convention and Protocol have adopted an “Assessment Framework for Scientific Research Involving Ocean Fertilization” (Resolution LC-LP.2(2010)), which guides Parties on how to assess proposals for ocean fertilization research and provides detailed steps for completing an environmental assessment, including risk management and monitoring.

This assessment framework for ocean fertilization was used as a template for assessing the different approaches in the study. However, the information that underpins each approach varies widely with respect to what is needed for a scientific assessment, from insufficient (i.e. no assessment is possible) to incomplete (i.e. a partial assessment could potentially be undertaken).

The GESAMP report recommends future work, including developing a streamlined, robust framework for scientific assessment that engages proposers of individual techniques and provides the opportunity for effective, transparent scientific review. It also advocates that there should be a clear focus on the potential environmental and socio-economic, geopolitical and other relevant societal aspects of marine geoengineering assessments.

“This framework is essential to promote a transition towards a more holistic assessment that includes social, political, economic, ecological, ethical and other societal dimensions. Marine geoengineering approaches must be grounded in strong underpinning science, and then explored, and potentially developed, in a manner that is useful and acceptable to society,” the report says.

Until a marine geoengineering technique can be scientifically assessed, “it is difficult to provide a portfolio of the benefits and drawbacks of each approach that can be examined through the lenses of legal, socio-economic and geo-political considerations. In addition, a far-from-complete portfolio also hinders the type of public engagement which will be required to facilitate informed societal and political decision-making on research into marine geoengineering.”

Fredrik Haag, Head of the Office for the London Convention/Protocol and Ocean Affairs at the International Maritime Organization (IMO), and the IMO Technical Secretary of GESAMP, said the report is an important first step in identifying and reviewing marine geoengineering techniques. “This is particularly important in the context of the United Nations Agenda for Sustainable Development; not just in relation to Sustainable Development Goal 13, which urges action to combat climate change, but also SDG 14, which seeks to ensure sustainable use of the oceans,” Mr. Haag said.