Compatibility of residual bunker fuels has always been relevant. Mixing fuels onboard is often considered bad practice, however it is generally unavoidable.

Instances of HSFO incompatibility have been relatively rare in the past, given the mostly similar nature of different HSFO streams. This is not going to be the case with VLSFO. With varying nature and quality parameters, these fuels are particularly sensitive to mixing, which will likely result in more instances of incompatibility, affecting fuel suppliers and owners alike.

As part of IMO2020 preparation, Integr8 Fuels conducted a study where VLSFO samples were gathered from various suppliers across the world. Knowing individual fuel properties, a theoretical methodology was used to assess stability of a blend of two different VLSFOs without testing the actual blend. Such a methodology could prove to be extremely helpful for bunker procurement going into 2020 and beyond.

In order to confirm the accuracy and practical usefulness of this methodology, each case of predicted compatibility was compared with actual physical compatibility tests, which involved mixing the fuels in question to see how they react with each other. The study concluded that the proposed methodology can be used to predict compatibility with a high level of accuracy and be a very useful tool for buyers of VLSFO.

Why does commingling occur?

To a certain degree, commingling is unavoidable and the risks of commingling occur even if the bunker tanks have been emptied, as sludge and unpumpable volumes may still be present.

The risks of commingling and the varying nature of VLSFO

The main, but not the only risk of commingling, is associated with asphaltene sludge formation. This can happen when two perfectly stable fuels are mixed together creating an unstable blend.

Unlike HSFO, VLSFO’s nature and specs are expected to vary greatly. Different suppliers will offer different fuels with a paraffinic, naphthenic or aromatic predominant base. Mixing such fuels may produce an unstable blend in which asphaltene separation occurs. This can result in clogged filters and separators and in extreme cases lead to engine power loss.

Unlike HSFO, VLSFO’s nature and specs are expected to vary greatly

Buying VLSFO of similar nature could help minimise compatibility issues, but our study shows that even fuels of the same nature may pose compatibility challenges if mixed.

How is stability of a blend of fuels ensured today?

There are two main tests that cover stability: the spot test and the Total Sediment Potential (TSP) test. The spot test can be done onboard the vessel, but the more thorough reference test (TSP) is done in the lab normally taking over 24 hours to get the result.

Due to the nature of bunker operations it’s often not possible to pre-test the fuel before taking it onboard, and even less so before fixing the stem — i.e. entering into a contractual obligation to buy it.

This compatibility study is based on using a method to predict the ability of a blend of two VLSFOs to keep asphaltenes in suspension and, therefore, not allowing for sludge formation.

Sixteen VLSFO samples of different nature were collected for the study from various suppliers and main locations (Figure 1). These samples resulted in 120 blend combinations (50/50 ratio) to test the method on. 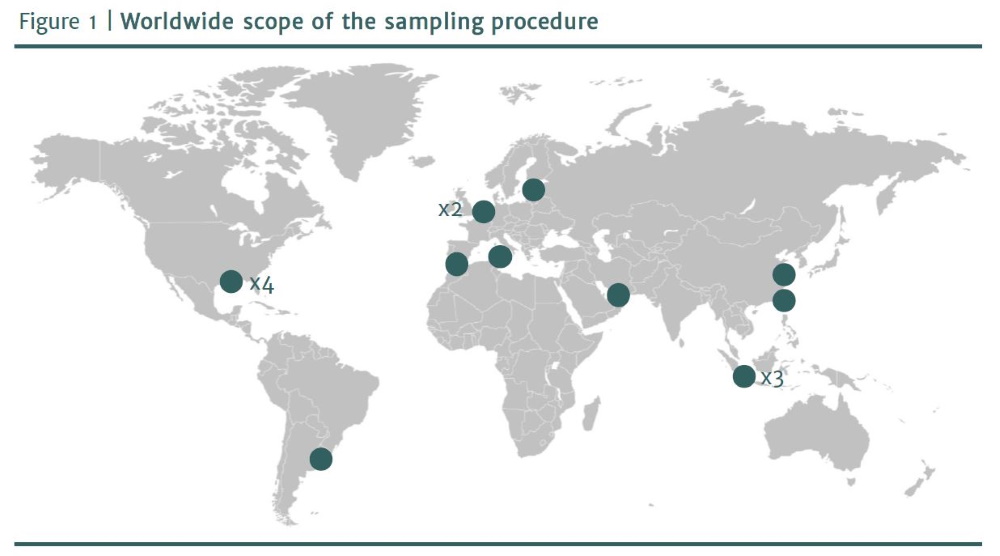 ISO8217 was performed on each sample, together with the following additional tests that are necessary for the compatibility prediction methodology utilised:

The study results showed that around 18% of the blends were unstable, meaning the individual fuels forming those blends were incompatible with each other

If asphaltene content, ALA and MRLA are known for the individual fuels to be mixed then, once the proportion of each fuel in the mixture is determined, the expected ALA and MRLA of the blend can be calculated using a formula.

In order to confirm the accuracy of the proposed methodology, physical compatibility tests were performed on the blends, i.e. the spot test and TSP. The predicted results were then compared with these actual physical test results.

Theoretical compatibility was run on all 120 blends, with confirmatory physical spot and TSP tests performed on 17 randomly selected blends. Physical tests showed that around 18% of the blends were unstable, meaning the individual fuels used to produce the mixture were incompatible with each other. This result highlights the importance of methodologies that can predict fuel compatibility, as the likelihood of two VLSFOs being incompatible is rather high.

The accuracy of compatibility predictions was high

Table 1 summarises the results of the tests conducted, which show that the level of accuracy reached is high, having obtained only one false incompatible result — i.e. the methodology predicted fuels to be incompatible, when they could be mixed and remain stable — and no false compatible results — i.e. the methodology predicting fuels to be compatible, when they actually turned out to be unstable when mixed.

From a risk management perspective, the robustness of the methodology comes from its ability to highlight instances where supposedly compatible fuels would in reality be incompatible. The methodology used requires further testing and calibration, but these preliminary results are very promising.

Working on the basis of standard ISO8217 testing

The methodology presented appears to have a great ability to predict compatibility of different fuels, but always provided these three additional properties — asphaltenes, ALA and MRLA — are tested along with ISO8217.

An interesting side result of the study is that some ISO8217 properties can be used as indicators of potential compatibility between different fuels. None of these have the predicting power of the methodology presented above, but they can still be used for compatibility guidance in the absence of extended testing. 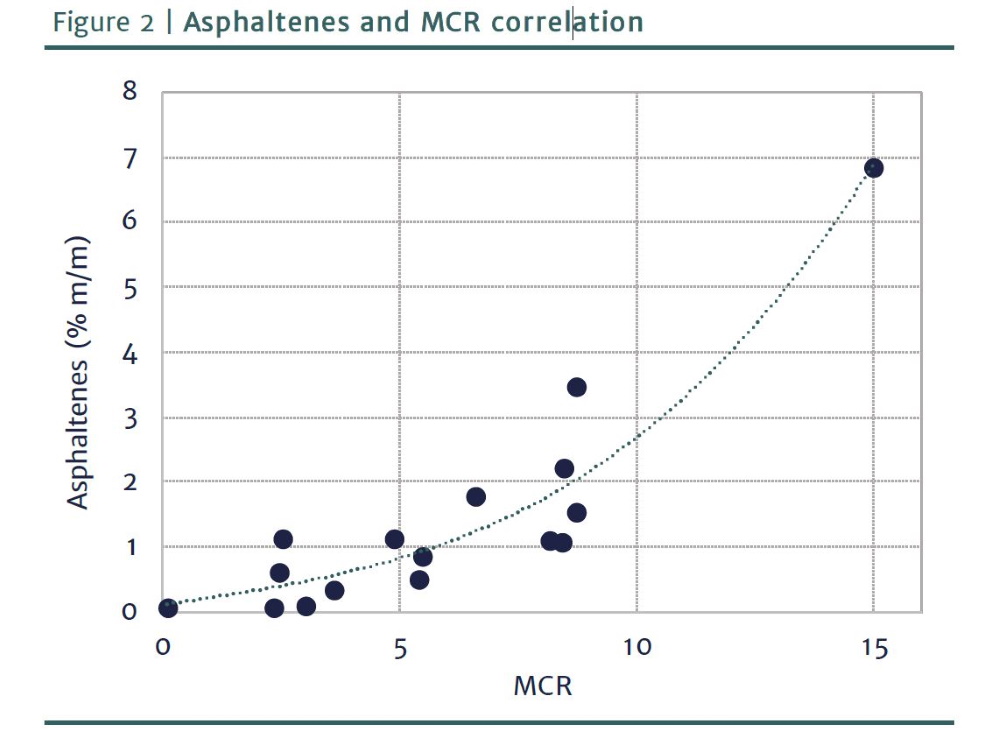 Another interesting relationship between variables that arose from the study is that between ALA (Aromaticity Index) and density (Figure 3). Even though ALA is calculated from viscosity and CCAI (which is calculated from density and viscosity), data shows that viscosity plays a minor role and higher density VLSFOs can be associated with higher ALA fuels. 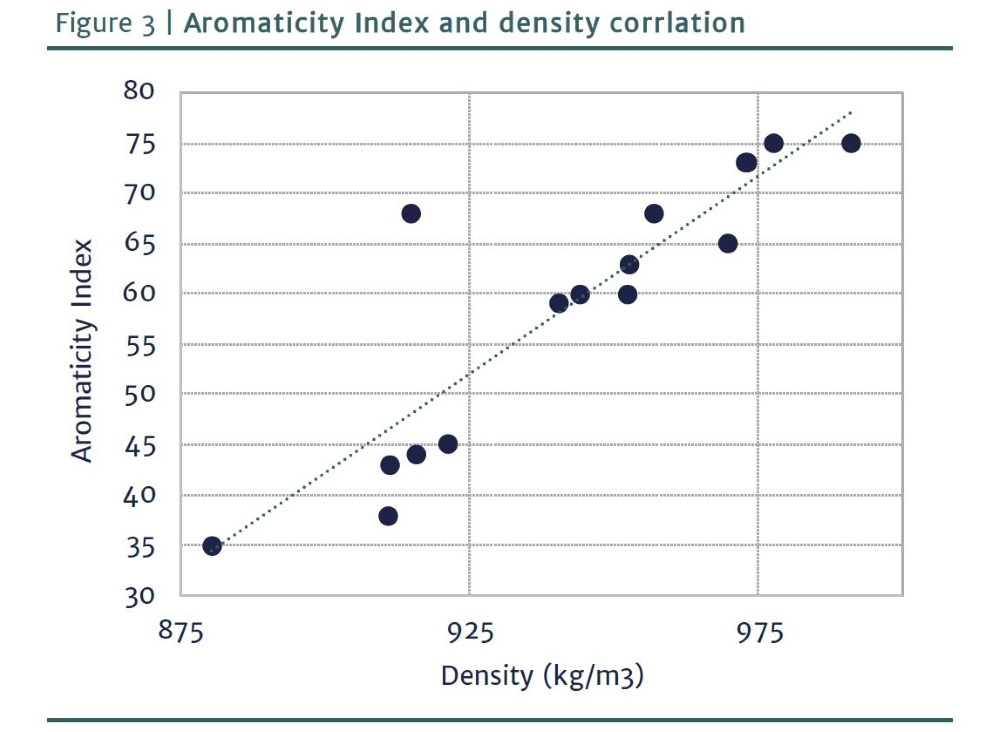 Based on these correlations, the following general guidelines can be set based on the test results of the standard ISO8217 fuel testing:

Compatibility is a cause of great concern for owners as VLSFO has proven to be more prone to stability issues when mixed, than its high-sulphur counterpart, which rightfully increases owners’ concerns.

The study shows that it is possible to predict blend stability with high accuracy using additional to ISO8217 testing. In this regard, Integr8 Fuels will continue expanding its sampling program and testing the methodology to help owners navigate the new bunker space.

VLSFOs’ lower tolerance to comingling calls for better bunker planning. Owners should always consider options from different suppliers and, where possible, try to ascertain the nature and quality of the fuel before fixing or delivery. Quality and compatibility have gone from a problem to face once fuels have been delivered onboard, to a problem better dealt with at the point of purchasing. Integr8 Fuels have invested heavily in building the largest pool of fuel quality data to help owners in making informed decisions.
Source: Integr8 Fuels

Previous: Shipping number of the week: 82% drop in US soya bean exports to China
Next: In Shipping Markets, Rollercoaster Rides Are the Main Theme