Predicting the next U.S. recession

The recent rise in U.S.-China trade war tensions has brought forward the next U.S. recession, according to a majority of economists polled by Reuters who now expect the Federal Reserve to cut rates again in September and once more next year.

Morgan Stanley forecast that if the U.S. lifts tariffs on all imports from China to 25 percent for 4-6 months and China takes countermeasures, the U.S. would be in recession in three quarters.

Goldman Sachs Group said on Sunday that fears of the U.S.-China trade war leading to a recession are increasing and that Goldman no longer expects a trade deal between the world’s two largest economies before the 2020 U.S. presidential election.

Global markets remain on edge with trade-related headlines spurring big moves in either direction. On Tuesday, U.S. stocks jumped sharply higher and safe-havens like the Japanese yen and Gold retreated after the U.S. Trade Representative said additional tariffs on some Chinese goods, including cell phones and laptops, will be delayed to Dec. 15.

Besides watching developments on the trade front economists and investors are watching for signs they hope can alert them to a coming recession.

The U.S. yield curve plots Treasury securities with maturities ranging from 4 weeks to 30 years. When the spread between the yield on the 3-month Treasury bill and that of the 10-year Treasury note slips below zero, as it did earlier this year, it points to investors accepting a lower yield for locking money up for a longer period of time.

As recession signals go, this so-called inversion in the yield curve has a solid track record as a predictor of recessions. But it can take as long as two years for a recession to follow a yield curve inversion.

The closely-followed yield spread between U.S. 2-year and 10-year notes has also narrowed – marking the smallest difference since at 2007 – according to Refinitiv data. 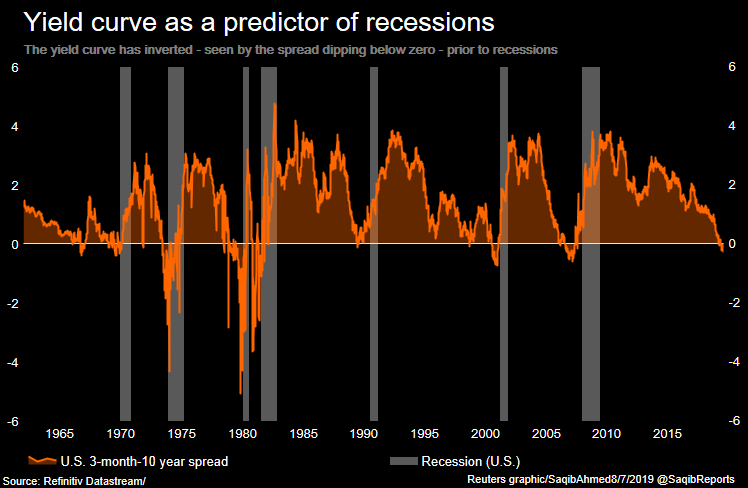 “Although job gains have slowed this year, they continue to signal an above-trend economy,” economists at BofA Merrill Lynch Global Research said in a recent note.

Claims will be watched over the coming weeks for signs that deteriorating trade relations between the United States and China, which have dimmed the economy’s outlook and roiled financial markets, were spilling over to the labor market. 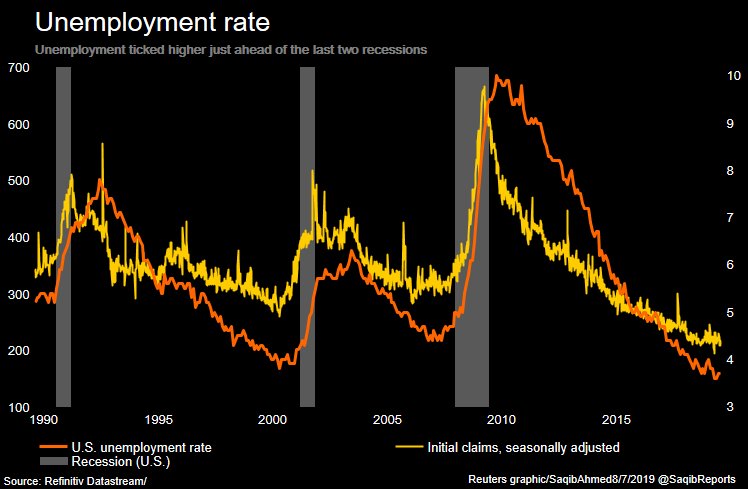 The output gap is the difference between actual and potential economic output and is used to gauge the health of the economy.

However, the output gap can linger in positive territory for years before a recession hits. 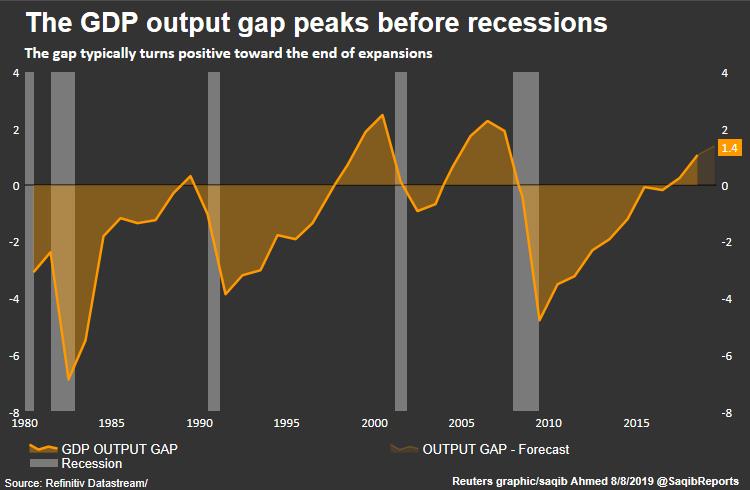 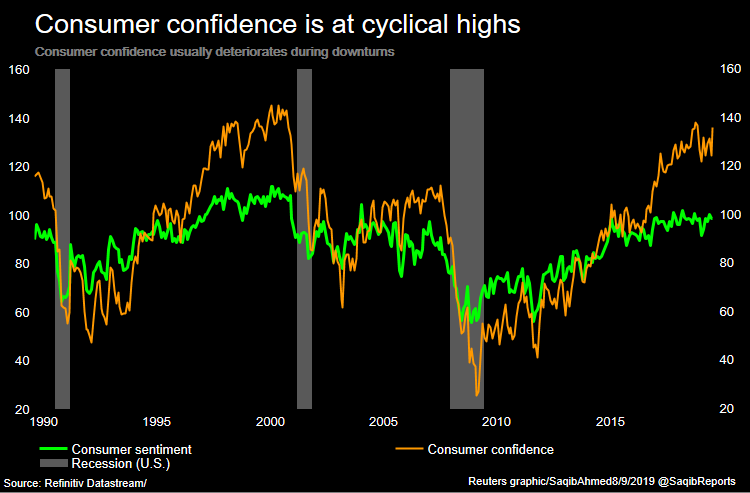 Falling equity markets can signal a recession is looming or has already started to take hold. Markets turned down before the 2001 recession and tumbled at the start of the 2008 recession.

The recent pullback in U.S. stocks has done its share to raise concerns about whether the economy is heading into a recession. On a 12-month rolling basis, the market has turned down ahead of the last two recessions. The 12-month rolling average percent move is now below the recent highs of January 2018 but still above higher than the lows hit in December. 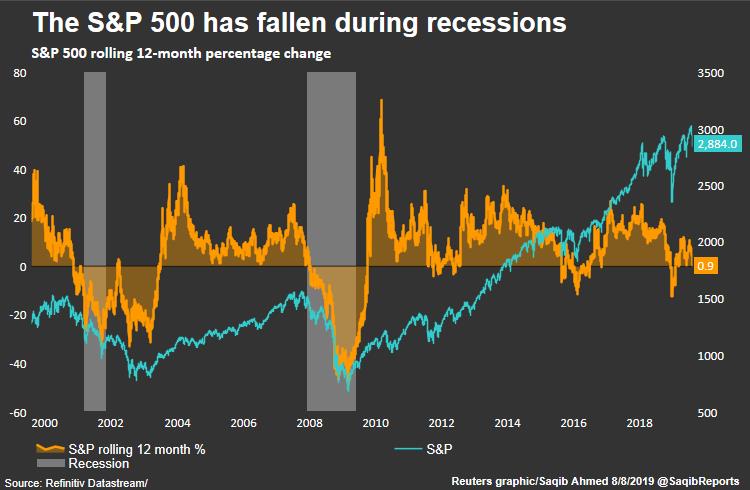 The Boom-Bust Barometer devised by Ed Yardeni at Yardeni Research measures spot prices of industrials inputs like copper, steel and lead scrap, and divides that by initial unemployment claims. The measure fell before or during the last two recessions and has retreated from a peak hit in April. 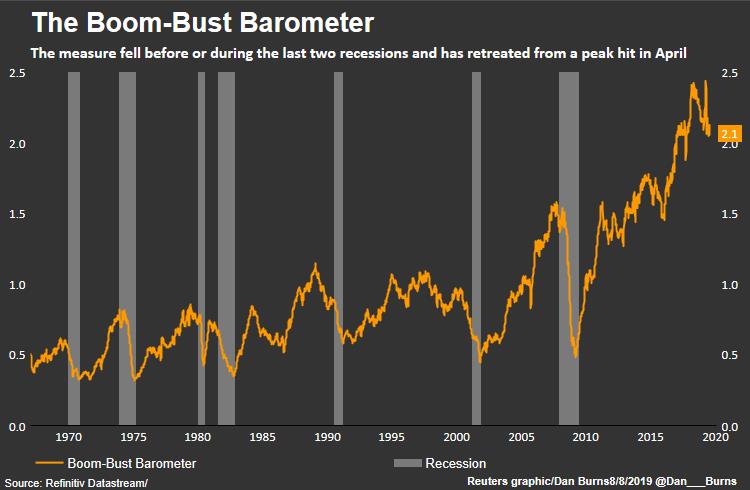 Housing starts and building permits have fallen ahead of some recent recessions. U.S. homebuilding fell for a second straight month in June and permits dropped to a two-year low, suggesting the housing market continued to struggle despite lower mortgage rates. 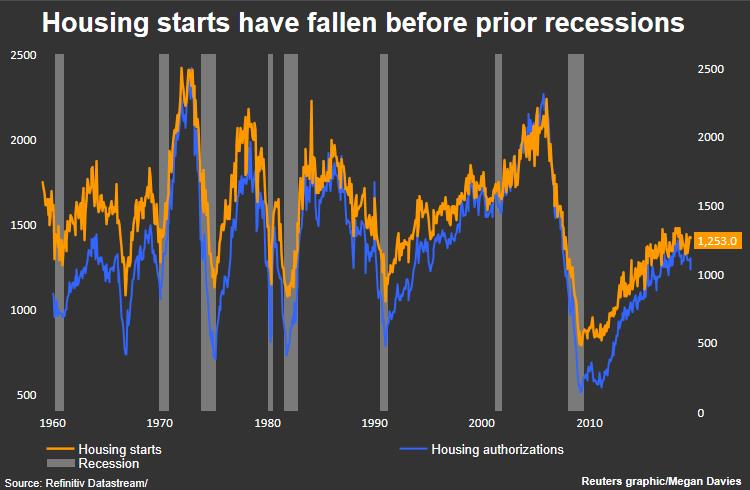 Given the manufacturing sector’s diminished role in the U.S. economy, the clout of the Institute for Supply Management’s (ISM) manufacturing index as a predictor of U.S. GDP growth has slipped in recent years. However, it is still worth watching, especially if it shows a tendency to drop well below the 50 level for an extended period of time.

ISM said its index of national factory activity slipped to 51.2 last month, the lowest reading since August 2016, as U.S. manufacturing activity slowed to a near three-year low in July and hiring at factories shifted into lower gear, suggesting a further loss of momentum in economic growth early in the third quarter.

“The slowdown in manufacturing activity likely reflects, in part, the tariffs that went into effect over the course of last year,” economists at BofA Merrill Lynch Global Research said in a note on Friday. 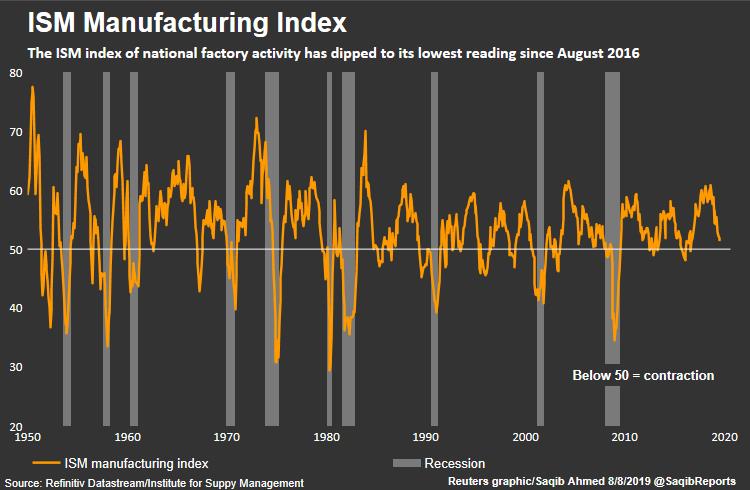 S&P 500 earnings growth dipped ahead of the last recession. Earnings estimates for S&P 500 companies have been coming down but companies are still expected to post growth for most quarters this year. 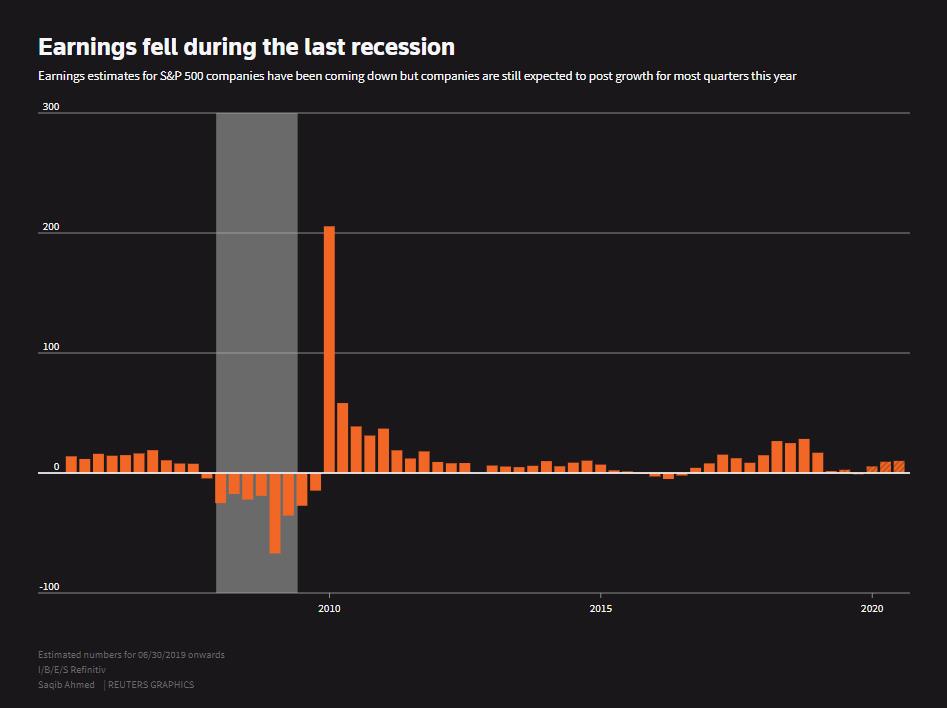 The gap between high-yield and U.S. government bond yields rose ahead of the 2007-2009 recession and then widened dramatically. 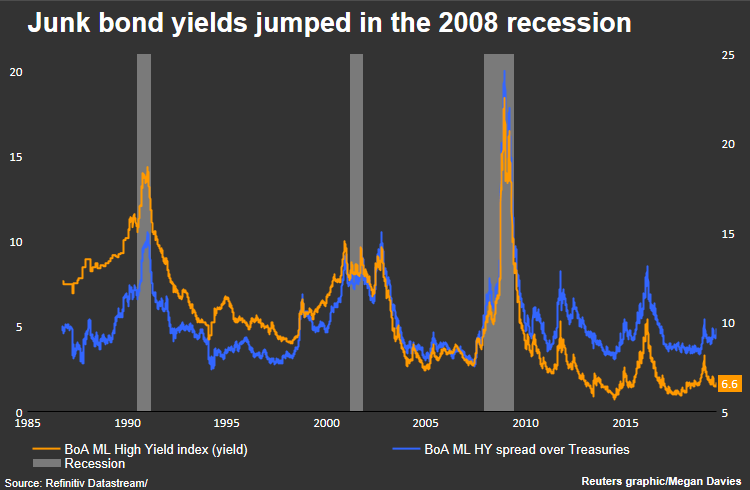 The Cass Freight Index, a barometer of the health of the shipping industry produced by data company Cass Information Systems Inc, logged a 5.3% year-over-year decline in June. That marked the index’s seventh straight month with a negative reading on a year-over-year basis.

“Whether it is a result of contagion or trade disputes, there is growing evidence from freight flows that the economy is beginning to contract,” Broughton Capital analyst Donald Broughton wrote in the June Cass Freight Index report. 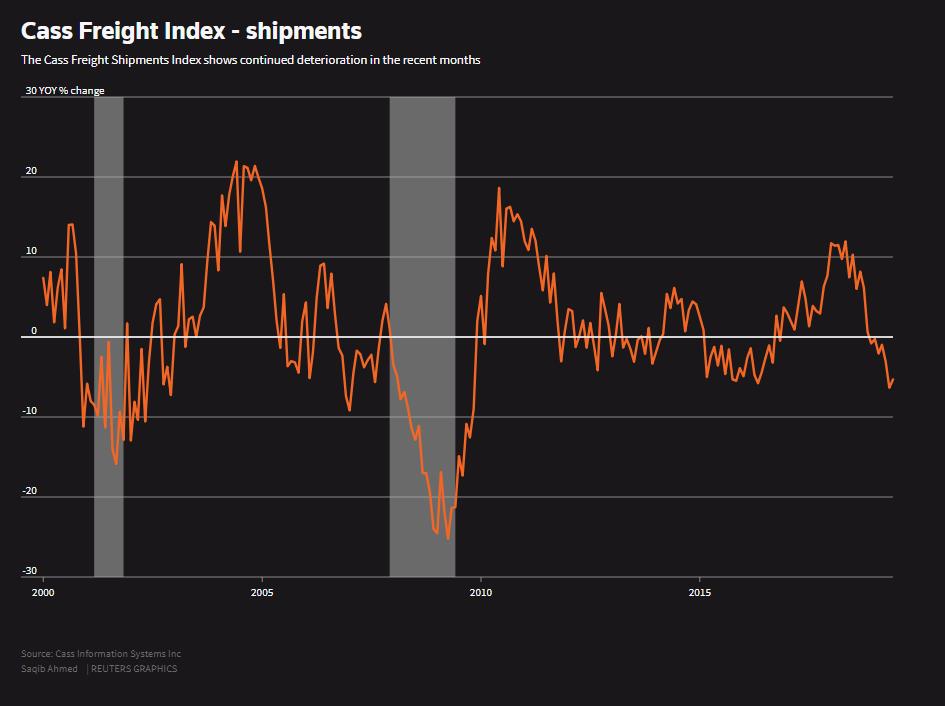 The so-called Misery Index adds together the unemployment rate and the inflation rate. It typically rises during recessions and sometimes prior to downturns. It has slipped lower in 2019 and does not look very miserable.
Source: Reuters (Reporting by Saqib Iqbal Ahmed; Editing by Chizu Nomiyama)