Corn prices in Brazil during Aug. 9-13 continued to rise due to further cuts to the production in 2020-21 by the national agricultural agency CONAB and an increase in international prices.

The second corn crop in 2020-21, which will be marketed during February 2021-January 22, will be below the levels projected in the previous month due to the drought conditions observed in the main producing states and also because of the impact of frost seen since June end, CONAB said in its monthly survey on Aug. 10.

“Prices continued to rise throughout most of the country. Although the cost of importing corn from neighboring countries is lower than those observed in the domestic market, the difficulty in finding available corn should sustain prices at a level high,” CONAB said in its weekly report. 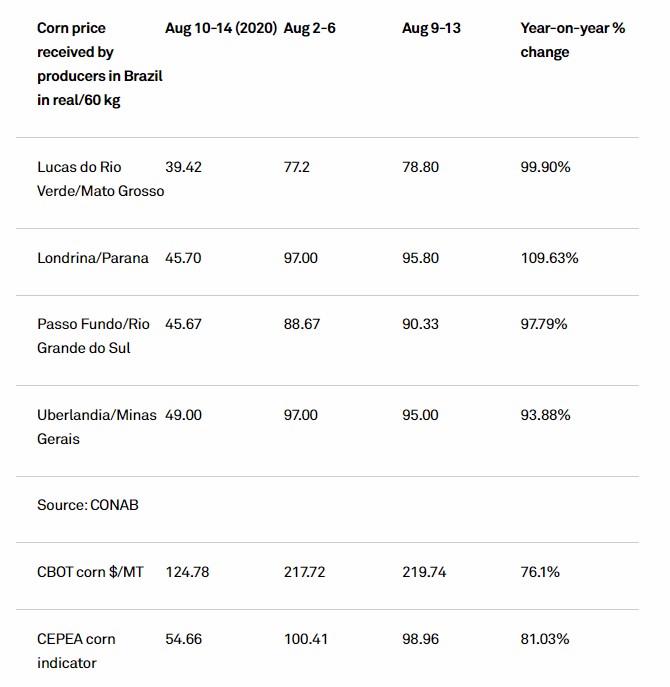 Brazil already imported nearly 1.1 million mt during January-July, compared with 1.37 million mt in the whole of 2020.

Although Brazil is usually the second-largest corn exporter in the world, the southern states often import from Paraguay and Argentina as it is cheaper than transporting corn from the Midwest region of Brazil where the bulk of the corn crop is grown.

The animal protein industry, a major consumer of corn feed, is concentrated in southern Brazil.

FOB Santos corn buyers were at the sidelines as the prices were too high to compete against other origins in the export markets.

For September and October, Argentina was the most competitive option, while the US Pacific Northwest was the best option for the last quarter of the year.

Corn buyers were also absent on the domestic side which made some market participants believe prices could drop in the next few weeks. On the other hand, sellers were not willing to show firm offers without seeing bids.

Reduced Brazilian corn exports are expected to alter the corn imports of its largest buyers—such as Iran, Egypt, and Vietnam—whose imports from Brazil dwindled in July, in comparison with the last several years, the US Department of Agriculture said in its feed outlook report.

“Although some additional corn will likely be sourced by these countries from corn producers other than Brazil, elevated prices and the difficulties of finding full substitute foreign suppliers in the short run are expected to weigh down on their total corn imports,” the report said.

Harvesting of Brazil’s second corn crop is currently in progress.

The second corn crop harvest across nine states, accounting for nearly 92% of the area, was 68.5% complete as of Aug. 14, compared with 76.6% around the same time in 2020, CONAB said in its crop progress report.
Source: Platts