Provident and Progressive will be the fifth and sixth methanol dual-fuel vessels for Proman, to be delivered in 2023 and traded globally.

Proman has finalised an agreement to build two additional 49,900 dwt methanol dual-fuel MR tankers, bringing its total investment in methanol-powered vessels to six newbuildings. Proman will be the sole owner of the Provident and Progressive, alongside the Promise which is due to be delivered in Q3 2022. These vessels join Proman’s expanding fleet, including its three jointly owned methanol dual-fuel tankers with JV partners Stena Bulk.

The new vessels will also be built at Guangzhou Shipyard International (GSI), for delivery in Q4 2023.

The Provident and Progressive will be traded globally for shipping chemicals and clean petroleum products, enabling shipowners worldwide to experience the benefits of these state-of-the-art and 100% renewable-ready methanol-powered vessels.

Each vessel will use approximately 12,500 tonnes per annum of methanol as a marine fuel. Using widely available ‘grey’ methanol produced from natural gas, greenhouse gas (GHG) emissions in the vessels’ normal commercial operations will be significantly reduced compared to conventional marine fuels, including the virtual elimination of sulphur and particulate matter, 60% reduction of nitrogen oxide and 10-15% cut in carbon dioxide. 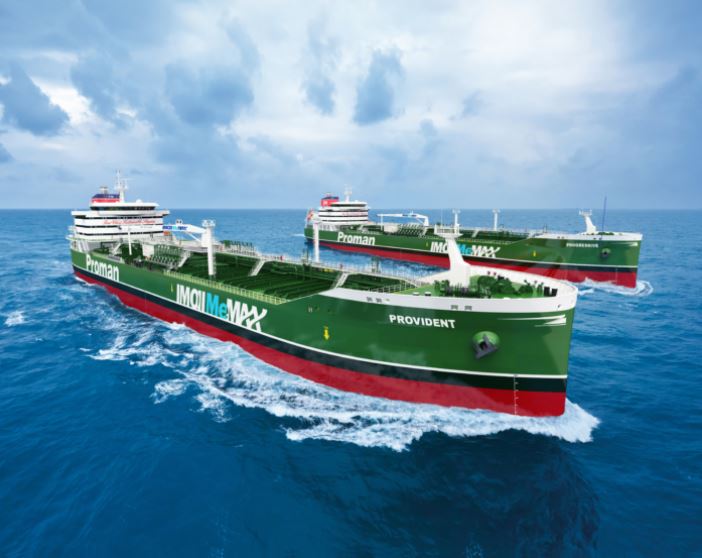 Proman will continue to work with with its trusted partners Stena Bulk for project management of the shipbuilding. Stena will also provide ship management services for the Promise, Provident and Progressive via its subsidiary Northern Marine.

David Cassidy, Chief Executive of Proman, said:
“This is a significant and exciting investment for Proman. It reflects not only our continued growth but also our commitment to leading the way to a greener shipping future. Methanol has huge potential to bridge the gap from fossil to fully renewable fuels, with its clean-burning and biodegradable qualities making it particularly attractive as a marine fuel.

“As the second largest global methanol producer, which we transport to all major bunkering ports, alongside our growing investment in green methanol production and vessel ownership, Proman has a presence at every part of the clean shipping value chain.

“By making these vessels available on the global market, we hope to encourage others to join us on this important journey towards reducing emissions from the international shipping sector.”

Anita Gajadhar, MD of Proman Marketing, Logistics and Shipping, said:
“Proman’s investment in these vessels is testament to our belief in methanol as a ‘future-proof’ marine fuel.

“With regulatory approval from the International Maritime Organisation (IMO) and growing take-up from some of the world’s largest shipping companies, methanol’s global availability, ease of handling and highly scalable sustainable pathway makes it hard to beat as the shipping sector’s pathway fuel to the future.

“With the combined advances in vessel design, engine technology and the use of low-emission methanol fuel, these newbuildings will set a new benchmark for sustainable future-ready MR tankers.”
Source: Proman