Proman Stena Bulk, a joint venture (JV) between a leading global methanol producer Proman and one of the world’s largest tanker shipping companies Stena Bulk, today confirmed that the first methanol-powered newbuild vessel under its partnership has been delivered and is preparing for commercial operation.

Stena Pro Patria will leave GSI Shipyard to load methanol fuel in Ulsan, South Korea and will arrive in Trinidad and Tobago for her Naming Ceremony later this year. The vessel will run on methanol, representing Proman Stena Bulk’s commitment to methanol’s role as part of the shipping industry’s sustainable fuels pathway. With an expected consumption of 12,500 tonnes of methanol marine fuel per annum, Stena Pro Patria will be a low-emission vessel, eliminating local pollutants including SOx and Particulate Matter (PM), cutting NOx emissions by 60% and reducing CO2 emissions versus conventional marine fuels.

The delivery of the Stena Pro Patria represents an important milestone for Proman Stena Bulk. It is a significant step forward as the JV continues its ambition to support the development of methanol as a proven marine fuel and the role it can play as part of global shipping’s urgent transition to a more sustainable future.

With impending regulation from the International Maritime Organisation (IMO) – in the shape of EEXI and CII from 2023 – as well as increasing demand from cargo owners and financiers for higher environmental standards, these vessels set a new benchmark for MR tanker sustainability.

David Cassidy, Chief Executive of Proman, said: “The delivery of the Stena Pro Patria represents a major milestone for the success of our joint venture with Stena Bulk, as well as sends an important message to the market that methanol is a reliable and available marine fuel that can reduce global shipping emissions in the short, medium and long term.

“The vessel’s state-of-the-art fuel consumption and engine technology are important steps towards more sustainable shipping. It will be vital as new low-emission fuels emerge to also focus on energy efficiency. We hope today’s news and our continued investment and commitment will encourage others to accelerate their transition to cleaner fuels like methanol, benefitting from immediate emissions savings while also sending out strong demand signals to the market.” 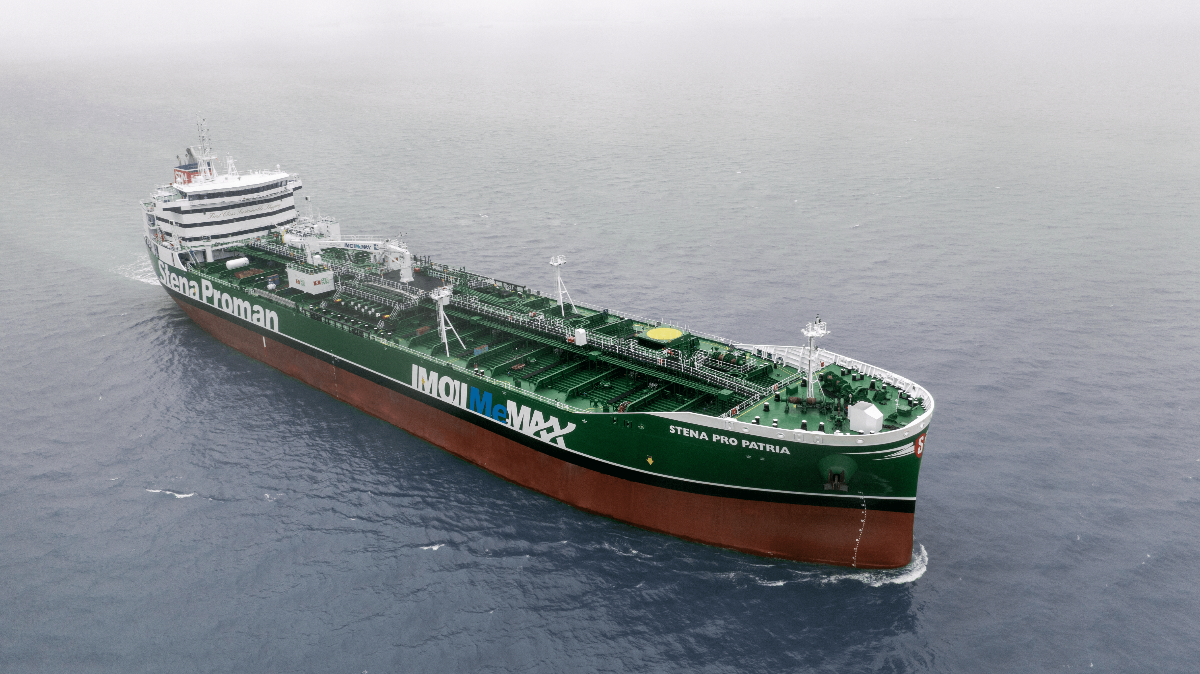 Erik Hånell, President and CEO of Stena Bulk commented: “It is only through collaboration and partnership that we can meet our climate goals. Today’s announcement of a jointly built methanol-powered vessel coming into commercial use is a great example of our successful partnership with Proman, and we hope the first of many major milestones.

“As a company we strive to be a first mover by sending out positive messages that new advanced fuels, as well as technological energy efficiency advancements, are available today. Stena Pro Patria is testament to that.”

Anita Gajadhar, MD of Proman Shipping, Marketing and Logistics added: “We very much look forward to welcoming Stena Pro Patria to our fleet. Today’s delivery is just the beginning of the low-emission methanol transition for our own vessels, and moving forward, for third-party shipping companies too.

“This is a continuation of our journey to develop methanol’s huge potential in the global energy transition and showcases our ongoing commitment to the decarbonisation of the shipping industry.”

Stena Pro Patria is named in honour of Dennis Patrick, an integral member of the Proman family and the former CEO of Proman’s subsidiary Methanol Holdings (Trinidad) Limited (MHTL), who passed away in 2019.

Methanol is already available at over 100 ports worldwide, including at all major bunkering hubs. It is a clean burning, safe to carry and fully biodegradable fuel which provides an immediate reduction in CO2 emissions, virtually eliminates SOx and Particulate Matter, and cuts NOx emissions by 60% compared to traditional marine fuels.
Source: Stena Bulk