Speaking at the event to commission the 4th new Berth, the Contracts Manager for Eiffage Genie Civil the leading contractor for the civil works of the 4th new Berth highlighted that along with the quality works that they delivered on schedule, his project team were very much committed to safety and environmental sustainability. “I am proud to report that over two-million-man-hours were clocked without a single injury” said Mr. Juma.

He also presented the Eiffage Genie Civil Plaque marking the successful completion of the construction works to the CEO of MPS.

Chief Executive Officer of MPS, Mr. Mohamed Samara while welcoming guests disclosed that, among other container handling equipment, an additional 16 gantry cranes (3 STS and 13 eRTG) were on order to meet growing container traffic demands; describing the completion of works for the 4th new Berth as not the end of the Tema Port Expansion. 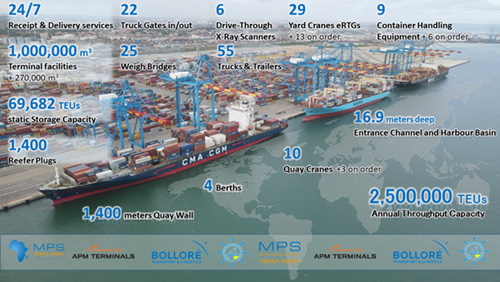 The CEO of MPS went on to outline the growth of the company and the investments made till date. He emphasized that the vision was to harness the location of the Tema Port along with its enabling factors to become the first-port-of- call and a transhipment hub.

“The anticipation was for transhipment to grow with us and here we are, we have done it. Since our establishment, we have carried along the values of safety, security, health, environment, and welfare of human resource. We still hold high these values hence the EDGE certification (Excellence in Design for Greater Efficiency, an innovation of IFC, a member of the World Bank Group) ISO Management Systems ISO 9001, ISO 14001 and ISO 45001 covering quality of service, environment and the occupational health & safety including the Pedestrian-Free Terminal concept that was created by MPS over 10 years ago as well as the recent 2-Stars Green Terminal accreditation received. “

He further intimated that the capacity has been doubled since starting operations in Terminal 3.

“This has not only driven gateway cargo market growth in Ghana but also driven the increase of transit and transhipment trade. We have secured intercontinental transhipment volumes connecting the Far-East trade routes with the East Coast of the Americas and also southern African trade with Europe. “

The Director General for the Port Authority, Mr. Michael Luguje promised that GPHA will continue to create a business-friendly environment for all stakeholders.

“GPHA is satisfied with the progress that has been made. As a landlord and shareholder of MPS, we will continue to provide an enabling environment for container business to thrive, for Ghana’s ports to be the most efficient, most attractive and most secure”, said Mr. Luguje.

The Deputy Minister of Trade and Industry, Hon. Michael Okyere Baafi described the MPS facility as an interplay between infrastructure, industrialization and service sectors providing an important platform for import and export transactions to support development.

The Board Chairman of Ghana Ports and Harbours Authority (GPHA), Mr Isaac Osei disclosed that GPHA’s goal was to ensure the transformation of the port facilities to world class standards by partnering with private stakeholders to improve on the quality of services rendered in the port.

“Terminal 3 is no doubt an impressive world class facility and a perfect example of a successful business partnership between GPHA and its investment partners in MPS. It is laudable that the partnership between GPHA and other shareholders of MPS has thrived and we thank all who worked tirelessly and dedicated time and resources to provide this logistics platform to enhance Ghana’s trading links with the rest of the world.”

He also added that the security of the ports is a priority for GPHA as more tugboats have been acquired and that GPHA is working with the security agencies in the country to enhance maritime security.

The Deputy Minister of Transport, Hon. Frederick Obeng Adom, delivering a speech mentioned that the systems provided by MPS with the support of other port stakeholders has harmonized and improved port clearance system by ensuring seamless, convenient and quick turnaround time in the port clearance processes.

He alluded that new investments in technology and the maintenance of existing technology such as what has been put together in MPS was critical to port operations especially in these times. Government, he said was working on improving transit trade.

“Another facility of the port efficiency within the context of the transit trade is efficient transport access and connectivity to the port. Best practice requires that Port Infrastructure investment is complemented by an efficient transport network to facilitate movement of cargo in and out of the port. I am happy to announce that the Ministry is working on several projects. All these projects are part of efforts by government to upgrade our transport infrastructure to achieve the needed synergies and efficiency of our transport logistics value chain.”

Celebrating the achievements of MPS, the Board Chairman, Nana Osei Tutu Prempeh charged MPS Management to increase the productivity to necessitate the construction of a fifth berth.

“In order to maintain our leadership within the sub-region, there is the need for commitment from management and staff of MPS not to relent on our oars. Efficiency is the hallmark of success and our compliance with ethics and good corporate governance practices and structures would sustain the company for generations to come. “

For the immediate past board chairman of the GPHA, Mr Peter Mac-Manu, MPS will remain an example of Public Private Partnership (PPP) worth emulating.

Chairman Mac Manu further articulated that “It is only the 2nd year of operation and yet MPS has proven that where there is proper partnership, we can reap the expected success.”

The event MC, Frank Ebo Brown, elaborated on the level of the infrastructure investment and the commitment made by the project sponsors. On the back of investments done by the foreign investors, Mr Ebo Brown invited members of the diplomatic corps from the participating countries to comment on the development.

H.E. Ann-Sophie Ave, the French Ambassador to Ghana explained that the 4th new Berth was necessary at this stage to attract more foreign investment.

“Having a facility that enables the swift turnaround of vessels in a record time brings a huge added value, saving cost which is attracting trade and creating opportunities for diverse sectors of the economy and international commerce”.

Netherlands Ambassador to Ghana, H.E. Jeroen Verheul was pleased with the contribution of the Dutch towards the development of an infrastructure of this magnitude for Africa. “APMT which is a shareholder of MPS is a Dutch registered company, again the Netherlands Development Finance Company (FMO) joined the project financing syndication that was led by the International Finance Corporation (IFC) and I am satisfied with Netherlands participation in such a magnificent infrastructure.”

Following the signing of the strategic cooperation agreement in 2015. Danish involvement in Ghana’s maritime sector has been extensive. “For us we are proud to be involved in this, as a seafaring nation, we recognise Ghana’s huge potentials in this sector and know that Ghana’s development is hinged on continuously strengthening its maritime sector”. The Danish Ambassador to Ghana, H.E. Tom Norring said.

The MPS Operations Team Led by Cyrille Lemee, Curtiss Dakpogan and Emmanuel Ohene Addo choreographed an inspiring show demonstrating the MPS OPS organisation and capabilities of the Ship-To-Shore gantry cranes. The guest witnessed an impressive manoeuvre of vessel within the harbour basin as well as the sailing and berthing of vessels alongside the quay wall with the usual assistance from the GPHA Tugboats and crew.

Construction of the MPS Terminal 3 started in 2016 and was inaugurated in 2019. The 400-meter-long 4th Berth of Phase 2 adds up to the 1000 meters of Phase one currently being operated. The 2nd Phase was originally scheduled to be completed in the middle 2022.

The Port of Tema remains Ghana’s largest and busiest port serving not only the nation but also acts as a transit point for many landlocked countries to Ghana’s north.

MPS through its shareholders has since 2007 invested over 1 billion USD in the areas of infrastructure, technology, human resource development and other areas resulting in increased cargo volumes and positioning of the port as the most preferred in the West African sub-region. 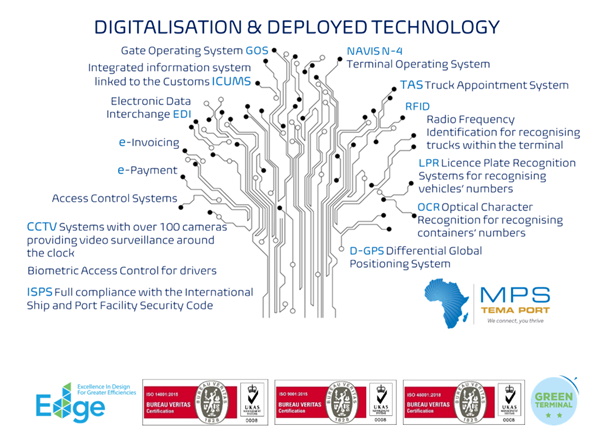 2021-10-25
hellenicshippingnews...
Previous: The shipping crisis in California is now so bad that officials should consider declaring a state of emergency, the head of the California Trucking Association says
Next: Samsung Heavy Industries: Look for Opportunities instead of Risks