Russian president Vladimir Putin said Saturday that Russia is meeting its obligations under the OPEC/non-OPEC crude production agreement, and participants remain committed to the arrangement, despite ongoing uncertainty over world energy market developments.

“As far as we know, all our partners in OPEC, including Saudi Arabia, are not giving up on the agreements that we reached within OPEC+,” Putin said Saturday during a press conference in Beijing, according to a transcript posted on the Kremlin website.

“We have no news, no information from our Saudi counterparts or from any other OPEC members that they are ready to withdraw from these agreements,” Putin said.

“Nobody has come to us with this question. Moreover it seems unlikely as Saudi Arabia initiated the OPEC+ agreement and Saudi Arabia brought Russia to these agreements.” 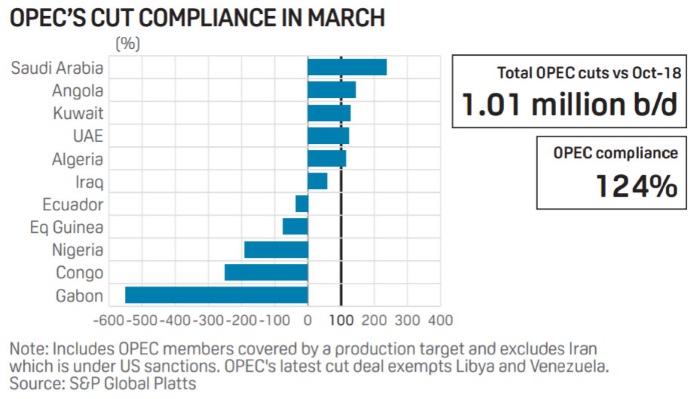 Under the latest production cut agreement, Russia agreed to gradually cut output in the first half of 2019 by around 230,000 b/d from October 2018 levels of 11.421 million b/d. Russia is set to release output data for April – the first month that it planned to fully comply with these volumes – later this week. In early April the energy ministry said it had reached the target at the end of March.

Full-month figures for March indicated that Russia’s crude oil and condensate production stood at 47.782 million mt, or around 11.298 million b/d.

So far Putin, and Russian energy minister Alexander Novak, have given no clear indication of what approach Russia will take on output volumes in the second half of 2019, citing ongoing uncertainty on the market.

This includes output in Iran, which is expected to fall on the US decision to end sanctions waivers for buyers of Iranian crude.

“US decisions related to Iran sanctions, should come into force, if I remember correctly, at the beginning of May,” Putin said. “I can’t imagine how the global energy market will respond to these events.”

Putin said he did not discuss this in detail with his Chinese counterpart Xi Jiping during his visit to China, but said Russia is ready to meet demand from China and other countries.

“We have discussed this with our colleagues, including private companies… the issue is not that we artificially excluding our domestic, but privately owned, companies. No, we will reach agreements with them if we see that they are ready to implement such projects,” Putin said. “But these are, I repeat, capital-intensive projects. Gazprom and Rosneft are major companies… and for companies with smaller capitalization it will be even harder to attract resources.”

“We are not ruling anything out,” he said. “The only question is when the market will be ready for this, when we will be prepared for this technologically and when it will make sense economically. The economic aspect is the most important one.”
GAS ISSUES

“Our Chinese partners are now asking us to consider the possibility of increasing supplies via Power of Siberia, which we will commission at the end of this year. It is technologically possible and we will do it,” Putin said.

Gazprom plans to start injecting Russian gas into the 38 Bcm/year capacity Power of Siberia pipeline in the third quarter of 2019 ahead of first commercial flows to China at the start of December.

Gazprom has said it expects to begin gas exports to China at a level of around 5 Bcm/year in the first year of operations through the line.

Putin also discussed gas transit to Ukraine, with the current transit agreement due to expire at the end of 2019.

If the two sides fail to come to an agreement on transit from January 1, 2020, there could potentially lead to disruption of Russian gas supplies to Europe.

“And if there is no transit? You understand that then there will be no reverse flows. Reverse flows are virtual,” Putin said.

He added that Ukraine currently receives gas that is twice as expensive as it could be and if it received gas directly from Russia it would be a minimum of 25% cheaper.

Russia, Ukraine and EU representatives may meet in May to discuss the issue – the first such meeting since Volodymyr Zelenskiy was elected president of Ukraine.
Source: Platts

2019-04-30
hellenicshippingnews..
Previous: Why The IMF Is Wrong About Saudi Arabia Needing $85 Oil
Next: The tipping point: How surging oil prices can hurt the world economy