Qatar’s reasons for exiting OPEC look muddled. The tiny Persian Gulf sheikhdom says it wants to concentrate on building on its position as the world’s biggest exporter of liquefied natural gas (LNG) instead of being a minor player in an oil cartel dominated by Saudi Arabia. Aside from saving on membership fees, leaving the group has few benefits and many risks.

Politics had nothing to do with the decision, which came as a complete surprise to OPEC and its allies, according to Qatar’s new energy minister Saad Al-Kaabi. At a press conference in Vienna on the sidelines of tense talks between the world’s most powerful oil men this week, he said Doha was a small oil producer and it had very little influence over OPEC’s decisions.

True, Qatar pumped daily just over 600,000 barrels of crude oil last month out of an ocean of over 33 million b/d produced by OPEC as a whole, according to a survey of output by S&P Global Platts. However, bringing to an end 60 years of membership comes as Doha is isolated by its powerful Gulf neighbors Saudi Arabia and the UAE. Both regional superpowers are leading an economic and diplomatic blockade after accusing the country’s rulers of supporting extremism in the region. 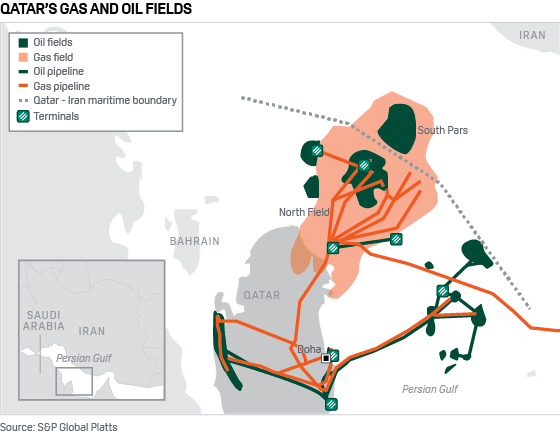 “I was behind the recommendation for this, and I have been known as the gas man for a long time,” said Al-Kaabi. “So it just took time to go and get approvals from your leadership, because it’s a sovereign decision, not a ministerial decision, to leave OPEC.”

Al-Kaabi isn’t the first Qatari official to brand themselves a “gas man” but he is the first to turn his back on OPEC. His predecessor and mentor Abdallah bin Hamad al-Attiyah managed to build the country’s LNG industry from scratch and punch above his weight in the cartel. Al-Attiyah – who stepped down as energy minister in 2012 – was one of OPEC’s most influential presidents and was even invited to head the group as its secretary general.

In more recent history, Qatar played an active leadership role in 2015 building bridges behind the scenes with Russia. This early outreach eventually led to the formation of an alliance with OPEC to cut production and reverse the worst crash in oil prices in a generation. OPEC arguably gave Qatar a more influential voice at the world’s most important energy price setting table, which it has now voluntarily sacrificed. Under closer scrutiny the decision to leave looks flawed and even dangerous if it provokes retaliation in the Middle East.

Not all Qataris were as diplomatic as the country’s energy minister when justifying the surprise move. And who can blame them after two years of political and economic isolation. Saudi Arabia has threatened to build a canal between the two countries to create a physical barrier – such is the enmity and bad blood between the former allies. Meanwhile, Abu Dhabi has decreed showing support for Doha on social media is a crime in the emirates.

“This organization has become useless and adds nothing to us,” Sheikh Hamid bin Jassem, Qatar’s former prime minister and influential royal, tweeted soon after the decision to leave OPEC was announced. “It is only being used for purposes aimed at harming our national interest.”

Of course, Qatar isn’t the first country to grow tired of OPEC’s bickering and the costs of participating in its endless meetings in Vienna. Gabon, withdrew only to rejoin 20 years later. Likewise, Indonesia left, came back and resigned again in 2016 in disgust over production cuts.

For energy markets focused on fundamentals Qatar’s exit could mean more uncertainty and volatility. It also makes OPEC look increasingly like a duopoly between Saudi Arabia and non-member Russia, which has been given a seat at the table anyway. Their increasing domination over decisions on output and the influence of US President Donald Trump could gnaw away at unity within the cartel. Qatar’s withdrawal comes as OPEC has tried to recruit new members, including the Republic of Congo and Equatorial Guinea, to try to remain relevant in a world where the US is now a net exporter of crude and the biggest producer.

“The exit of Qatar is suggestive of growing dissatisfaction among OPEC nations with the Saudi’s leadership,” said Ashley Kelty, oil and gas research analyst at Cantor Fitzgerald. “We’d suspect that many of the members are wary of how much influence the US has over Saudi Arabia, and whether this leads to decisions that are not necessarily in the best interests of OPEC.”

Iran has gained from Doha’s withdrawal. Isolated by US sanctions aimed at restricting its oil production, Tehran has used the Qatari decision to strengthen its own negotiating position within OPEC and managed to squeeze a valuable concession on production cuts of 1.2 million b/d agreed Friday after days of arduous talks. Qatar and Iran maintain cordial relations despite traditional Arab political allegiances and both share access to the world’s largest offshore natural gas field in the Persian Gulf.

Although Qatar accounts for less than 2% of OPEC’s crude output its overall importance to global energy supply is much greater. Combine its near 80 million mt/year of LNG and significant output of gas condensates and the tiny sheikhdom has a total output equal to about 5 million b/d of oil equivalent. Its plan is to boost LNG output by 30% to 110 million mt/y, but it is unclear if this goal will be more attainable sitting outside OPEC.

If its new status outside the cartel adds to the growing risks and challenges of investing in Qatar then probably not. Leaving OPEC may serve as a snub to its rivals but it leaves Doha looking isolated and exposed when it needs friends the most.
Source: Platts

2018-12-12
hellenicshippingnews.
Previous: Firms set up LNG trading desks in Singapore to capture Asian growth
Next: The Oil And Gas Situation: A Time For Setting Records