During January-April 2019, four incidents of unauthorised boarding of ships in locations of close proximity to each other were reported in the western sector of Singapore Strait.

With the occurrence of four incidents in close proximity to each other within a period of three months, ReCAAP ISC recommends all ships, particularly tug boats to exercise enhanced vigilance, adopt extra precautionary measures and report all incidents immediately to the nearest coastal State.

The ReCAAP ISC urges the relevant littoral States to step up surveillance, increase patrols and respond promptly to all reports of incidents.

Detail of Incidents
The ReCAAP Focal Point (Singapore) reported to ReCAAP ISC the occurrence of four incidents in locations of close proximity to each other in the Singapore Strait during January-April 2019. Refer to the map below on the approximate location of the four incidents. 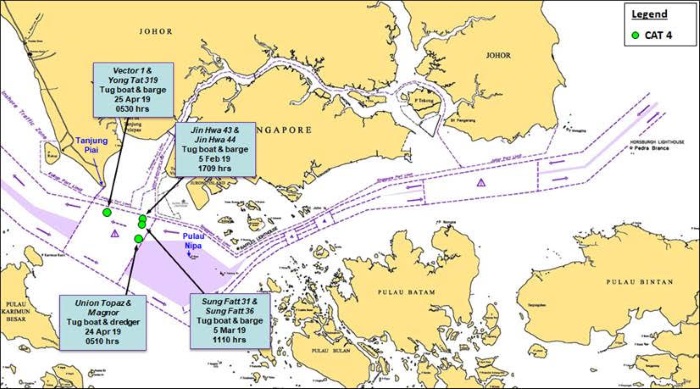 The details of the incidents are described as follows:

a. On 5 Feb 19 at about 1709 hrs, a Malaysia-registered tug boat, Jin Hwa 43 towing barge Jin Hwa 44 was underway in the Singapore Strait when some perpetrators boarded the barge from a few small boats. The barge was laden with scrap metal. The master of the tug boat reported to Singapore’s Vessel Traffic Information System (VTIS) and Singapore Police Coast Guard. The crew was safe. The master later reported that the perpetrators had left the barge with some scrap metal. The tug boat and barge continued her voyage to Penang, Malaysia.

b. On 5 Mar 19 at about 1110 hrs, a Malaysia-registered tug boat Sung Fatt 31 towing barge Sung Fatt 36 was underway in the Singapore Strait when 11 perpetrators boarded the barge from two small crafts. The barge was carrying scrap metal and bound for Penang, Malaysia. At about 1145 hrs, the master reported that the 11 perpetrators escaped in their small crafts with some scrap metal. The crew was safe. The master of the tug boat reported the incident to Singapore’s VTIS who initiated the safety navigational broadcast and notified the Singapore Police Coast Guard and the Republic of Singapore Navy (RSN).

c. On 24 Apr 19 at about 0510 hrs, a Cyprus-registered tug boat, Union Topaz towing a backhoe dredger, Magnor was underway at approximately 5 nm west-north-west of Nipa island, Indonesia when two perpetrators boarded the dredger. Two wooden boats were sighted alongside the backhoe dredger. The master shone light at the backhoe dredger, and the two perpetrators escaped via the wooden boats. The crew was safe and no items were reported stolen. The pilot on board the tug boat reported the incident to Singapore’s VTIS who initiated the safety navigational broadcast and notified the Singapore Police Coast Guard, the RSN and the Indonesian authority.

d. On 25 Apr 19 at about 0530 hrs, a Malaysia-registered tug boat, Vector 1 towing barge Yong Tat 319 was underway off Tanjung Piai, Malaysia when three to four perpetrators boarded the barge. The master reported the incident to Singapore’s VTIS who informed the Malaysian Maritime Enforcement Agency (MMEA). The crew was safe and no items were reported stolen.