2020 marked the implementation of the much anticipated global 0.5% m/m sulphur cap regulation, commonly referred to as IMO-2020. However, the potential consequences from the fallout of IMO-2020 were overshadowed by the impact of COVID-19.

The pandemic also forced the International Maritime Organization (IMO) meetings planned to be held between March and July 2020 to be postponed and reconstructed on a virtual platform during the later part of this year, which effectively slowed down the pace of some key work done on the regulatory front. Even though the challenges posed by the pandemic remain a crucial issue for the maritime sector, it is not the only one, as the effects of climate change demand environmental issues to remain a high priority.

To assist members with IMO-2020 sulphur regulations and challenges posed by COVID-19, the Standard Club established dedicated teams and published guidance on these issues, details of which are available on the club’s website. Additional details of the SOLAS amendments that entered into force on 1 January 2020 were illustrated in the club’s news-alert dated 13 January 2020.

The regulatory wheel keeps turning and over the next 12 months there will be numerous regulatory changes related to crew, safety, environment, and cargo implemented by the IMO and International Labour Organization (ILO). This article provides an overview of some of the important international regulations that will enter into force in end-2020 and 2021, including the European Union (EU) requirement in relation to ship recycling.

Ships that are subject to MLC compliance will be required to have in place, within their Seafarer Employment Agreements (SEA), a provision to ensure that SEA’s continue to remain in effect while a seafarer is held captive on or off the ship due to piracy or armed robbery against the ship, regardless of whether the date fixed for its expiry has passed or any notice to terminate it has been issued. These amendments are set to enter into force on 26 December 2020.
These amendments place an obligation on shipowners to continue to pay wages and other entitlements, under the SEA and any Collective Bargaining Agreement (CBA), including allotments, during the entire period of captivity. As such, members are recommended to review their crew employment contracts to ensure that there are no pre-existing references that contravene the 2018 amendments.

From 31 December 2020, all EU flag and non-EU flag ships calling at EU ports and anchorages are required to have a certified inventory of hazardous materials (IHM) on board.
On 20 October 2020 the European Commission (EC) has issued guidelines urging the EU port State authorities to recognise the challenges faced by the shipping industry and apply a harmonised approach temporarily for a limited period of 6 months after the entry into force of the IHM-related obligations for existing EU-flagged vessels and non-EU flagged vessels calling at EU ports (i.e. until 30 June 2021).
As per the EC guidelines, ships arriving at an EU port after 31 December 2020 without carrying on board a valid IHM or semi-completed IHM will need to provide evidence of all the measures that were taken to undertake the IHM work and obtain the required certification and documentation.
The EU Member States may exercise certain discretion when it comes to enforcing the regulation, for example where a shipowner has endeavoured to achieve certification within the deadline but has been unable due to factors outside their control.
It is difficult to envisage what such discretion might look like or the likelihood that it will be consistent from port to port. Therefore, it is recommended that members concentrate on the elements within their control and ensure as a minimum that they have:

The IMO has encouraged Flag States to ensure that cyber risks are appropriately addressed in safety management systems (as defined in the ISM code) no later than the first annual verification of the company’s Document of Compliance (DOC) after 1 January 2021.
The number of recent attacks on major shipping companies clearly demonstrates that cyber vulnerability is an emerging risk. As such, members are recommended to understand the threats, identify vulnerabilities, assess their risk exposure, develop protection and detection measures, establish contingency plans, and should a cyber incident occur, know how to respond and recover. For further details, members are recommended to refer to the club’s publication on cyber risk management.
Amendments to the 2011 Enhanced Survey Programme (ESP) code – MSC.461(101)

The 2011 ESP code, as required by SOLAS XI-1/2, covers mandatory survey requirements for oil tankers and bulk carriers (including ore and combination carriers) of 500gt and above. IMO’s Marine Safety Committee (MSC) at its hundred and first session (MSC 101) adopted a resolution on amendments to the 2011 ESP code to include:

Members are recommended to take note of these amendments, that will enter into force on 1 January 2021, and will ensure harmonisation between the IMO and IACS requirements.
Amendments (05-19) to the International Maritime Solid Bulk Cargoes (IMSBC) code – MSC.462(101)

Amendments 05-19 to the IMSBC code, which have been in place on a voluntary basis since 1 January 2020, will become mandatory on 1 January 2021. These include the following:

• The ‘characteristics’ table, has been replaced for each individual cargo schedule to clarify the Hazard Classification (subsidiary hazard(s) and MHB).
• A notational reference has been provided for materials hazardous only in bulk (MHB) as a separate cell of the characteristics table. The hazards are notated as follows: 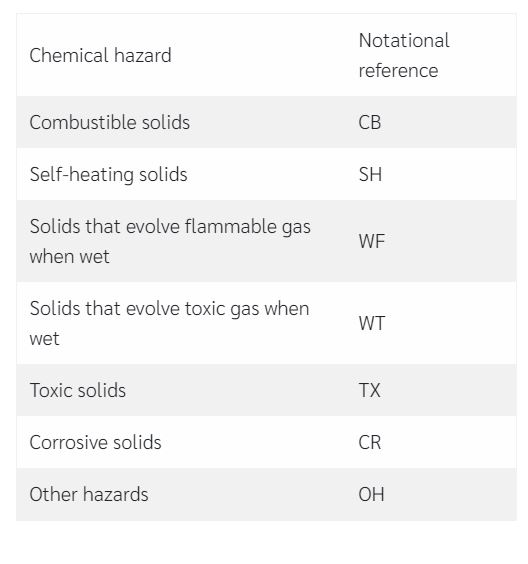 The following new schedules have been added in Appendix 1: 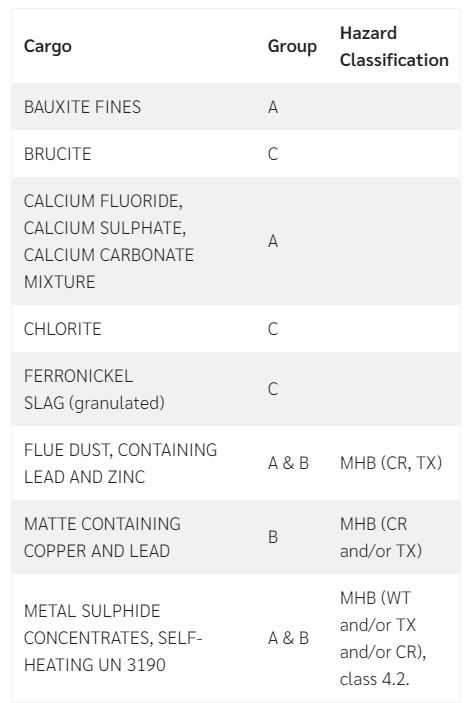 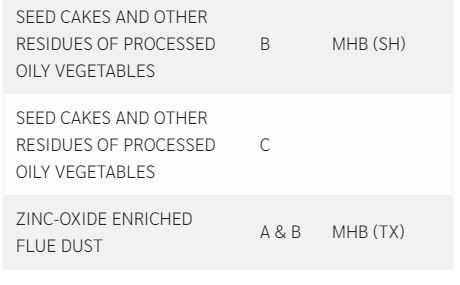 • The existing individual schedule for ‘Seed Cake (non-hazardous)’ has been deleted.
• A new test procedure for determining transportable moisture limit (TML) of bauxite cargoes has been included in Appendix 2. It is called the “Modified Proctor/Fagerberg test procedure for bauxite”.
• Following new cargoes have been added in MSC.1/Circ.1395/Rev.4 – Lists of solid bulk cargoes for which a fixed gas fire extinguishing system may be exempted or for which a fixed gas fire extinguishing system is ineffective.
• FLUE DUST, CONTAINING LEAD AND ZINC
• MATTE CONTAINING COPPER AND LEAD
• ZINC OXIDE ENRICHED FLUE DUST

Members are recommended to ensure that their vessels comply with the amended IMSBC code (05-19) requirements from 1 January 2021 or earlier if required by the vessel’s Flag State or the competent authority at a port of call.
Amendments (40-20) to the International Maritime Dangerous Goods (IMDG) code – MSC.477(102) (voluntary implementation from 1 January 2021)

The IMDG code is regularly reviewed and updated every two years to take into account new requirements for existing dangerous goods or new substances.
The latest amendment (40-20) is related to segregation requirements for alcoholates; segregation in relation to liquid organic substances; classification and transport of carbon, following incidents involving the spontaneous ignition of charcoal; classification of UN portable tanks for multimodal transport; and provisions for labels.

These amendments will enter into force on 1 January 2022 but may be applied voluntarily by some contracting governments from 1 January 2021.
Members who are involved in the transport of dangerous goods are recommended to pay due attention to their Flag State requirements for ships’ compliance.
Amendments to MARPOL Annex II – MEPC.315(74)

The amendments to MARPOL Annex II, include a new definition of ‘persistent floater’; and Regulation 13 (Control of discharges of residues of noxious liquid substances) impose a stricter prewash and discharge requirement after unloading of persistent floaters when the port of unloading is located inside certain areas (Northwest European waters, Baltic Sea area, Western European waters and Norwegian Sea).
Additionally, the standard format of the Procedures and Arrangements (P&A) manual (Appendix IV of MARPOL Annex II) has been revised to incorporate prewash procedures and instructions on how to deal with tank washings for persistent floating products. Members are recommended to ensure that the P&A manual corresponding to the revised standard format is approved and provided on board by 1 January 2021.
Amendments to the International Code for the Construction and Equipment of Ships carrying Dangerous Chemicals in Bulk (IBC code) –MSC.460(101) & MEPC.318(74)

Amendments to the Code for the Construction Equipment of Ships Carrying Dangerous Chemicals in Bulk (BCH code) –MSC.463(101) & MEPC.319 (74)

The main points are listed below for reference:

Members need to ensure that new certificates complying with these amendments are on board from 1 January 2021. All loading after this date must be in accordance with the new certificates. When a cargo is loaded before 1 January 2021, and unloaded after this date, the relevant IBC/BCH code provisions at the time of loading should apply until the cargo has been unloaded.
Amendments to MARPOL Annex VI –MEPC.286(71) – Designation of the Baltic Sea and the North Sea Emission Control Areas for NOx Tier III control

Nitrogen Oxide (NOx) is one of the gaseous pollutants from ships regulated under the MARPOL convention. Under Regulation 13 of MARPOL Annex VI, three tiers of Nitrogen Oxide (NOx) emission limits are set for diesel engines with a power output higher than 130kW, i.e., IMO Tier I, Tier II and Tier III. Each Tier limits the NOx emission to a specific value based on the rated engine speed.

Diesel engines for installation on a ship constructed on or after 1 January 2016 are subject to IMO Tier III requirements when the ship is operating in a NOx Tier III emission control area (NOx ECA) designated under Regulation 13 of MARPOL Annex VI.

Currently, only the North American area and the United States Caribbean Sea area are designated as a NOx ECA. From 1 January 2021, the Baltic Sea and the North Sea ECAs (currently ECAs for Sulphur Oxide (SOx)), will be extended to also cover NOx.

Essentially, this means that engines with a power output of more than 130kW, to be installed on vessels constructed on or after 1 January 2021, must be Tier III certified if they are to operate inside the Baltic Sea and the North Sea ECAs (including English Channel).

Tier III is not a retroactive requirement; hence, it will not be applicable to existing engine installations; unless there is a replacement or additional engines are installed on existing ships on or after 1 January 2021.

Members who are placing orders for newbuild ships (keel laid on or after 1 January 2021) and intending to trade in NOx ECAs, will need to ensure that compliant engines are supplied, i.e., Tier III engines or Tier II/III engines under Regulation 13 of MARPOL Annex VI (Tier II/Tier III engines being capable of operating at Tier II status outside of NOx ECAs and Tier III status when the ship is operating within a NOx ECA).

The amendments to MARPOL Annex IV impose restrictions on the discharge of untreated sewage from passenger ships (those carrying more than 12 passengers) in the Baltic Sea Special Area.
This means that from the relevant effective dates (as mentioned below), passenger ships operating in the Baltic Sea will be obliged to either treat their wastewater by using an approved sewage treatment plant (meeting effluent standards in accordance with the resolutions MEPC.227(64) and MEPC.284(70)), or discharge it when in port by using port reception facilities (PRFs).

Members operating passenger ships in the Baltic Sea area need to be aware of these requirements and ensure logistical arrangements are in place for discharge of untreated sewage to port reception facilities. For further details on the ‘Regulations for the Prevention of Pollution by Sewage from Ships’, members are recommended to refer to the Standard Safety, September 2016 publication and HELCOM guidance.

Members are also reminded that, other than in cases of purely accidental discharge, P&I cover for fines related to MARPOL violations is only available on a discretionary basis.
Source: The Standard Club